Missed Anniversaries and Something Is Really Boring.

On Monday, I missed the 127th anniversary of the opening of the Brooklyn Bridge.  I love the Brooklyn Bridge, but I've talked about it before and it's so famous, you guys probably know quite a bit about it without me babbling, so I'm not gonna say a whole lot more about it.  If you want to know more, there's a pretty cool video posted here.

The one I'm going to talk about is the Brooklyn Battery Tunnel whose anniversary was yesterday.  It opened on May 25th, 1950, making it 60 years old.  The tunnel connects Brooklyn to the Battery in Manhattan.  (The Battery is the southern-most tip of Manhattan and is named for the artillery batteries that were originally stationed there.)

Here's a picture of the Tunnel.

O.K. It's not really a picture of the tunnel.  This shot is from the Brooklyn Heights Promenade.  If you embiggen the picture, you can see a white building on Governors Island in the left side of the frame, and the Brooklyn Bridge is in the right side of the frame.
There are a total of four ventilation shafts for the tunnel which are capable of completely replacing the air in the tunnel every 90 seconds at full blast.  Here's a shot of the tower on the Manhattan side, which, you may recognize as the office entrance for the Men in Black. 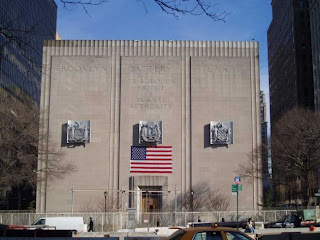 Construction on the tunnel actually began in October of 1940, but it was shut down in 1942 for the duration of WWII.  Originally, Robert Moses had wanted to build a bridge.  The bridge idea had a great many detractors who complained that the view would be destroyed, and that the approaches would eradicate too many things in lower Manhattan, among them, the NY Aquarium which stood on the Battery at the time.  Ultimately, Franklin Roosevelt vetoed the bridge in favor of a tunnel, reasoning that a bridge, seaward of the Brooklyn Navy Yards might impede shipping up the East River.  Since the Brooklyn and Manhattan Bridges were already standing to seaward of the Navy Yards, it's widely accepted that the decision was, more or less, dictated by Eleanor Roosevelt who was well-known for here involvement in NYC civic affairs.
Side note:  Robert Moses is held up, both as a 20th Century hero and villain.  At one time, he simultaneously held 12 separate titles in both State and City Government, including NYC Parks Commissioner, President of the Long Island State Parks Commission, and Chairman of the NY State Power Commission.  With the massive authority he wielded, he oversaw the building of 117 bridges, tunnels, parks, housing projects and highways/parkways.  During the 50's he lost his fight to build two  below-grade and elevated highways crossing Manhattan and connecting the East River Bridges to the Hudson River tunnels.  There would also have been a connector 4-lane highway which would have gone through the middle of Washington Square Park.  Instead of this: 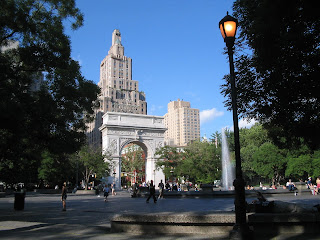 ...we would have had something that looks like this: 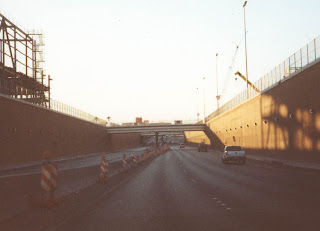 I'm glad he lost those battles.
Anyway, back to the tunnel. At 9117 feet, it's the longest continuous underwater tunnel in North America.  It was designed by Ole Singstad, but when construction was re-started after WWII, Robert Moses oversaw construction.  Construction under Moses began to spring leaks in the walls until the tunnel walls were retro-fitted under Singstad's original designs.
When the tunnel first opened, the toll was 35¢.  Now, it's $5.50.  For a gallery of really terrific pictures of the tunnel under construction, here's a link to an article on Gothamist.
And just before I close, by way of contrast, let's talk briefly about the 2nd Avenue Subway.  As it stands right now, there's only one subway line (the 4, 5 and 6 trains) running up the East Side of Manhattan. (All three share the same tracks in Manhattan - the 6 is a local train and the 4 and 5 branch out into separate routes in Brooklyn and The Bronx.)  Two elevated lines on the East Side were torn down long ago, the Third Avenue line in 1955 and the Second Avenue Line in 1940.  To solve this problem, a 2nd Avenue Subway has long been in the planning stages.  As early as 1929, there were plans under consideration.  Well, the finally broke ground for the line -- in 1972.  Portions of the tunnel were dug and even partially finished (minus any rails or utilities), but work stopped quickly as NYC went broke.
Well, work began again recently, and last week, they started digging additional tunnels to connect the portions already dug.  The 2nd Avenue Subway is scheduled to open at the end of 2016.
If you looked at the Brooklyn Battery Tunnel pictures, you'd have seen a bunch of guys digging  and hauling stuff out by hand.  Get a load of the boring machine that's digging its way under 2nd Avenue.  That sucker digs 50 feet per day -- the full size of the needed excavation while loading its own conveyor with the ground-up rock and shooting it to where it can be trucked off.  And yes, I'll admit that 1.) I think the fact that construction is proceeding again is pretty cool and 2.) I'm damned glad I don't live or work anywhere near 2nd Avenue.  The work may be underground, but half the street above it is closed down, making traffic a mess.  And the vibrations and noise definitely make their way to the surface even though the work is 70' below street level.
Posted by Nathan at 1:43 PM

Thanks for the occasional local history lesson. I live in Seattle and haven't had much opportunity to explore NYC.

That should change next year, though, as I'll be on the East Coast for an extended visit when my daughter graduates from college. She definitely plans on playing tour guide for my wife and I.

I'm glad you like them C.J. Where is your daughter going to school (if you don't mind spilling that bean)? If she's not up on what to see in NY, feel free to email me for some non-touristy things to do/see in the city.

My daughter will be starting her senior year at Bryn Mawr College outside of Philadelphia next fall. And she's actually heading to NYC next week for a summer internship in Brooklyn.

She also gets to spend the occasional weekend with friends in NYC during the school year, so she's definitely more familiar with the city than I.

Thanks for the offer about non-touristy things. I'll pass along your offer to her.