What follows is an experiment in MultiPosting, LiveBlogging, GuestBlogging and some other crap.

I'm sitting in the bar at the W Hotel in Midtown Manhattan with John the Scientist. He has vodka in front of him and I've got whiskey.

How have we gotten here? The story so far is short and violent.

Immediately before coming here, we were at the Oyster Bar at Grand Central Terminal. We got into an argument about gun control. He thinks everyone should be required to have a gun. I think everyone is too stupid to own a gun. It turned ugly. So I shot him.

Oh, shut the fuck up. It's only a flesh wound. A little more vodka and he'll be fine.

The bad part is that we had to leave that bar.

Hah! The only weapon Nathan owns is a .32 Derringer that must have come from his great-grandfather. Couldn't stop a hamster at 3 meters. Flesh wound. My toddler inflicts worse.

Now we've stopped at a yuppie hotel bar in midtown because Nathan is nothing if not a yuppie. I'm drinking vodka to get in the mood for the real Russian bar to come. I just hope we don't run into any of my old "contacts".

And I have to type this on a fucking MAC.

We've been eating exclusively human food on this visit, but John is threatening me with some other "not-food" item for the next visit. I've gotta pee. I'll let him tell us all at the same time.

Actually, we might swing by the place that sells Durian and bear gall bladders.


Really. I'm leaving the fucking room if that shows up.

Also, I feel safe in revealing to you that John has revealed certain secrets to me this evening. My head. It hurts. And you know that saying that goes "I could tell you but then I'd have to kill you?" In this case, if I breathe a word, it's me I have to kill.

(I'd say this might explode Michelle's head, but with the hair, who could tell?) 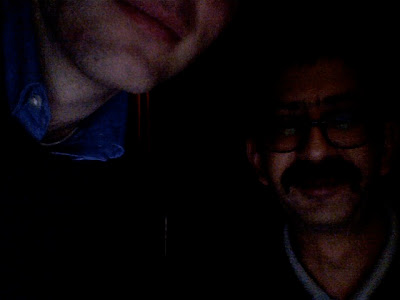 So, GF points out that the computer has a camera. Here we are. John's hiding as usual...douchbag.

We've spent the last 15 minutes trying to decide whether or not the guy at the other end of the bar is Ken Jennings. We've decided...probably not...Mormons aren't supposed to drink so much.
Posted by Nathan at 6:50 PM

Biotch! I SHOT THE MOFO. Ain't no foto evidence.

And when I pulled the "bullet" out of my arm hair, I asked him if he wanted it fitted nasally. :D

I meant of the drinking, not of the gratuitous violence.

and is that Crystal Skull vodka you are drinking?

Uh, your Mac has a built in camera.

Can men be trollops or is it a gender-specific term?

I can't even imagine how thick the f-bombs must be falling after you two have had a few drinks and some crappy, masochistic non-food item.

LOL. You two are awesome. Thanks for the good laugh. I needed it.
Yay UCF!

(Also, thanks, once again to Anon GF for being helpful. You rock.)

Love the dark pic of the shadowy characters! Skulking and drinking in the shadows. With gratuitous violence, no less! There's got to be a book there. Or at least a chapter. :)

Snort. You two are a menace to all right thinking people.