Damn, I Wish I Had A Good Headline!

I was trying to find a great quote about people getting sprung from prison, but everything I found was a whole section of dialog. Great stuff, but way too long.

Anyway, as you might have figured, I'm getting sprung from the hospital either later today or first thing tomorrow. I'm hoping for sooner, rather than later; I've really had enough of this place. There's one last thing I wanted to leave you with about the place (unless, of course, they give me something else to boggle about before they cut me loose). Some of you have sort of wondered what sort of Third-World place I'd found myself in here. The truth is...it's a fine hospital in the middle of Brooklyn with mostly a great staff of Doctors, Nurses and Techs.

That having been said, during my first few days here, the heat was set to "Sub-Tropics". The nurses would complain every time they stepped into the room and immediately started sweating. So, the day before yesterday, some guys came in and pulled the heating unit out of it's frame under the window, did some stuff to it somewhere else for a while, and then returned it.

I didn't notice anything different about how it was working, but they came back yesterday and took it away again. Around 6:30 p.m., I noticed they'd never brought it back. What kind of freakin' hospital thinks it's O.K. to take the heater out of a room in the middle of winter without bringing it back. Hey, it's not like I was trying to live in an igloo or something (the rest of the floor and every other room has heat cranking, so some of it's getting here), but there really ought to be heat here in NYC in the 21st Century.

But guess what? I don't give a shit. I'm getting sprung!

(Oh, and suggested headlines are welcome as usual...but no prizes today.)

And one last thing. A friend of mine managed to score an invite to one of the Official Inaugural Balls (I think Eastern States). She managed to get pretty close to all the excitement. I am seriously fucking jealous. 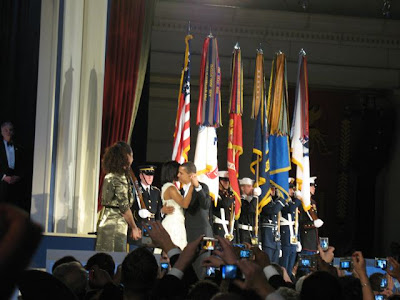 Gone in a New York minute!


Glad you're finally getting out.

Glad you no longer have a zombie pancreas, because I really didn't want to have to shoot you.

Does this mean you're allowed to eat real food?!

So glad you're feeling well enough to go home, Nathan. I know Anon GF and Tuefel and Widget will take good care of you!

I'm eating normal food if you consider what this place is giving me normal. (those jokes are too easy.)

I do have to admit that based on what they've served me, I don't know if I've developed an aversion to coffee, or if what they're serving just isn't coffee. We'll see when I get home.

And Anne? Is LuLu just going to scratch my eyes out from jealousy?

"Rita Hayworth And The Pancreatic Redemption."

"The Pancreatic Code"
"Your Pancreas is your Friend", starring the Wiggles
"Indiana Jones and the Golden Pancreas"

Glad you're going home! Will you get to eat real food, too?

Since the heater's missing..

Ooops... Please pass on my abject apologies to her highness, LuLu.

Tania just came up with the perfect title for your post (though she created it to describe Michelle's Dad's situation)...
Hospitalbreak!