In All Fairness, He's Easy To Miss. 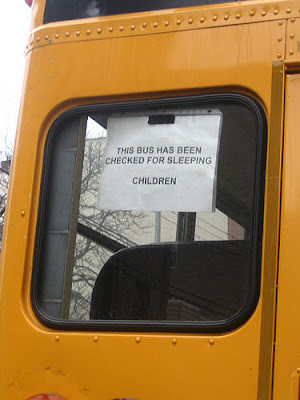 So, there's this 22 year old guy. He's got cerebral palsy and other developmental problems so he attends a special needs school. At about 3:00pm on Wednesday, he got on the bus to go home from school.

Bear in mind, that a few years ago, there was a rash of stories about kids falling asleep on the bus and then drivers not noticing before locking up the bus back at the garage. This was a bad thing. So the city started telling the bus companies that they'd have to have a second adult on the bus to make sure all the kids got to where they were going. Linda Hockaday was apparently the Bus Matron on this kid's bus. Since the kid has to wear a helmet and gets strapped down in his seat to prevent injury, one may presume that she assisted in getting him on the bus. Since she also seated him in the seat directly behind the driver, one could also presume she was aware of the fact that he was on the bus.

Well, apparently, she got off the bus early because she didn't want to be late to church. The driver, somehow didn't notice the 6' 2" kid seated directly behind him and parked the bus. The kid ended up spending the night locked in the bus, strapped to his seat until ten o'clock the next morning while the temperature dropped to 19º.

There's a discussion in the Talmud about what you should do if you're in the middle of planting a tree and someone tells you the Messiah has arrived. The answer, they said, was that you should finish planting the tree before running off to find out if it was true. I'm pretty sure it's better to do your job and get the kids safely off the bus even if you might be late to church.

Linda was arrested last night on a charge of reckless endangerment. Dumbass.
Posted by Nathan at 1:01 PM

A similar point in the Christian Bible in Mark. I'll second the "dumbass."

Begs the question - how did you find a bus that sign on it so fast? Or is that just another example of the UCF just 'making' things happen.

Bus matrons are supposed to hang that sign in the front and back window...after they check the bus.

Really. Not here. Our drivers are simply required to stay sober. Not much else.

Christ on a crutch.

Seriously? This is the society in which we live?

I'll bet Mrs. Hockaday is all concerned about our valyooes and thinks Sarah Palin is the cat's pajamas. Because, really, caring for the disabled isn't really a valyooe.

And Keith? That Unifier of Chicken Friendliness vow of secrecy applies to you, too, you know.

Don't make me come up there.