Ye Can Take Our Lives, But Ye Canna Take Our Trousers!

As previously mentioned, all of our carefully constructed layers of anonymity have been peeled away and the UCF has been PUBLICALLY REVEALED to be a nefarious SUPER-SECRET GUVMENT FUNDED something or other bent on doing...something. How were we caught out? Maybe it was the plethora of blogs flying the UCF logo. Could it have been the constant commenting back and forth on each others blogs OPENLY DISPLAYING LINKS BACK TO OURSELVES? Maybe it was the list of links in most of our sidebars. I don't know. The whistleblower who has outed us is just too damned clever for the likes of me.

How did I think I could head up an INTERNATIONAL CABAL bent on...something...and not be caught out; hoist on my own petard? Did I really think I could found an organization whose very agenda was to destroy people I had never heard of at the time? Oh, foolish leader. Waily, waily, waily.

I thought I had been so clever; covered every track. But that dude who caught us out is way too smart for me. I humbly bow to his utter, unmistakeable superiority to little old me. I am done in. Waily, waily, waily.

I was, however, curious about the massive intellect who could possibly discover the evil truths I thought we had so brilliantly concealed. It took a great deal of searching to find him. The effort will surely afflict me with Carpal Tunnel Syndrome. But after a great deal of industrious searching, I may, I repeat may have uncovered the damned dogooder who has unmasked us for the evildoers we are. Allow me to present the snitch who has foiled all of our evil plans: 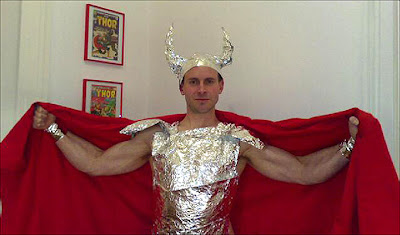 Disclaimer: This is mere parody. As the particular whistleblower is known to cavort with people of a litigious nature, I will state here unequivocally that the above pictured super-hero is not our whistleblower. He is, in fact Torvald Alexander whose exploits are fairly amusing in thier own right and who would surely have an ironclad case against me for, in any way accusing him of being that other guy.
Posted by Nathan at 3:08 PM

But I thought we were supposed to wear the tin-foil hats?

Apparently I needed to say that twice. Sorry.

Not foil! Not foil!

You all are making me CRAZY! You must be brainwashed, since no one can remember that FOIL MAGNIFIES brain waves!

TEAK!
You are supposed to be wearing your teak admiral hat.
Sheeesh!
It's a wonder we get anything done!

C'mon guys. It's not supposed to be me wearing the hat!

Besides that, foil chafes. Blech.

OK, that was totally not fair to us poor single guys. And I assume you weren't talking about this.

Uh, thanks, Vince, for that lovely link... I think.

And the fellow in that photo is much too muscular to sub in for our friend. Nice try though.

Vince, as noted in the article, the problem with that product is it would make mammograms... er... difficult I'd think.

As nice as the idea may be, it seems to me that the risk of an undetected lump or tumor would carry a greater risk that the convenience of not needing full time support.

And to be honest, I'm not sure one still wouldn't need a bra, after all, those of who prefer full support can affirm that a bra supports not just underneath, but all around.

And of course no woman should exercise without a bra.

And I'm sure there's a titanium codpiece somewhere.

seriously man all i did was stop listening to the music.