Chutzpah, Thy Name Is Hiram.

Ladies and Gentlemen, meet Hiram Monserrate.  Until recently, he was in the NYS Senate representing a portion of Queens, NY. (with update-y goodness). 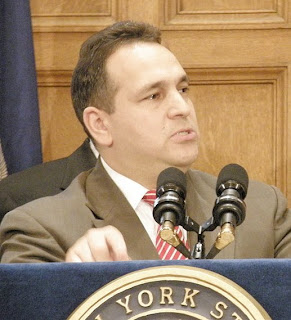 Let me just hit some of his high points -- (the "Il Duce look is just a bonus).

He was elected to the Senate in 2008.  Last June, he joined follow Democrat, Pedro Espada in a coalition with Senate Republicans in a power grab that temporarily forced a legal battle because the NY Senate had one Democrat named Majority Leader and one Republican...name Majority Leader.  (The fact that our Lt. Governor was busy trying to be Governor meant he wasn't available to break the deadlock.)  Monserrate switched back to the Democrats the next month.


While all of this was going on, he was facing a second-degree assault charge in which his girlfriend, had gotten her face slashed.  She had originally reported that he had slashed her with a broken glass and then recanted and stopped cooperating with police and the D.A.

In October of last year, he was acquitted of the second-degree assault felony count, but convicted on a third-degree assault misdemeanor count.  He has since, been sentenced to three years probation, 250 hours community service and a $1,000 fine. (Part of the evidence against him was the security video from his building showing him dragging his girlfriend through the lobby while she tried to get away.)

The misdemeanor conviction didn't automatically remove him from office, but the Senate voted by an overwhelming majority to expel him.

He immediately announced that he would run for the same seat again in the Special Election to fill his seat.  During the course of the election, he appropriated both Obama's Slogan, "Yes we can", and an absurdly similar logo. 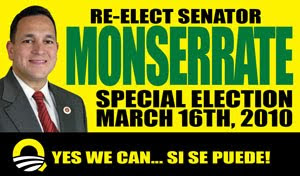 The special election is taking place today.  There are reports of him campaigning at polling places, saying that the vans with his signs on the side and the loudspeakers on the roofs have nothing to do with him.  When he was confronted by a poll worker, he said,  “Buzz off, man. Buzz off. Go shave, get a haircut and get lost. Who are you to tell me who I can and can’t talk to?”

Don't think this is a no-brainer of an election, though.  His supporters are furious that he was expelled because, "that beating didn't have nothin' to do with what kinda Senator he is"!  I forget who it was, but someone prominent with the State Democratic Party said that if he's elected, they won't seek to oust him again; "if they want him that bad, they can have him".

The same Democratic Party is supporting Jose Peralta for the seat.  He currently represents the same District in the State Assembly.  Peralta landed more than $500,000 in taxpayer money for a nonprofit that has never filed federal tax records, has no employees and has been inactive for more than two years. Until recently, they had offices in the same building as Peralta's District Office.  The building is owned by a dentist...where Peralta's mother works as the office manager.

I'm glad I live in Brooklyn.

Update:  So, with an unusually heavy turnout, Peralta took 67% of the vote to Monserrate's 26%.  I neglected to mention there was a Republican in the race.  I don't know his name, but he scored 7%.

At one point yesterday, there was a report saying that workers for Peralta were handing out leaflets that said, "Jose Peralta -- Not a wife beater!"  And in the same vein, there's a NY Times report this morning that reads, "Outside a polling station at Public School 127 in East Elmhurst, a supporter of Mr. Peralta taunted a Monserrate supporter, calling Mr. Monserrate a “wife beater.” The supporter fired back, “It wasn’t his wife.”

I can believe he lost with support like that!
Posted by Nathan at 9:22 PM

I don't recall ever recommending where you should live.