For a while now, I've been meaning to do a post about scheduling movie shoots.  This won't be that post.  Not quite.

Scheduling a movie shoot is an exercise in futility.  There are a million elements that come into play and you need to keep track of them all.  How many pages will you shoot each day? Will there be enough daylight for the scenes you're scheduling.  Once you create a schedule will the actors, props, locations, equipment and myriad other elements be available on the days you've scheduled for each scene.  Will the Teamster driving the Director remember to put gas in the car so he arrives on time.

I tell you...just thinking about it is exhausting.

A while back, I was Googling the subject and I was surprised to find how little there is on the internet about the art/science of scheduling a movie shoot. And some of it is utterly useless unless you're a rocket scientist.  Don't believe me?  Look at this: 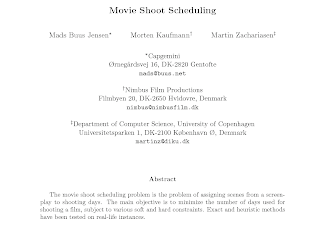 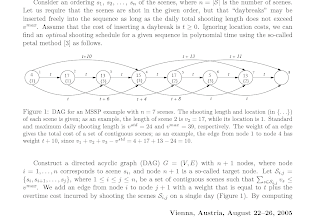 I know that some of my readers can probably make sense of that, (DORKS), but I'm not one of them.
Let's start at the beginning.  If you have a Steven Spielberg sized budget, you get to shoot as many days as you want to, so you might schedule yourself to shoot, oh....two pages per day.  If you're like most of the movie making world, you might schedule 5 pages per day.  If you're financing your movie with a bake sale your mother is having, you'll be shooting 12 pages per day.
So, now, you know how many pages you need to cram into each shooting day.  It's time to break down your script.  The movie-making world divides scripts into eighths of pages...because the text on a script page occupies about 8 inches of vertical space.  They even do this in the metric-speaking world as far as I know.  And we always talk in 1/8ths of pages.  A scene might be 2-4/8th pages long.  It will never get translated into 2-1/2 pages.  It just isn't done.
And 1/8th of a page is the smallest unit you're allowed to divide things into.

Now you'd think this would simplify things...and to an extent, it does.  Hell, how long can it take to shoot Johnny entering the courthouse? (I'm leaving out the fact that the script probably specifies that there are 30 NEWS CREWS, 50 PROTESTERS, 20 COURT SECURITY, 10 MOUNTED POLICEMEN in the background for the scene.  And that the scene takes place in 1920, so they're all in period costume.  And the News Crews are all using quaintly archaic cameras with the flash powder going off.  And you get the idea.  This might not take all that long to shoot, but it's going to take for-fucking-ever to get ready to shoot.

But anyway, let's just accept, for a moment that shooting an 1/8th of a page shouldn't really take all that long.  Really?  You're going to just accept that?  You silly, naive person, you.

How about this 1/8th page scene from Gone With The Wind?

How long do you think that sucker is gonna take you to shoot?  A week maybe?  Hah!

And while we're on the subject, there's another thing that screenwriters love to do.  They love to saddle you with the impossible.  They'll write that scene where their two protagonists argue for two pages with really snappy dialog and then they look into each others' eyes and realize that they're only fighting because they're totally in love with each other and their gaze lingers (ten seconds of screentime / two hours of shooting time while they try to stop giggling long enough to get one good take), and then THEY KISS!  And, of course, since the scene is so romantic and it's such a pivotal moment in the movie, the writer will specify that the scene takes place at magic hour.  It'll be fucking GORGEOUS!  The audience will sob and cheer and...and...and...  The poor schmuck trying to schedule the movie will try to figure out how to shoot a scene that takes up 12 minutes of screentime and 5 hours of shooting time during magic hour...which lasts about 15 minutes in 90% of the world's latitudes!


Anyway, this should give you just a hint of what we're up against when we try to schedule a shoot.  The cards are stacked against us before we even start.  And similarly, there are so many variables that trying to explain how to schedule a movie becomes a daunting task.  And it takes a lot of time to distill all of that information.  Which is why I've been threatening to write a post about how to schedule a movie for about a year now and I just haven't gotten around to it yet.

And now, I've gotta hit the "Publish" button, or time will run out on the Time Carnival before I even get this inadequate post posted.  I swear, I'll get around to it someday.  Time flies when you're agonizing over a page that's desperately in need of more editing.
Posted by Nathan at 10:39 AM

What an *awesome* post! I'm a screenwriting enthusiast (don't write, but love the science of it) but have seen very little about the shooting of a screenplay, so this information was fabulous. And, you've made me realize it may not be as stressful as I thought to be a writer!

Thanks for being part of L.A.'s carnival!

Glad you liked it Pamela. That really just starts to scratch the surface...which is why I've only been thinking about writing the authoritative post on scheduling.

Eh. I'll get around to it eventually.

Nathan,
I've never once thought about the scheduling guy, either. A thankless, unglamorous job most days I imagine. I really enjoyed your piece. Keep in touch! :)

OY! And I thought production schedules were hectic( from what I've studied, anyway )! Just now getting round to all the "tents" for this carnival( in between all the daily scheduling )...but you point out the unknowing ( as far as the fridge conking out )...some things you just can't prepare for, right?

This was illuminating and well-written. I am yet another schmuck who never stops to think about the behind-the-scenes work...thanks for shining a little light in that direction.

"I've been threatening to write a post about how to schedule a movie for about a year now and I just haven't gotten around to it yet."

Damn, of course not. You've got a lot to do with all those 1/8th pages! A great summary of the challenges in any event.

Great post, Nathan! The whole 1/8 page thing - wow! One of my first jobs was as an assistant to a VP of Production, and I read a lot of scripts for him, never once thinking about this very important and time consuming aspect of film making. This post was great fun to read - I feel so much smarter now. :)

Despite the insanity, it sounds like you love what you do. Best of luck!