Warning To Herbivores: AVERT YOUR EYES!

If you follow me on FaceBook, you probably saw this yesterday.  (If you don't...what the hell is wrong with you anyway?) 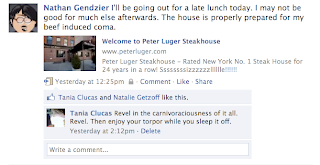 Now you may not think a visit to Peter Luger is worthy of a FaceBook update, much less a blog post, but then you'd have revealed that you've never been to Peter Luger and you shouldn't be trusted to decide where to go for meals.  I'm not saying you should always go to Peter Luger for meals; I only manage to get there once every two or three years myself.  But you should be acquainted with the place so that all other meals can be compared to the last meal you had at Peter Luger. Then, you can say things like "Non, theese quartier-pounder avec chez does not really compare well to my last repast at Peter Luger."  (The snotty French accent is optional.)

I once sprung for round-trip airfare for two from Cincinnati to NY, just for the sake of having dinner at Peter Luger.  Yeah, we did other stuff too -- you can't just sit there eating for 54 hours straight -- but the purpose of the visit was dinner at Peter Luger.  Everything else amounted to we may as well do some other stuff as long as we're here.
Look at almost any Top Ten List of America's Best Steakhouses and you'll find Peter Luger on it. Personally, I always feel like they're stretching things just to fill out the last 5 or 6 places on the list, but, what the hell, who ever heard of a Top Four List.

Anyway, yesterday's lunch was a leftover birthday gift from Anon GF.  We had tried to go a couple of times already, but we kept getting stymied by things like blizzards.  I'll also let you know that, in some ways, lunch is more pleasurable than dinner there, but that's mostly due to my lowly status.  First of all, if you call today for a dinner reservation, they'll probably ask you if 8:30pm on May 3rd would work for you.  (You'll note that they only accept cash - and now debit cards - and their own charge card.  I think having their charge card may establish enough cachet to get you a reservation; I don't know.)  Anyway, the lunch crowd is much calmer and you can get a table and it's the same food -- just don't count on getting anything done after lunch.

I'll start with Peter Luger's Steak Sauce.  The stuff is absolutely delicious.  But only a neanderthal would put it on the steak.  I've never seen anyone put the stuff on the steak. 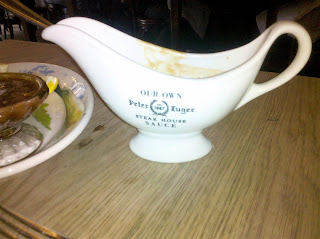 You put the Steak Sauce on the Tomato and Onion salad.  That's what you do. (Note: all photos taken with my cell phone so, if they suck -- sorry. Any comparison to washed-out faded picture menus at the Chinese TakeOut counter are purely the fault of the camera and photographer -- not the food.) 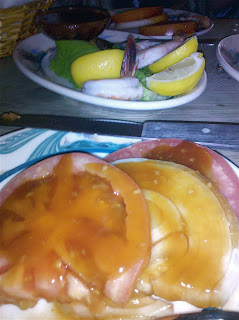 And with your Tomato and Onion salad, feel free to have some really fresh, delicious, HUGE shrimp cocktail.  I'm mildly surprised that there isn't a live shrimp tank where you can pick your own live ones.  They're that fresh. 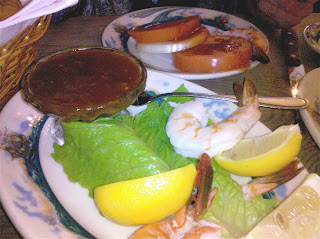 But let's move on to the meat.  What kind of steak would you like?  They do Porterhouse.  What's that you say?  Pay attention!  THEY DO PORTERHOUSE.  You can order a couple of other things (like a double lamb chop), but why.  You order "Steak for Two" or "Steak for Three" or "Steak for Four".  And they bring it to the table on a sizzling platter and they try to move their hands out of the way fast enough so that they don't lose a finger. (Actually, they dish up the first servings of everything and then they run.)
This is what "Steak for Two" looks like after you've had a couple of pieces.  I ordered medium-rare.  (The little pink cow says "medium rare" on the side -- isn't that cute? When I first started going to Peter Luger, I could eat "Steak for Two" all by myself and barely break a sweat, but alas, my metabolism has slowed a bit over the years.  We actually had to take a doggy-bag home.  I was slightly ashamed (but not enough to leave any of it behind). 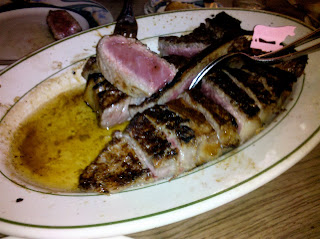 Since it was lunchtime, we went with the homemade onion rings for a side dish.  There's also a to-die-for creamed spinach, German Block Potatoes, and a few other choices for sides.  They're all excellent.
As the waiter was clearing away lunch, I updated FaceBook from my phone again.

Over coffee and dessert, I had a GENIUS idea.  You know those Pedi-cabs they have for tourists?  The ones where anyone sitting in one automatically looks like an utter dick? 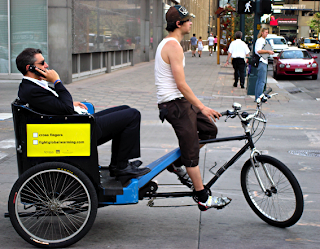 It's not just that someone wants a ride somewhere -- it's that they have no shame whatsoever about essentially carrying a sign that says, "Take me back to the office you peon, you".  (Sorta like Mel Brooks hollering for the Piss-Boy.)  But, on the other hand, as the meal wound down, I realized that I would have liked, somehow, for Anon GF and I to be magically transported to bed right. that. minute.
Maybe a bed like this: 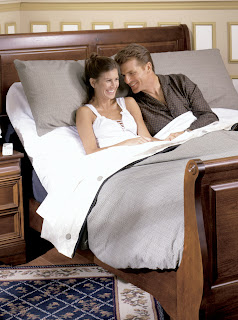 And then I started thinking, if there were a guy out front with a bed like that on wheels and a bicycle to push us home, I'D TOTALLY PAY THE SHIT OUT OF HIM TO DO IT.  Now, the wheels on the bed would need to be bigger - Brooklyn streets can be a little uneven - and there should be canopy completely surrounding the bed.  This is not about having a scenic trip home, it's about sleeping until you get there.  I realize there are some bugs to be worked out of this idea (I'm not sure if you're allowed to pedal a bed across the Williamsburg Bridge), but this is essentially a winner of an idea.  Eating at Peter Luger ain't cheap -- a few more bucks to get home in decadent comfort would be a small price to pay.
So, who wants to partner up with me.  I can't imagine it would cost too much to bankroll this operation.  And we could hire Herbivores to do the pedaling.  They're always going on about how healthy their lifestyles are!
Posted by Nathan at 1:11 PM

I think I'm getting a meat coma just from reading that. Drool.

And I had real meat this week. With hand dipped onion rings. Just your's is yummier.

(I'm not sure if you're aloud to pedal a bed across the Williamsburg Bridge),

The word is "allowed."

I will now go elsewhere to do things that need to be done.

Personally I preferred Gage and Tollner's .

I was once on a jury in Brooklyn and went there every single day for lunch, heaven.

Gage & Tollner was, indeed, a treat. But they were actually more famous for seafood than steaks, so it's not really a comparison.

Well they styled themselves a Chop House. The last time I ate dinner there Edna Lewis was chef and that evening came out to say hello to the tables.

A restaurant where the waiters wore service marks on their sleeves. It was common to have a waiter with 25+ years on the job in the room.

vivent - Latin for they lived high.