There's a little mini brouhaha going on in NY right now.  Last weeks' SNL Weekend Update included an "interview" with Fred Armisen playing Gov. David Paterson.  When asked about his plans now that he's not going to run in the next election, he said, "Well I'm gonna do a farewell tour of upstate New York -- Hellholes like Plattsburgh and Peekskill."  He went on to say, "I'm going to give those rock eaters something to cheer about. Those freaks love me up there."

The Mayor of Plattsburgh seems to have taken the whole thing with a sense of humor and even costars in a video inviting the SNL cast to come visit and see such sights as their sewage treatment plant.  There's also a welcome package that includes some of their tastiest rocks.

The Mayor of Peekskill isn't taking it as well.  Here's Channel Seven's report about it. (I apologize for the commercial at the start.)

If I've got any problem with the joke, it's that they called Peekskill "Upstate".  Peekskill is less than 50 miles from NYC while Plattsburgh sits huddling up there in the northeast corner of the state...poised to defect to Vermont or Canada at a moment's notice. That's Upstate!

Anyway, this got me thinking about a burning question:  Why the hell do most states have their Capitals in such crappy places?

For the sake of fairness, let's start with New York. Our capital is up there in Albany.  When Albany first became the capital, travel being what it was, it would have taken you about two years to get there from New York City.  And we liked it that way.  Our forebears had no interest in speedy government taking place in New York State.  Also, Albany was something of a backwater and they figured it might keep our politicians out of trouble.  With the onset of air travel and on-line hookers, our politicians have figured out how to get into trouble no matter where we keep them.  Thankfully, in addition to situating our capital as far away as possible, they also had the foresight to come up with one of the most convoluted forms of State Government in the Union so speedy government continues to be stymied here. (I think they're still arguing over the state budget for 2004.)

Some states somehow ended up with their capitals in sensible places.  Massachusetts put theirs in Boston. Colorado's capital is Denver, strategically placed on the high ground to keep an eye on the rest of the state.  Georgia put their capital in Atlanta.  It's fairly central and it's not Macon.

In some other states, it really didn't matter where the capital ended up.  Hawaii, for example has its capital in Honolulu.  Big Whoop!  No matter where you are in Hawaii, YOU'RE IN HAWAII. There's a tradition there of waking up every morning, facing east toward the Continental U.S. and giggling while chanting, "I'm in Hawaii and you're not!"  Louisiana basically flipped a coin to choose between New Orleans and Baton Rouge.  They didn't especially care which place won, but when Baton Rouge got the nod, the prevailing attitude was, "Hey, maybe they'll show up sober a few days every week."  North Dakota went with Bismark.  It's North Friggin Dakota; could it possibly make any difference?

Tallahassee has to be one of the crapiest places in Florida...yet it's the capital.  There were two thoughts that went into this choice.  1.) They weren't really sure that the rest of the state wasn't going to fall off at some point, and 2.) Tallahassee is perfectly situated to keep an eye on Georgia and Alabama...in case they try to steal any pine trees or sand.

Some state capitals are like popular girls forced to go to a nerdy school dance by their parents.  Juneau, Alaska, for one, hides in the furthest corner of the state possible, lest she risk being seen with anybody else in the state.

I don't understand California's choice of Sacramento at all!  They could have chosen Los Angeles or San Francisco if they'd wanted a truly cosmopolitan home base.  If they were trying to go the other way, why not Fresno or Bakersfield.  Or even Needles ferchrissakes!

And Michigan has me really scratching my head.  Let's face it...Michigan doesn't have a lot going for it right now.  Times are tough in Michigan.  But THEY'VE GOT A TOWN CALLED BAD AXE!  Now tell me, if you ever had to get into a bout of state one-upsmanship, wouldn't you want your capital to be in Bad Axe? 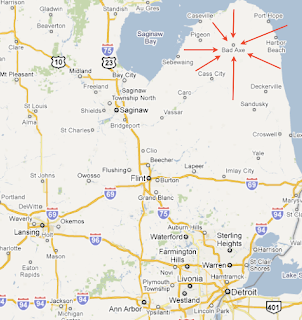 2.) Tallahassee is perfectly situated to keep an eye on Georgia and Alabama...in case they try to steal any pine trees or sand.

Actually, wrong on both counts. It's water. We're in the middle of a Federal lawsuit over who has rights to draw water from Lake Lanier and the Chattahoochee River, and how much they're allowed to draw. Water Wars.

See, short version is the 'Hooch runs from North Georgia, is dammed to form Lake Lanier, then heads through Alabama & Florida. When Lanier was built 30+ years ago by the Army Corp of Engineers, it was to provide water for the mostly rural area just northeast of Atlanta. Couple of small cities and the recreational areas the lake would develop.

Over time the area has boomed and everyone, and I do mean everyone, is now tapping into the lake. Including the burgeoning city of Atlanta. AL & FL have said for years not enough water was being released for their use downstream, plus there is the issue of several types of endangered mussels somewhere along the way.

Fast forward then to our 3 year drought. Every body of water in the state bottomed out to record low levels, including Lanier. The Corp kept water releases at the same level as in wet years...and GA screamed - we'll have no water for the cities...including Atlanta. So the Corp slowed down the releases for a bit, AL & FL screamed - we'll have no water! All 3 states imposed massive water use restrictions on everyone to try and save water.

Meanwhile, they went to Federal court and screamed some more. Outcome last year was the Court telling Atlanta that technically they have no claim to the water in the lake, they were not on the original charter. Only those few towns around the lake. Oops.

However, the Court gave the 3 states 3 years to work out a plan that would get approval from the Court. Or else the Court would make the decision for them and no one would be happy.

I'll keep you posted. But that's why Tallahassee in where it is.

The pedantic answer is that the capitals were placed where people thought growth was going to be a major factor in the 18th and 19th centuries.

Many, as Wendy pointed out, were placed where they were because they lay on major water routes - centers of transportation as well as drinking water.

Then the railroads came, and everyone took off for greener pastures.

Their crappy placement today is a monument to the folly of central planning.

"Their crappy placement today is a monument to the folly of central planning."

Leave it to John to blame crappy Capital placement on Communism!

We have Trenton as our capitol in NJ. No one wants to go to Trenton.

I've actually shot in your capital building once. (With Lesley-Anne Down playing a District Attorney.)