A Review And A Half.

One of the things I'm still getting used to about having my nook™ is how I shop for books. I'll only search for stuff with the nook if I know what I'm looking for and just want to see if it's available as an ebook.  Otherwise, I search on my computer which, at least gives me color pictures and let's me go through options a lot quicker.

As a result, I've just finished one book and started another that I'm not sure I would have picked up in a bookstore.  I can't say this is upsetting to me. 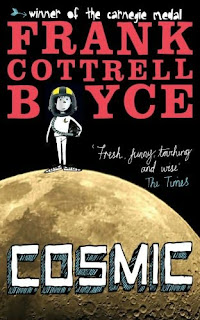 I honestly don't know what made me decide to read this one, but I'm glad I did.  First off, I'll admit I'd never heard of Frank Cottrell Boyce, which says more about me than it does about him.  He's not exactly an unknown, just previously unknown to me.

Cosmic is a story about Liam, a 12-year-old kid ("I'm nearly Thirteen!"), who goes through a sudden growth spurt one summer.  It's not just the 7 inches he's shot up in three months, there's also the matter of some new "stubbly bits" on his chin.  Suddenly he finds himself mistaken for an adult on a regular basis.  He's assumed to be the new teacher when he reports to his new school.  He has to carry his passport to qualify for child's fare on the bus.  Even the adults who know he's only 12 expect adult behavior from him because of his appearance.  It's all terribly unfair and confusing.

It also presents him with some opportunities, so it's not all bad...but secretly, he's relieved when his father shows up before he gets to actually test drive that Porsche.

Everything leads up to a Chinese entrepeneur's secret launch of an orbital rocket with a crew of children...chaperoned by one adult...Liam.  And things don't exactly go right.

Technically, this is a children's (or YA?) book.  Personally, I think they need to come up with another classification for stories like this.  It's a wonderful book and there's nothing particularly childish about it, other than Boyce's ear for the 'tween voice.  The only thing that makes it a children's book is that it doesn't have anything in it that any parent would object to having their child read.  I think there's a difference.

Another thing I learned about the nook is that you can treat it like your personal library.  If I went searching through my piles of books, I could locate my complete works of Mark Twain.  Instead, I just had nook find me a free copy of A Connecticut Yankee in King Arthur's Court.  I haven't read this one since I was about 15...and I couldn't be more surprised by how different it is on a second reading.  If Twain wasn't 100 years dead, I'd swear he'd taken another whack at the thing since I first read it.

I'm about 1/3 of the way through the book and I'm finding it surprisingly wonderful, frustrating, and incomprehensible by turns.

I'll start with the frustrating and incomprehensible.  Some of this is inevitable.  My Twenty-First century ear has occasional difficulty with his Nineteenth-Century vernacular and when he has characters speaking in Sixth-Century English....Arghhhhh!  Not all the time; sometimes I get the joke and it's really quite good, other times I find myself rushing through a passage because I haven't got a clue what the hell anyone's saying. (In fairness, I've seen Kenneth Brannaugh's Henry V three or four times, and I still haven't got a clue what anyone is saying during the first half-hour or so; my ear needs time to adjust.)

Twain also seems to have used the story as a not-even-thinly-veiled attack on Monarchy and Established Churches.  His attack on the Church, which he repeatedly explains is a complaint about a church established as a state religion still comes off  more than a bit screechy.  Also, I can't help thinking that contemporary attitudes made it much more acceptable for him to be so blatant in his Catholic bashing.  In truth, I have no problem with the substance of his accusations against Church and Monarchy, but, holy crap, he does go on and on about it. (There is an excellent passage where he points out that The Reign of Terror, really was approximately a year of horrific excess, but begs the reader to compare it fairly to the centuries of horror that precipitated it.  Twain makes a wonderful case against hereditary privilege and of its mindless acceptance.)

And the wonderful?  Monty Python could have performed parts of this book without changing a word.  When Twain is on, he's on and I find myself laughing out loud on a regular basis.  Twain's work really does age well.

Anyway, I doubt I'd have picked either of these books up if it hadn't been for the fact that I'm adjusting to a new way of looking for what to read next on my nook.  Hopefully, I'll continue to have unexpected gems dropping into my lap.
Posted by Nathan at 10:00 PM

I love the name "Liam," and I'm going to buy that book TONIGHT.

I need a book that will make me feel good.

This one should work.