They Shoot Horses, Don't They?

Blogs all over the internet are experiencing Grand Mal Seizures over some proposed legislation in Florida relating to their Film Tax Incentives Program.  The short story is that Florida currently offers a 2% tax incentive to filmmakers to shoot in their state and they're considering adding an additional 3% incentive for films that are "family friendly".  The internet has latched onto this story and focused on the viewpoint that it's nothing but discrimination against Gays.  I'm going to let The Wonk Room on Think Progress give you that angle.  Personally, I think they're getting all "Help, Help, I'm being repressed", over nothing.

I'm not about to try to say that the legislation isn't anti-Gay in motivation, but it's a lot more far reaching than that.  So, far reaching, in fact, that they've shinnied out to the end of the limb so they can pick an apple from a tree that's 20 feet away.

The relevant portion of the legislation reads:

A certified production determined by the Commissioner of Film and Entertainment, with the advice of the Florida Film and Entertainment Advisory Council, to be family-friendly…Family-friendly productions are those that have cross-generational appeal; would be considered suitable for viewing by children age 5 or older…and do not exhibit or imply any act of smoking, sex, nudity, nontraditional family values, gratuitous violence, or vulgar or profane language. Under the current incentive program, review of the final release version is not required and nontraditional family values, gratuitous violence, and implied acts do not exclude a film from receiving this additional credit.

As you'll see from this 2008 map of states with tax incentives, they take a huge variety of shapes, sizes and actual impact, but they're ubiquitious. 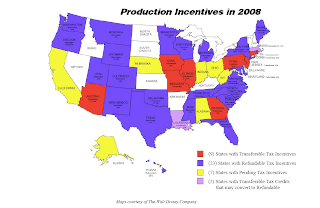 Because these tax incentives take so many forms, I'm not going to go into a whole lot of detail on them other than to say:
1.) They work.  New York, for example commissioned a study before renewing its program and found that, in addition to jobs created,  every dollar refunded, resulted in $1.90 of tax revenue.  This is what's called a No-Brainer.
2.) I'm not aware of any other state that includes script approval as part of the criteria for qualifying for their incentives. It's a straight money deal that says, "If you spend money here, and hire people here, we'll make it worth your while".  No other state is trying to position itself as a producing partner.

And that's where the rub comes in and why railing against Florida's proposed legislation is a ridiculous waste of time.  With very few exceptions, nobody is going to apply for the damned thing.  Look at this part of the language again -- "and do not exhibit or imply any act of smoking, sex, nudity, nontraditional family values, gratuitous violence, or vulgar or profane language."  C'mon, how many movies are going to fall all over themselves trying to shoot in Florida with that kind of restriction.  And speaking of "nontraditional family values", does that include blended families with two previously divorced parents and children from the previous marriages?  How about single mothers or fathers?  Can it be a set of in-laws raising children because the kids' parents are always away having mysterious adventures in international espionage?

This language is gong to attract essentially nobody.  Furthermore, say you're producing a movie that calls for a beach town as its setting, something Florida has in abundance.  Well, the movie only needs one beach town in which to base the production and there are incentives lining the entire Gulf Coast and ranging up the Eastern Seaboard.  If I'm producing that movie, I'm sending my scouts anywhere but Florida.

See, this isn't about discrimination (of any sort), or censorship or oppressing anybody.  It's about the economy of making movies and the guys counting money who couldn't give a rats ass about artistic integrity or social activism are going to be the ones driving the bus.

Or maybe you do want to talk about artistic integrity.  Fine!  Not to be cynical, but even at the directorial level, that barely enters into the discussion.  Why?  Because directors set the bar a whole lot lower when it comes to having anyone tell them what can and can't be in their movies.  Directors fixate on every little detail.  I've seen directors dig in their heels about something as petty as what color a room should be painted or what food should be on the table at a dinner party scene.  Do you think there's a chance in hell a director is going to volunteer to have some state bureaucrat helping with dialog...with character motivation...with storyline?  Get real.

I'll repeat, I'm not trying to say that there's no Anti-Gay motivation behind this legislation.  Knowing Florida, I'm pretty sure that is a motivating factor.  But what I am saying is, why go to the effort to get all hot and bothered about such a self-defeating, half-baked bit of lunacy?

If they pass this legislation it isn't going to prevent one single movie from being made...it'll only prevent Florida from reaping any of the associated riches. Or, to put it another way,  come shoot all your pervy, smoke filled, gore spattered, motherfucking foul-languaged movies here in New York.

If Florida thinks its such a great idea to shoot its own horse in the starting gate, who am I to advise them any different.
Posted by Nathan at 10:27 AM