They Say The Neon Lights Are Bright On Broadway.

Last week, I ran across this photo on Lost City.  Even though I didn't move to NY until 1986, this particular block looked pretty much the same then as in the picture taken in 1978. 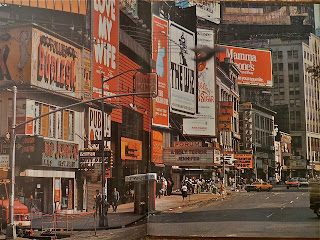 The shot shows the Northwest corner of Broadway and 46th Street, looking north up Broadway.  And there, mocking me in the left side of the frame is the Howard Johnson's Restaurant that sat there from 1959 until 2005.  Not that I have anything against Howard Johnson -- you may recall that at the age of 9, I championed Howard Johnson over their evil competitor, Holiday Inn.
Let's just step into the WABAC machine, shall we?  It was probably 1987 and I was on some job (can't remember which one), and I was assigned to prep Times Square for a night shoot.  On the one hand, this was kind of an easy assignment.  Let's face it, Times Square is what it is.  There's not that much you can or would want to do with it.  On the other hand,  all of those neon signs were on timers and would start turning off between midnight and 1:00A.M.  If you're planning to shoot all night, you don't want your location going dark in the middle of the shoot.
If you want to keep all of the lights lit up in Times Square now, you have to contact 20-30 individual building owners and advertisers -- they all control their own signs (called Spectaculars).  In those days, there were two billboard companies who built and maintained all of the signs,  Artkraft Strauss, and Van Wagner.   And I figured, how hard can this be?  I'll call two companies and find out how much it costs to have all of the timers reset and Bob's your uncle! And, at first, it pretty much worked out that way. During one of these conversations, I was informed that the Howard Johnson controlled the signs on their building and another building that they owned on the opposite side of Times Square.  Since we'd be shooting right near 46th Street, these two building would be fairly prominent, so, I set out to secure Howard Johnson's cooperation. 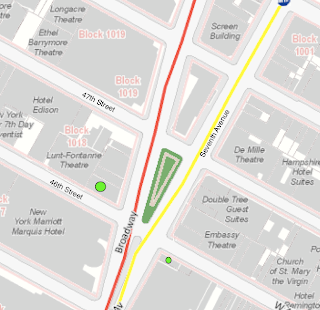 That green dot on the left is where the restaurant was and the one on the right was the other building they owned.  I'll digress for a moment to mention that I was warned  the owner, was somewhat eccentric.  I think the words "piece of work" were used.  It seems that different companies had been trying to buy up his properties for a while and that he had rebuffed some pretty spectacular offers. And it wasn't just that he was turning down offers at multiples of the actual property values -- he had a reputation for deciding, at first sight, what he thought of any company's representative and then dealing with them accordingly.  I was led to understand that it wasn't unheard of for him to get no further than hearing some guy introduce himself before saying, "This meeting is over!"  If he didn't like you, he just wasn't going to do business with you.
By way of illustration, look at these next two shots.  The building with the Mama Mia sign on it is the one he didn't want to sell on the east side of Times Square.  When Bertelsmann was planning to build their NY Headquarters, they attempted to buy the entire block.  Howard Johnson held out.  Eventually, Bertelsmann adjusted their design to leave the little building on the corner.  It's still there. 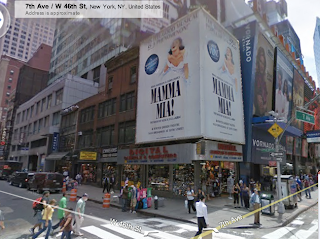 Bertelsmann is the tower you see taking up the rest of the block. 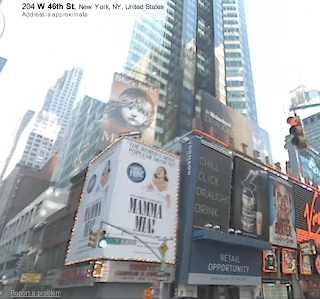 Anyway, I looked up the phone number and tried calling a few times.  Each time I called, trying to find that time of day when there would A.) be a responsible adult in residence, and B.) a time when they weren't being slammed with customers, I'd get, "Call back later.  Very busy." CLICK.  After two days of this, trying early morning, middle of the afternoon between lunch and dinner, late at night, I decided I'd better show up in person.
I walked into the restaurant, which I've got to say was wonderful in its own right.  The decor looked like it hadn't changed since the day they opened with a really cool cocktail bar in the back, orange vinyl booths and chandeliers.  The staff also looked like they'd been there since opening day.  I managed to get one guy's attention long enough for him to point outside and say, "Around back.  Upstairs!"  I took this to mean there was an office upstairs and that I should go bother them.
By this time, I was a nervous wreck.  I was a total newbie.  So far, my contact with Howard Johnson had consisted of a few really brusk brush offs.  Now, I was being sent upstairs, presumably to talk to the guy who I'd been warned made all of his decisions based on first impressions.  And standing there on the street, I was fully realizing how badly I'd be fucking up the scene if I couldn't get these two buildings to stay lit up.
I went upstairs.  I can't remember if they were on the second or third floor, but I remember going up a dusty narrow stairway and emerging into a big room with maybe 10  or 12 desks sort of randomly strewn about.  There was no receptionist.  I stood in the doorway for a couple of seconds while nobody acknowledged my presence.  Suddenly, from the opposite corner of the room, somebody hollered, "Waddayouwant?"
Nobody else in the room looked up and the Hollerer didn't make any sort of gesture indicating that I should approach him, so I hollered back from the doorway over everyone else's heads.  After telling him as briefly as possible what I wanted, he picked up his phone, dialed a number and then hollered into the phone (as if he was still talking to me across the room), "Keep all the lights on next Thursday"!

He never looked at me again and didn't say anything else, so eventually, I just slunk back down the stairs, not really sure if I'd succeeded or not.

Happily, the lights all stayed on for our shoot.  I guess the guy liked me.