It's Madness, I say. Sheer Madness.

I mentioned a few days ago that we'll be doing our Tech Scouts on Monday and Tuesday. Tech Scouts have always been a real production and they've grown worse. The Tech Scout is where the Director will show every department head what we're doing at every location and then they get a chance to figure out what they need to do to make that happen. It's a traveling circus. Monday morning at 8:00am (tentatively), the following folks will get on a bus and we'll go look at lots of stuff for the next 12 or 13 hours:

The first thing I've got to do is create the itinerary for the scout. We're trying to cram in every location in two days. So, first, I'll put them in an order that makes sense geographically. Then I'll figure out what the travel times are from one to another. Then I'll decide how long they will need (or get) at each location. Oh, and then I've got to cram lunch in there somewhere. It's a union crew, so they have to break for lunch between 4 and 6 hours from the start of the day. Otherwise the producer pays them "meal penalties". I've got to end the day after 12 "working" hours. Meals are off the clock. And I also don't want to go more than 6 hours after the end of the first meal or we'll owe a second meal. Nobody wants to take the time to stop for that.

OK, so the itinerary is all set and it works and, D'oh! Two of the places you've so carefully scheduled aren't available when you wanted to go there. It's a big damned jigsaw puzzle and sometimes instead of fitting a piece in neatly, the answer is to chop off part of the puzzle piece and beat the crap out of it until it fit where you want it to go. Or maybe I'll just leave a hole there. Yeah, I think it looks fine like that.

That part of things is the same way it has always been, so I'm used to that. What's changed? Well, in the old days, (Get off my lawn ya little bastards), we just typed up the itinerary with the times and the order we'd see stuff, the name of the location, the name of the set in the script, and the scene numbers. The new wrinkle is that a few years ago, some over-achieving asshole started producing "Tech Scout Books". If I ever find out who that person is...well it won't be pretty, that's all I'm saying.

It'll be full of diagrams of every location, lists of every scene to be shot there, whether it's night or day, and plenty of room to take notes. It'll be printed two-sided so it reads like a normal book with relevant info opened up to face each other. There'll be blank pages so there's never any info page facing a page it's not related to.

Here's one of the diagrams I have to produce. 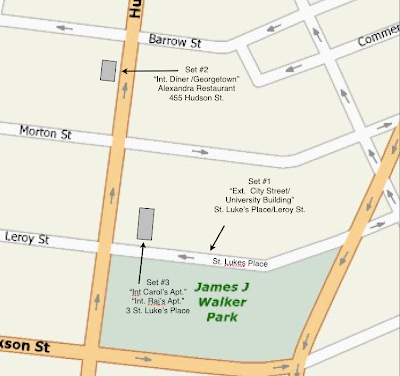 It shows three sets that will shoot on the same day. There's an exterior, then a Diner interior, then two different apartments shooting on two floors in one person's apartments. After this page showing the relative locations of each set, there will be a page for each of the interiors with drawings produced by the art department.

This day will get 8 pages in the book. 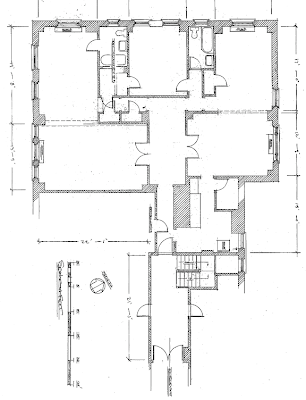 The beast will be about 100 pages by the time I'm done with it. I'll produce the master and then take it to kinkos and pray that they get 30 copies done and put into binders with dividers in time. (I only need 25 of them, but someone will leave it at home on the second day, so I need spares.) Each book will be helpfully personalized with the person's name. The spares say (RMFICRTBMSTW: Translation, "Ridicule me, for I can't remember to bring my stuff to work.)

I guess I'd better get back to work.

Oh, BTW, I know I've been talking in the first person here, but three of us will be involved with getting this done all day today. Hey, I'll take a picture when we're done.
Posted by Nathan at 7:36 AM

Hey Nathan,
I've been reading your blog when I can, found it through Amy's FIB site. I gotta tell you, this post gave me a headache just reading it! Makes me glad I'm just a boring office manager.

DeLurkers are always welcome Tracy...especially when delivering proper sympathy for my whining.

Your job makes me tired just reading about it. Hope it finally comes together and goes smoothly (although if it doesn't, think of the blog-fodder it will provide)

Oh..and Hi Tracy...nice to see some new faces around here...not that there is anything wrong with the old faces..but new blood is always good...er..you know what i mean :)

Nathan,
Even though it's been three (or 4) years since we workd together, I'm to see you're alive, well and (how can I put this?) ADHD. Great to find your blog.

I assure you, if things go into the shitter, the last thing I'll have time to do is blog about it.

Meet Mark! I met him 4 years ago while working on a brief show in Seattle. He is indeed a most excellent guy and I'm glad he found us.

Thanks for the welcome Nathan & Kimby, good to come out of lurker mode. We're always out there....(evil laugh)
Honestly Nathan, have you had your blood pressure checked lately? hmm, maybe you don't want to know.

All I have to do today is format 88 datasets into an Excel workbook containing 11 sheets, then figure out whether I want to make plots in Matlab or Sigmaplot...

I'd either sympathize or celebrate for you...if I had any idea what any of that is. :D

Hi mwt! Along w/ Nathan, I don't have a clue what you have to do, but I'm guessing you need sympathy, & lots of it. Do you feel it coming thru? Good luck.

wow that's a ton of work, have fun knocking that out.

MWT throws in stuff like that just because he knows I'm not capable of bending my head around it. MWT (and some others) likes to see me go through cranial contortions.

And while I suspect that Saqib does, in fact, know exactly what MWT is talking about, he'd pretend to know just to add to the pile-up.

I'm gonna go back to Jim's site and continue calling him names.

Nah, I've found that this place is perfect for any non sequitur things I might have to say at any given time, that are too short to turn into an actual blog post on my own blog. ;)

(With that said: everything below this line is going to be High Geek...)

Saqib: Matlab runs on a command line interface. Sigmaplot is all GUI. The reason I started using the latter was because it can make graphs with multiple x axes. Matlab 6.5 could not, and it also could only make YY plots if you tricked it. (Matlab 7.3 can make YY plots, but there are SOOOO many other things I dislike about its graphing abilities....)