A Hero For Our Age.

I don't hunt. I have nothing against people who do hunt, but it's just never appealed to me. The fact is that I love meat. I just prefer that it have its face removed and it should be broken down into its component pieces before the two of us are introduced. Look, I'm not particularly squeamish, but if I had my druthers (druthers

1895, jocular formation from Amer.Eng. dialectal form of I'd ruther,I'd rather), I'd go on believing that all my steaks originated on a little rectangle of styrofoam with an airtight plastic seal.

Having said that, there really is a special place in my heart for those who are willing to go out and stalk their food. The ingenuity that has elevated hunting from grubbing in the dirt, to sitting in an elevated living room with TV, beer, a barbecue, beer, a reclining lounger, beer, wifi, beer, indoor plumbing, beer and...oh, yeah, your gun, is what made America great. I once went to talk to a farmer about using his property in a movie. When I arrived, he and his family were skinning a deer. You may have visions of some guy kneeling next to a carcass, bloody knife in hand. But that's not how real Americans do it. No, in America, the dear is winched up onto a tree limb, and then a length of steel cable is attached to a golf ball, and all the work and energy are provided by backing up a 4-wheel drive jeep. This is inventiveness that I can respect!


Yes! I respect ingenuity. I celebrate people who take the mundane and use it in novel new ways to make all of our lives easier. I believe they should prosper from their brilliant imaginations. One such visionary is Marcel Fournier, of Concord, NH. For whatever lame reason, the state of Vermont, is happy to let Mr. Fournier shoot a buck, but not a doe. (I'm sure there is some reason, but I've driven down the Palisades Parkway any number of times, and I'm not aware of any deer shortage.)

Anyway, putting myself in Mr. Fournier's shoes, I imagine myself thinking, "I'm hungry. Does doe-meat taste any different from buck-meat? I think not." And the truth is that, in Mr. Fournier's shoes, I would have just felt sorry for myself when I couldn't find a buck. I would have gone home buck-less and meat-less. But not today's hero, Marcel Fournier. Not to be deterred, Mr. Fournier shot the first damned thing to come walking out of the woods and then attached a rack to its head with lag bolts. 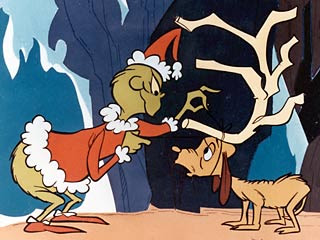 And you thought How the Grinch Stole Christmas was just meant to teach children about the spirit of Christmas. The lazy intellects among us watch Grinch and just see the surface message. Mr. Fournier saw dinner.

My goodness. Mr. Fournier really is dumber than a stump, isn't he?

Just remember what they all said about Mr. Fulton and his steamboats.

No, he really is dumb: if he'd been smart he'd have remembered it's not just the rack that defines a buck and so he also would have taken two balls, put them in a sock, grabbed a couple more bolts and....

Well, technically, he probably should have used screws...

And doe meat does taste different from buck meat, if the buck is in rut the meat can be damn near inedible.

So glad I can always count on you guys to find the faults in my logic. At some point in the future, I promise to set the bar a little higher and give you real sense of accomplishment.

Well, well, looks who's a little bitter ray of sunshine this morning, eh?

Actually it's all about game management on if you can kill a doe or a buck. Most hunting seasons are after the rut 1) because animals in rut are highly friggin' dangerous (especially if you're using sex lures) and 2) you don't want to kill all those baby mammas. Yeah, it's a nutball argument, but still it's there.

Anyway, here in Ohio it used to be you could only target bucks. We had to import deer back in the 60s to re-establish the population, so you didn't want to hunt them out too fast. Again. But not that deer are practically slopping all over the place, you are now supposed to kill more does than bucks. Go figure.

Mr. Fournier is only 19, so he has a looooong career of amusing us ahead of him.

Unfortunately, as my wife put it this morning, he's 19 going on Stupid.

Although, now that I think about it, most science vessels have a whole bunch of different winches for lifting extremely heavy equipment... hmmm.

His problem was he bragged about it to someone.