About ten years ago, I did the locations for a commercial being produced by a company from Miami. At some point during the prep, the producer and I got to talking and I mentioned that I had grown up in Jacksonville. She looked at me incredulously and said, "There's Jews in Jacksonville?" I explained that Jacksonville had a lot of Synagogues and that each and every one had a parking lot filled with rusty pickup trucks...many of them on cinder-blocks. (That's a big fat lie, but I think she bought it.)

The truth is that Jacksonville is one of those geographically schizophrenic places. Sure, it's Florida, but it could just as easily be Georgia or Alabama. Jews make up a little less than 2% of Jacksonville's population, but I never realized this as a kid because all of us lived (and I think still do), in just a few neighborhoods on the south side of town. As far as I knew, the town was just brimming with Jews.

So it always came as a surprise to me when I came into contact with some redneck who expected me to have horns, or told me quite sincerely that even though I killed his lord Jesus, his preacher told him he had to forgive me. (I never quite understood that one, but I was relieved, nonetheless, that I was going to make it to the end of the schoolbus ride with my skin intact.)

I met a kid once who was absolutely incensed when I wouldn't admit that I new some Jewish kid from Los Angeles. "C'mon! He's Jewish! You guys all know each other!" And don't even get me started on the neighbor's kids who taught my little brother and sister that "Genius makes it rain". 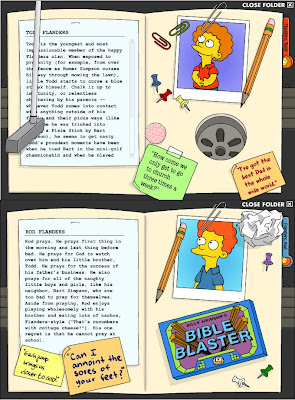 Anyway, I grew up in my mostly comfortable little bubble of traditional Jewish family life and rarely felt especially different. At least once a week, we went to one of the Grandparents' house for dinner where we had brisket or baked chicken with kishkes or kasha varnishkes or, God-forbid, one of the Jewish variants of smoked or pickled fish. My mother was no slouch either when it came to traditional meals.

[begin lousy segue]
So just imagine my sense of betrayal about 15 years ago when I called my mother and asked her for her Challah recipe. There was a moment of silence and then she said, "And just when is it that you remember me baking a challah? I don't bake challah; I buy challah from Worman's!" 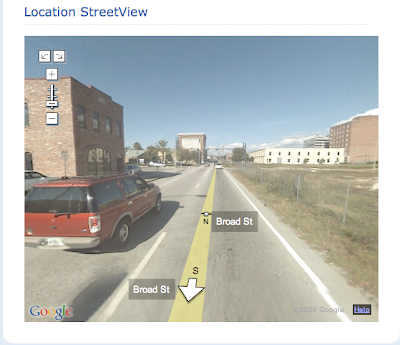 Disclaimer #2: That StreetView picture bears absolutely no resemblance to the Worman's I remember. I'm pretty sure somebody screwed up and just searched for the address of the original Worman's...a site that hasn't seen a Jew in 40 years or more.

So, my mother put my sister on the phone, who was no help whatsoever, ("Let's see...there's flour and water and a little bit of salt"). I was determined to figure out how to bake challah, and I started experimenting. I tried a few different recipes and each one was denser and more brick-like than its predecessor. The only thing that varied was the level of ugliness and disfigurement.

So, I'm pleased to announce that I've found a really good recipe and I'm such a nice guy, I'm going to share it with you. I had to monkey around with the ingredients, because the recipe I found must have been intended to feed a family of 45. Anyway, here's the final product. It's really good. [/lousy segue]

Note: Challah is meant to be Parve (neither meat nor dairy so it can be eaten with any meal). I know most of you don't keep kosher, but please do me a favor and stick with the spirit of the thing. Resist the urge to toss in any butter or lard or other such abominations! (My mother refused to have Bac-Os in the house regardless of the fact that they're kosher and don't contain anything that ever walked around on its own.)

1. In a mixing bowl, dissolve yeast in warm water. Let it stand until creamy (about 10 minutes).

2. Stir the oil, honey, eggs, salt and 3 cups of flour into the yeast mixture. Beat well. (I use the electric mixer with the attachment that has little rubber scrapers that reach the sides of the bowl.)

3. Stir in the rest of the flour, 1/2 cup at a time, mixing well after each addition. The dough is ready when it all pulls together and releases from the walls of the bowl. Dump it out onto a lightly floured surface and knead it a bit more. (This may not be strictly necessary since the mixer should have done all the work, but you can't make bread without getting cramps in your forearms -- it's a law!)

4. Lightly oil a large bowl; place the dough in the bowl and turn it 'til it's coated with oil. (I like olive oil for this part because I've convinced myself it adds a little bit of flavor.) Cover with a damp cloth and let it rise in a warm place until it's doubled in volume, about one hour. 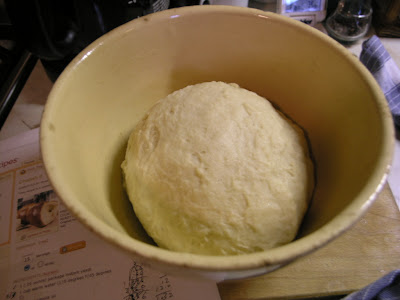 Look! There'd be another picture showing the dough completely filling the bowl if every shot of that hadn't been horribly out of focus.

[Beautiful picture of risen dough filling bowl]
5. Deflate the dough and dump it out again onto your lightly floured surface. Divide into 4 pieces. (OK, the focus here sucks too, but how could you imagine "divided into 4" without an illustration?) 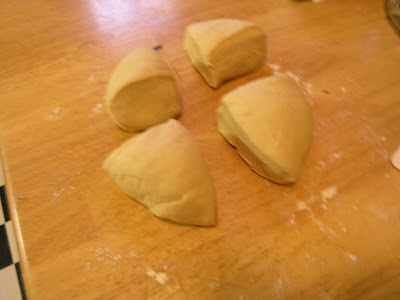 6. Roll the 4 pieces into ropes with your hands. (The dough is really elastic and this takes a bit of work.) 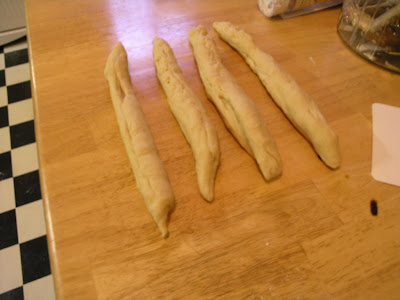 7. Braid the four pieces into a loaf and place it onto a lightly oiled baking sheet. (If the ends don't want to stick together, just tuck them under.) Cover it with a damp cloth and let it rise again until doubled in volume, about 40 minutes. Preheat the oven to 350 degrees F. 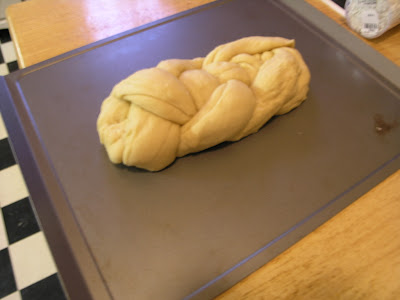 8. Combine the egg white and the one tablespoon of water, beat lightly and then brush it over the risen loaf. (There's a lot more egg wash than you'd expect. I brush on most of it before baking and then brush on the rest of it after about 15-20 minutes of baking.) 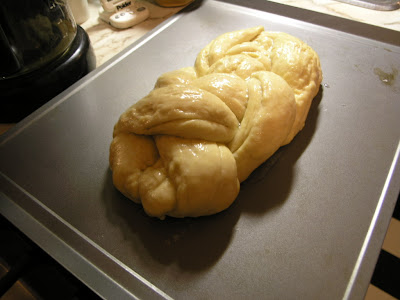 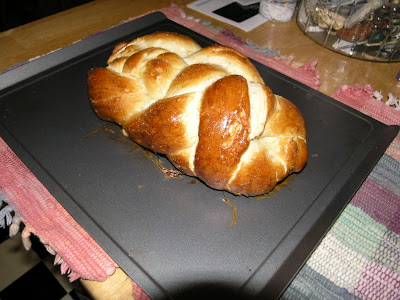 It should come out with a thin crunchy crust and a dense, soft, sweet inside. 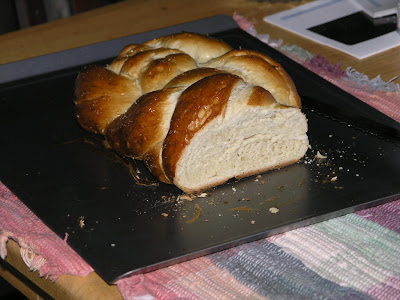 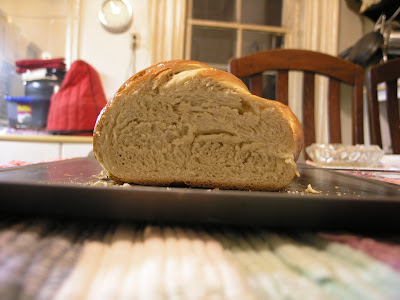 Slicing it is fine, but it's traditional to just rip off the first chunk with your hands and eat it Viking-Style.
Posted by Nathan at 8:13 AM

Viking style is the best style there is!

I never told you about my distant ancestor Valthjof Gund(z)erson?

The name got a little messed up at Ellis Island, but I'm pure Norse God, I am.

What is wrong with you people?

You can do whatever you like after you've baked it, just don't add butter to the ingredients.

To clarify, if you were keeping kosher, you'd also be free to put butter on the bread...just only when you're eating a dairy meal.

It really does look good. I intend to make one ... unless you ship?

Drool. Can I come over and get some?

Shall we have a bake-off?

1. Genius totally makes rain. Hell, he walks on the stuff.
2. Wow, you can bake.
3. Double wow, you are funny. Like milk-out-of-nose funny in your Facebook blog. However I am lactose intolerant (but I digress).
4. Where the fuck did you learn how to braid?

You get today's "Bravest in the Family" award. I see some of your sibs, lurking on occasion, but they only admit it in emails.

And braiding? Didn't you ever make a lanyard at day camp? I'm just embarrassed for you.

Listen, I was making FUN of your braiding technique, but now have to retract given receipt of my award.