Of Mountains and Mouseholes.

When you manage Locations for a living, jobs sometimes drop out of the sky at the last minute. That's O.K. Most of us have a standard hardwired response to most any question a Producer might ask us.

Sure. No problem. We can do that.

We also have the hardwired internal response that takes effect as soon as you hang up from the first phone conversation.

How the hell am I going to pull this off?

During the summer of 1999, I got one of those phone calls...only I didn't realize it at first. The conversation started out sounding like a really easy gig. The producer told me they needed to shoot some NYC footage for the movie, Stuart Little. We wouldn't have any of the actual cast here, but the Visual Effects Director needed to get some shots of a little animatronic Stuart Little driving a little radio-controlled car into the city.

"No problem. Do you know where you want to do the shots?"

The job starts to sound a little more complicated as he explains that they need shots in Times Square...and crossing the Brooklyn Bridge. My brief moment of silence prompts him to say, "Oh, don't worry. We're not talking about the actual roadway. We want to shoot on the pedestrian walkway."

"Ohhhh. That should be easy enough to set up. When do you want to shoot?"

"A week from tomorrow. Oh, and they're night shots." Bear in mind that if someone called me today with this kind of notice to shoot on the Brooklyn Bridge, I'd probably tell them that we didn't have time for the permits. Even in pre-9/11 days, and in spite of the fact that I had previous experience working with the people who would need to issue the permits, this was cutting it close.

Fine! I know what you're all thinking. It's a little 10" long car with a stuffed mouse driving it. You'll be running around with a half-dozen guys and a camera and some geek with the remote control box. How hard could that be? (All movie-biz-types reading this are now directed to stop pointing and giggling at the civilians.) The key phrase to be aware of is: night shots.

Here, let's take a ride on my thought train. First there was a little 10" car. Next, there's the realization that nobody bothers shooting in NY unless they want some expansive shots of the city. O.K., we're not going for a few shots with a frame that's a few feet wide. We're gonna get some shots with an awe-inspiring massive skyline. And it's at night. So it will need to be lit.

And it's on the Brooklyn Bridge.

Stuart Little's little car is...little. The Brooklyn Bridge is...the friggin' Brooklyn Bridge! After I jump on the opportunity to do the job, (we only turn down jobs when we're already booked or when they can't afford us), I hang up the phone and start to organize my thoughts so I can start making calls and sending out letters to set this whole thing up. Now, I don't make my living as a lighting guy, but I've been around long enough to know that this thing is going to be huge. About 12 nano-seconds of thought bring me to the realization that lighting-wise, shooting a little car driving across the bridge won't be very different from shooting the NY Jets vs. the MN Vikings...and then the Radio City Rockettes enter from stage left. There's only so much foreground; there's only so much background; there's only so much skyline. There's a lot of all of that stuff and it'll take a lot of lighting regardless of how small the actual star of the shot is.

The short (and much less boring) version of this now skips to Wednesday morning. (You really don't care how many letters and meetings I could cram into three days, do you?) Let's start with a little geography lesson, shall we? 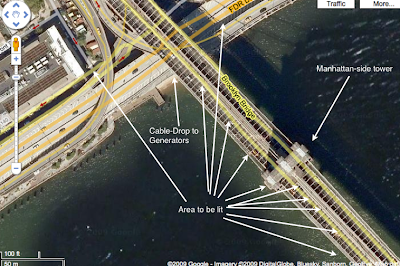 If you measure from the set to the spot where the cable can be dropped to the road below the bridge where the generators will be and and then add in the altitude of the bridge above the road at that point, you'll realize that there's going to be something like a 1000 ft. cable run. And since the cable run is so long, you'll need to use heavier cable so you still have some power running by the time it gets to the set. So, the electricians will be running a bunch of 4/0 (pronounced "four-ought") cable. And did I mention that they'll be running a 5-wire system? So, it's not one 1000' cable run; it's five 1000' cable runs. (4/0 isn't really needed all that often, so finding 5000' of the stuff means renting it from practically every rental house in town.) The stuff comes in single-line lengths of 50-100', so that's a lot of pieces of cable. Oh, and 4/0 weighs about 85 lbs. per 100 ft. So, you're talking about quite a few big strong guys to lay out 5000' of cable that show up in at least 50 pieces and weighs damn near 4500 lbs.

And another thing. See that little spot where the cable drop is? It's still another 2500' or so to the spot where the bridge finally drops to street level. That's the spot where they'll have to unload all the cable from the trucks and haul it all up onto the walkway (which as the name might infer, won't accommodate anything bigger than a golf cart...and getting golf carts on short notice was a neat trick too.) And that's just the cable. They'll still need to haul up all the lights and the stands and the electrical distribution boxes and the other cables that run from the distribution boxes to the individual lights and the ladders and the clamps and...lots more shit.

And then they'll need to set it all up.

If memory serves, there were 20 Grips, 25 Electricians, 4 PA's and 5 Teamsters involved in this little pre-light...for three days. And we were barely ready to shoot by the time the sun went down on Friday night.

(One little side note: While our 50-odd people with their 10 tons of equipment and golf carts and such were setting up, they were also doing a really good job of making sure they peacefully co-existed with all the pedestrians and cyclists who use the walkway every day. Ah, the cyclists. They're all such nice people, wanting nothing but peace and harmony with the Earth and their fellow man. Mostly I remember their friendly greetings...either an ear-piercing whistle or a hearty "Get the fuck out of my way asshole", as they sped by at maximum velocity and minimum clearance.)

A diligent search of YouTube didn't turn up any video of the scene we were shooting, but a guy by the name of Steve Spak, was on the bridge that night and he shot some tape. Here's a screen shot from his video and you can watch the video itself, here. 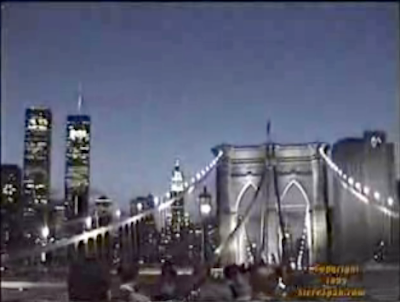 Oh, and while we were waiting for sunset, we had another little shot to get...one that shouldn't have been difficult at all. If you look at the next picture, you'll be looking at the Brooklyn side of the bridge. Directly under the bridge (between the bridge and the lovely green park to the right of it), there's a cobblestone plaza. In the movie, they wanted to have Stuart Little's little Mousetown to be right there on the cobblestone plaza. So all they needed was to get a variety of shots of the completely vacant plaza from a helicopter and then they'd insert the Mousetown with computer graphics.

The helicopter showed up with the camera mounted a couple of hours before sunset. (Remember, we're talking summer, so that's around 6-7:00 p.m.) Me and one other guy went over to the plaza with walkie-talkies so they could tell us when to make sure there was nobody standing in the plaza. In 1999, this was a fairly out of the way area, so chasing people out of the plaza wouldn't be much trouble at all.

So, my radio tells me that the helicopter is coming to make a first pass and since there's nobody in sight, all I have to do is make sure I'm not in the shot, so I walked up the block. Right as the helicopter appears, 10 cars and pickup trucks turn the corner onto the block that leads to the plaza. I valiantly stand in the street and wave my arms to keep them from driving into the shot. I explain what's going on to the lead driver and he says, "Sure, we can wait a minute". I ask him what he and his buddies are up to and he flashes his badge. He's a cop from one of the nearby precincts and they're planning their annual beer-soaked barbecue on the very plaza where only Mousetown should be. He explains that he and his buds need to get set up because a couple hundred cops and their families will be arriving in about an hour.

Normally, I'd be able to get him to cooperate because he'd want to see some movie stars. In this case, a little robot mouse that wasn't even going to show up at this location wasn't going to do the trick. Luckily, I not only had a permit for the location (he decidedly did not); I also had a cop on my side who outranked him.

Their party wasn't delayed by much at all.
Posted by Nathan at 9:49 AM

Great story, Nathan. Your recap of the rig -- and all that 4/0 --made my back hurt just reading about it...

One minor correction: only the very lightest type of 4/0 weighs 85-86 pounds per 100 foot roll, which is the standard length used in rigging such long runs. The thickness of the insulation varies greatly, and much of 4/0 I've had the misfortune to use was a good ten pounds heavier than that. The last time I put a 100 foot roll on the lamp dock scale, it weighed in at 96 pounds. Lifting one of those babies to your shoulder is bad -- doing it all night long is murder.

Sometimes I wish I'd been smart enough to start out in sound, rather than lighting...

First, thanks for actually reading this post. The one after it seems to have been something of a distraction. And as to the weight of the 4/0, my only personal knowledge amounted to, "damn, that's some heavy shit". I looked it up on a supplier's website and it's not surprising they'd list the light version.

Just wanted to say that, despite the fact that this post only has 2 (now 3) comments, and the other has 115, this one is by far the more interesting post.

I like all of your work-related posts. They make me laugh and laugh (especially the part about the cyclists, in this particular one). It's just that I can never think of any witty replies to them.

Great story! I kept scrolling down to see when you were going to toss out the nickname for the 4/0 cable, but....apparently you have more decorum than your Blog's introduction would lead one to believe!

Welcome to the blog. And I resent the implication that I have more decorum than...

You have my profoundest apologies for forgetting to refer to it as 5000' of horse cock.

Say hi to John. We went to college and started our careers together...handling...uh...4/0.