Minutes for the March 2009 Meeting of the UCF.

On Saturday, March 21st, a meeting of the UCF was held in NYC with only two members in attendance. The minutes of the meeting were duly recorded.

The roll was called. Most names called were met with silence.

Not having a quorum, all discussion of the various He(s) Who Shall Not Be Named (this week) was tabled. It was, however, agreed that any further correspondence received from the latest HWSNBNtw, would be answered by sending a copy of The Jaberwocky. Said copy will have random letters excised from the text and then be laminated. Furthermore, a copy of St. Paul’s Letter to the Ephisians in the original Aramaic and of generally matching size shall also be included, implying that there is a code to be inferred if one can only line up the two documents properly.

The out-of-town visiting membership made a motion to adjourn. The other member present did not respond as he was trying to get the waitress's attention to order another Margarita. 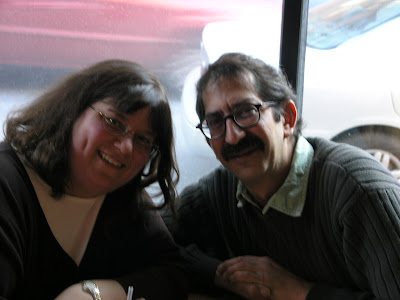 It also should have been noted in said minutes that some of us from whom the two of you would like to extract cerebral tissue are quite capable of expressing our opposition to said extraction in very forceful terms, and would then, equally force ably, demand many free Margaritas in reparation for said desire.

However, the most brilliant idea of responding to HWSNBNtw with a copy of The Jaberwocky laminated and with random letters excised from the text along with a copy of St. Paul's Letter to the Ephisians in the original Aramaic and of generally matching size will be considered when considering as to whether to share the Margaritas.

It's the 21st century gawdammit! We could have videoconferenced this meeting. Fine way to run a secret society; even the meetings are kept secret from the membership.

And cerebral tissue? Good luck, McDuck. I'm nearly out. As a wise woman once said, "Brain and brain! What is 'brain'?" Indeed, wise woman. Yes, indeed.

That wasn't taken in a certain Chinese restaurant located in Queens, was it? :D

Your opposition will be duly noted when you show up at the damned meetings.

I'm pretty sure the "wise woman" in question was actually found to be distinctly lacking in functional grey matter. Perhaps the two of you would be sympatico?

I'm pretty sure you should read that paragraph again. XD

And not even then, really. (Once was once more than enough.)

You see what happens when I attempt to fulfill my civic duty? You have secret meetings without me and attempt to eat my braaaiiinnnnzzzz.

Anyone who attempts to steal my brains will deserve what they get.

Well, conspiracies to steal braiinnnzz aside, it seems much more normal than your meetings with JtS. We even get a nice photo of you both!

Anne, I'm not sure normal can ever be a word used when two or more, or perhaps even one or more, UCF members get together.

Although at least no stinky togu was harmed in this meeting.

Normal? What is this normal you speak of?

Oh, I'd know but someone attempted to extract cerebral tissue from the scrambled matter I carry around with me and now I have a headache. At least I know what caused it now.

Hey, I got a text message from N la Femme during the sekrit meeting. Does that count for anything?

It was a secret experiment in long-distant cortex extraction.

It would explain much. (eyes twitching toes suspiciously)

Vince, in an encounter with stinky tofu, it's not the tofu that gets harmed...

Glad you had fun!

And once you get the cerebral tissue, what exactly will you be doing with it hmmmm? This wouldn't be some sooper sekrit project to create the ULTIMATE BLOGGER!!! would it?

It's almost like they haven't been paying any attention at all...or maybe missing some brainzzzzz?

Tania, it counts for a lot, especially considering what it was in reference to... :-D

Cerebral Tissue? Ha! Fooled you, I'm not wearing any.

Cerebral Tissue? That wouldn't be anything like toilet tissue, would it?

I like to use cerebral tissue in my gift bags. Very pretty, though it may explain why I've been feeling less than s-m-r-t lately.

Home, home on the brains,
Where the deer and the antalope graze
Where never is heard an extracting word
and my mind is fuzzy all day