Yikes! What Happened To Your Blog?

That's the subject line and the content of an email I got yesterday afternoon.

A bunch of people asked me why on Earth I had asked for the review that resulted in yesterday's shitstorm. Why do kids lick flagpoles when it's 10º outside? Why do grown men take chainsaws up into trees and make the cut on the wrong side of the branch they're sitting on? Why did the U.S. elect George Bush twice.

I guess people are stupid and as they grow, their stupidity just reaches for more impressive levels of stupidity. Hey! I'm people too.

At one point yesterday, I said I'd be posting a review of my review. When I said that, I thought the comment thread was more or less entertaining. Sure, the insults and the petulance kept going off the rails, but they also kept veering back toward having a sense of humor. As the day went on, and then, when I looked at what had happened overnight, I decided I wasn't having fun anymore.

So, I'm done with it. The only thing further I'm going to say is, "I'm a big boy. I volunteered for the skewering knowing full-well what I was letting myself in for. I have some quibbles with the review and a couple of things from it that I should probably take to heart, and if I have any real complaint about it, it would be that it was kind of a lazy drive-by review. But frankly, it wasn't all that bad. I can live with it."

Side note: Last week's review of the Chinese Christian kid was more like when the retarded kid in Eighth Grade wants to be on the relay-race team and even though you know you're going to get a chance to laugh at her when she runs weird, you tie her shoelaces together just to make it worse. Sure, she asked for it and you can unload both barrels at her, but there's no law saying you have to. Some people's blogs make it clear that they have no idea what they're getting into. There's a point where picking on the clueless just crosses the line into vicious and unnecessary.

So, anyway, I'm shutting off the comments over there 'cause I've had enough now. I'm also deleting L.B.'s last contribution. Why? Because I can. Because I feel like it. Because it is my blog and I can do any damned thing I feel like with it. I'll just let everyone know that she closed with, "Ciao, y'all." That's a welcome sentiment.

P.S. Anyone who feels the need to comment about how unfair I'm being should know that I'll probably just delete that shit too. Sure I'm being unfair. Yesterday, I was fair. Today I'm deleting anything that doesn't smell like candy-coated bunny farts. Electric unicorn rainbows will also permitted. I'll probably even leave in insults as long as I think they're funny. (Hint: I thought Ghost's reaction to being called an asshole and his message to the People of Polybloggovia was pretty damned funny. Some of the rest of the stinky pile?...not so much.)

Anyway, I'm ready to move on with new posts that are too damned wordy, (who knows, I may learn how to edit), and my pointless header (which changes every couple of months anyway), and my sometimes nit-picky posts (which warn you that they're going to be pedantic before they even get started).

Have a lovely Thursday. 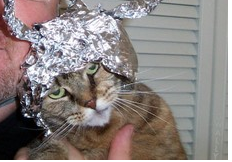 For the record, i've always liked your header.

Well that was uncalled for!

Oh. wait. That's because I made that one.

Just make sure you read the comment thread from the Chinese girl's review. I'll point out that I'M THE NICE ONE.

I'm glad at least one of your cats is reading Rense.com and taking it seriously. There's some bad shit going down, and someone in your house ought to be ready for it.

Though you might want to tell the cat that the foil can actually improve reception, kind of like with TV "bunny ears." He should try using an insulating material instead.

I think the tinfoil hat looks very stylin' on your cat. It may start a new trend. Have Glaghghee & Stinkyboy seen that picture?

I "borrowed" that pic from some corner of the internet. My cats are completely rational. (I'm also pretty sure one of them is developing opposable thumbs.)

I "borrowed" that pic from some corner of the internet.

Tin foil AMPLIFIES your thoughts so that the government and aliens can hear *more* clearly!

You want me to cite the MIT study AGAIN?! Jeesh!

You wanna keep the aliens out, you gotta use insulating material, like lead or styrofoam or bricks.

Personally I looked at that, thought of baked potatoes, then logically followed that with baked cat. I mean kittens are good in pies, right? And the cat is already wrapped in foil. Seems a shame to waste the foil.

Jim, I recommend braising. Those things are pretty tough unless you go with low heat/slow cooking. And here's a spot where I'll definitely have to break with Michelle. The styrofoam just becomes a black smelly residue and the bricks make it into a tandoori dish...damn near inedible.

I just want to be clear. I spent over 4 hours reading your blog and taking notes before I wrote my review.

Lazy and drive-by is not quite what I was aiming for. Succinct and to the point is.

My apologies if that is how you felt.

Nathan, I am going to be very careful before I eat anything you give me on Saturday.

And Michelle -- I don't need tin foil. I can hear you just fine, thanks!

Sounds like what you want for kitten is probably sous-vide, then. I'd love to try it myself sometime, and it doesn't sound too difficult if you have the gear, but then the whole vacuum-pack-and-keep-the-water-at-exactly-x-degrees thing kinda intimidates me, too.

Cat on a stick is good. With hot curry sauce. At least it was good in Morocco, little chewy though.

Also, you should probably make sure the Berber waiter actually knows the English or French equivalent of "Cat" is not "Meat" in the generic sense. Just sayin.

If you get clawed up, it's your own fault.

(And I have to admit I have friends who have eaten both cat and dog.)

Michelle, what makes you think ShopKat hasn't partaken herself? Or do you mean you want to tell her in case she wants to get Jim to share.

I mean, Jim thought she was pregnant. Has he checked to see if any of the neighbors are missing a feline or two that they've chalked up to eagles or the weather?

I think what you really need here is a picture of a cat with a lead brick hat.

Or a teak hat.

Well, I don't think ShopKat ate another cat, though I did originally find her on the back porch, frozen and shivering, staring through the glass door at Stupid and Tubby. Hmmm maybe she wasn't cold, maybe she was hungry.

But then again, remember where I live. Maybe she ate a moose. Whole.