Stop Me If You've Heard This One. (Yeah, Good Luck With That.)

Once upon a time, I recommended that you guys should be reading Elana Frink's Girl on Girl Action. Elana is an aspiring writer living in L.A. Let me clarify that by saying that, as far as I'm concerned, she's already a writer, she's just waiting for the people with all the money to get clued in. She has a warped sense of humor that I happen to like a lot and which, someday, will earn her bags and bags of money. (She also has the kind of written voice that's very distinct, therefore lending itself to famous Directors and faceless Studio Suits completely missing the point and making really stupid pointless movies, but that won't be her fault.)

A couple of days ago, Elana mentioned another blog she'd run across and one post there in particular. On her recommendation, I went over and checked out Ryan's The Glassblower's Cat. The particular post she linked (yes, that one in the previous sentence), is about how actors invariably fail miserably to articulate just how it is that they manage to create the characters they become. Go read it if you want this post to make any friggin' sense to you. Go ahead. It's not that long and you'll enjoy it.

There's a couple of things Ryan didn't mention and there could be any number of reasons for the omission. Ryan may be a very tactful guy. Maybe he's humble. Maybe he has in the back of his head the fact that actors can have an effect on a writer's prospects. (This is a ridiculously incestuous business and basically anybody who has made it in any capacity whatsoever, can order the coup de grace delivered to anybody who is still trying to make it in any capacity. Believe me, if Christian Bale had been annoyed at the boom operator on his movie, that boom operator would have found himself operating a completely different type of fishing pole as quick as you could say, "lots of free time on his hands".) Whatever. I'm not particularly tactful or humble and my sense of self-preservation is woefully lacking.

The central point of Ryan's post is how actors answer the question:

"How did you craft such a complex, haunted character with such a fascinating history?"

The first potential answer that Ryan neglected (an overly honest one), would have been, "Well, you do know that somebody wrote all the stuff my character did and said in the movie." I'm not trying to downplay the impact a talented or brilliant actor brings to a role, but...how do I say this...some actors just aren't very creative. They don't all have a whole lot to say on their own. I've encountered more than a few actors who are absolute chameleons when it comes to a written character, but can't carry on a conversation at the Craft Service table. Just watch some actors appearing on the late night talk shows trying to plug their movies without a script and you'll see what I mean. The truth is that some of them are in deep shit without someone to provide their lines.

The second potential answer is one you'll rarely hear because many actors have minders provided by the studio because they're...intellectually challenged. These are the ones who have lots and lots and lots to say, much of it really stupid. These are recognizable by the fact that when they're asked that question, given their druthers their answer will take all the credit for the memorable character they played. Nobody wrote their lines or screen direction. Nobody told them which word to stress. Nobody told them where to stand. Nobody lit them or photographed them with a filter that took 12 years off their face. Nobody cut the thirty-two takes where they kept referring to their co-star by their real name instead of their character's name.

All of this is a long lead in to telling you about a little episode I had completely forgotten about until I read Ryan's post. In the summer and fall of 1994, I was the Location Manager on The Jerky Boys. The Jerky Boys, for those of you who missed their moment of fame, made their names by making and recording prank calls. If I recall, they were just doing it for fun at first and then, since the recordings started making the rounds of college campuses, they actually scored a record deal with the act. Much of it was very funny. Of course, it led to a movie deal.

As is often the case with movie deals like this one, the idea was the thing. The Jerky Boys are selling lots of record, ergo, they'll sell lots of movie tickets. Nobody expected this to be a masterpiece, just a comedy that would make more money than it cost to produce. We started pre-production with a Director, the stars, (Johnny Brennan and Kamal Ahmed), and no script. I'm not sure if there was even really a synopsis. As far as I can remember, there was just the idea that Johnny and Kamal would play themselves, get into some sort of situation because of a prank call gone wrong, and then save themselves with more prank calls and their quick wits.

Without a script, there wasn't a whole lot for me to do when I started the show. It was decided that I'd just spend some time driving around with Johnny and Kamal and they could show me all of their old stomping grounds. Everybody figured that if I got to know Johnny and Kamal and got to know the places where they grew up, I'd be a step ahead of the game when it came time to start finding the locations for the movie. Hey, I was on payroll and it wasn't keeping me from anything more important, so what the hell.

I think I spent four or five days driving around with these guys. I got to see their childhood homes, the schools they'd gone to, the places they had hung out. That got us through the first day. The second day went something like this: One of them would point at a diner and say, "Hey, we ate there once didn't we?" The other would say, "Yup, I think so." Then I'd say, "We'd better go have breakfast there. Gotta make sure I soak up every bit of Jerky Boys atmosphere available." As the day wore on, we'd find bars they had been to at some point in their lives. Those few days were a lot of fun.

Eventually, we got a script and I hired scouts and we found locations and we went and looked at them. On one of these early scouts, I discovered that this movie was planning to jump the shark before the first day of filming. There's a sequence in the movie where the boys have been kidnapped by mobsters who take them to their hideout which happens to be a meat processing plant. They're supposed to escape by jumping from a second-floor window onto the roof of a delivery van and then driving away. I don't remember why, but for some reason, it was decided that the jump was too high and everybody stood around offering ideas on how to deal with the problem. Jokingly, I suggested that the boys could throw out a "string" of hot dogs and climb down that onto the truck. I was sincerely horrified when the director decided that was a good idea (which is, in fact, in the movie).

Aside: In the scene where the boys are being escorted into the meat processing plant, there's a sort-of "Mobster wall of fame" that shows up in the background. The photos are "before and after" pictures of the gang's ex-enemies. The before pictures are all of big lunking tough-guy types (some of the Teamsters posed for these shots) and the after pictures are all huge piles of hot dogs. The last picture you see is of me (in a horrible plaid jacket), and a pile of maybe 6 hot dogs. -- See, now you have to go rent the damned movie. Hah!

Anyway, back to the whole point of this, eventually we started shooting. One day, there's a video crew on set shooting 'behind-the-scenes' footage and interviews with the cast and the other above-the-line types. I happened to be standing nearby while Kamal was being interviewed. The interviewer asked him something along the lines of whether or not he found acting difficult. He answered that it was a lot of hard work. There were all those lines to learn and lots of long hours to work. And then he said something that really got my attention. I'm totally paraphrasing here, but he pointed at one of the producers and said, "I want that guy's job. I don't know what the hell they do all day but every time I look at one of them, all they're doing is talking on the phone. I could do that, no problem."

I don't recall seeing any of that footage in the promotional material.

P.S. I have a feeling this post will teach me not to hype a story for two days before getting around to writing it. Have a happy weekend.

Edited to add: "The Mobster wall of fame" (That's me on the right.) 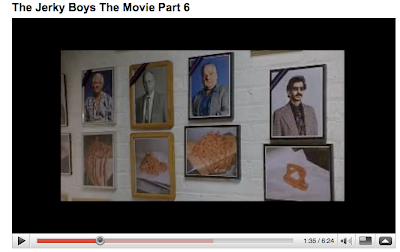 I'd like to pretend I left out those possibilities because I'm respectful of actors ... but it's probably just that I wasn't mining my subject. You were spot on, in any case.

Plus, the post totally lived up to my expectations. Way to keep us all in suspense.

It was worth the wait. Plus, you got to be an extra without actually being an extra. I would've thought that wasn't possible, but you, you make so many things possible.

Nathan, making the impossible possible, since 1983.

the faces that show up in various pictures in the background get a lot more attention than they usually warrant. I can understand it when a shot is going to get featured and/or be a plot point, but I can't tell you how many headshots get looked at to "cast" the dead mother whose photo just sits there and never looked at closely.