I'm Only Mildly Worked Up Over This, But WTF?

Did you watch last night's coverage of Shaun White winning the half-pipe competition?  I don't care how much (or little) you follow the sport.  I don't care if you haven't got a clue what they're talking about when they describe the tricks the boarders are planning.  No matter how little you may know about the sport, it's impossible to watch the good performances without uttering a little, "Holy Shit, Will ya look at that?" 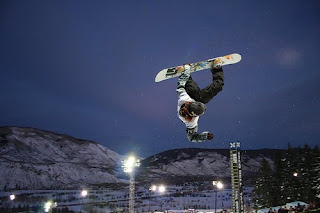 Photo snarfed from imcmahon's Photostream
By the time Shaun White was set to make his second run, he had already won the event.  If you had watched, the first runs, there was no doubt...the other guys weren't even competing in the same sport as Shaun White.  No, this wasn't like one of those figure skating controversies where the commentators blather on an on about this or that deduction of 1/100th of a point by the evil Ukranian judge -- anyone with two eyes knew he had demolished his competition.

So, when they announced the last boarder's score while White was waiting to make his final run, he and his coaches went...uh, batshit!  So after a little celebration, White asks his coaches what he should do -- should he just ride down the middle of the course and collect his gold?  Well, his coaches weren't having any of that -- they wanted a victory lap!  And NBC, of course, had their cameras and mics right up there in the conversation. (Watch the second bit of video on Gawker.)

So White's coach, Bud Keane says, "You freaking send that thing. And make sure you stomp the shit out of it." He followed that up with a well deserved, "Way to fuckin' go, man!"  The NBC announcers got suddenly all apologetic about it all, in spite of the fact that a.) do they really expect gentility from guys who participate in what's known as an extreme sport, and b.) if I recall, this aired after 11:00 p.m., and c.) they don't seem to be able to air anything else live, as it happens: is a 7-second tape delay really beyond their capabilities?

Now admittedly, this doesn't seem to be blowing up into NippleGate proportions, but there's still talk about it.  To which I respond, "Oh, grow the fuck up!"

I was a bit out of touch last week, but it's my understanding that nobody was all that reticent about showing Nodar Kumaritashvili, the Georgian luger getting killed.  I don't know exactly what NBC showed, but I'm told the accident was aired multiple times by Canadian Broadcasting.  And while I'd expect it to show up online, I'm a little surprised by whose websites still have the footage available.  Notably, CBS has it on their site and ABC's Fresno affiliate still has it up.  CNN and some others had the footage posted but have deleted it. Note: I'm not linking it.  If that's what you want to watch, it's easy enough to find.

So, anyway, I'm waiting for the day there's some hostage standoff and all of the networks are airing it live.  And the cops will be on their bullhorns telling the guy to come out with his hands up.  And the camera will zoom in on a window and you'll see the gunman poke his head out the window.  And as he screams (perfectly audibly), "Fuck you, assholes!  Come and get me!" And then BLAMMO. We'll get to watch on live TV as a SWAT sniper blows his head off.

And then the anchor will apologize for inadvertently letting language like that on the air.

And I totally agree about Shaun White. He really is fucking brilliant.

Killing people is as American as apple pie, using that kind of language is only done by terrorists and their supporters.

That kid is amazing... and you can tell he LOVES what he is doing.
As for the language? Who fucking cares?? He isn't there to talk...he's there to fly!

Here's a bit I heard on an interview with one of our local broadcasters that's up in Vancouver.

Seems at the moment in question, when Shawn's team realized he'd won without needing the second run, they honestly didn't know what the protocol was. Should we stay or should be go? And in an venue crawling with Olympic officials, there was not one within earshot at that second in time.

So what the world heard on camera were the celebratory comments leading to the split second decision to go ahead and do the run with the new trick as an adrenalin-filled victory lap. For which, I might add, he garnered an even higher score.

Far as I'm concerned, that young man is a credit to his sport and an inspiration to the up-and-comers in more than one sport. If a couple words everyone's heard before slip out in a joyous celebration, so be it.

Better than him berating a competitor with the same language or whining when thing didn't turn out the way he expected like some others are doing.