It Also Makes Quite Tasty Bread.

A couple of months ago, GF found a great pizza dough recipe. It divides easily for individual pizzas and since it freezes well, you can have a few of them available on relatively short notice. In fact, homemade pizza was on the menu for tonight. In fact, we were going to see how well they worked at making deep-dish pizza.

I took a couple of dough balls out of the freezer this afternoon and then about an hour before we were planning to have dinner, I put them into little oiled bowls in the oven to rise; the oven was just barely warm from earlier in the day.

At some point, I ran out to do a few errands. When I got back, I started slicing toppings. I was especially happy with the 4 cheeses I was shredding. I turned on the oven to pre-heat to 500º.

Eventually, GF walked into the kitchen and said, "The dough's not in the oven, is it?"

"No", I responded emphatically. In my mind (but not out loud, I continued), "we haven't zchmushed them into the pans yet...why would they be in the oven".

As my synapses finally fired on all gears, I said, "Oh, Shit!"

We yanked the doughs out of the oven hoping we'd caught them in time. We were doubtful, but tried slicing one of them in half in case it was still uncooked in the middle. Maybe we could make funny shaped pizzas. 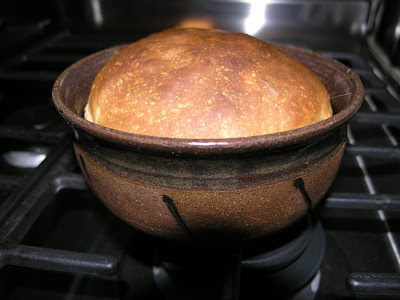 BTW, there's free chocolate in the next post down and it hasn't all been awarded yet.
Posted by Nathan at 7:59 PM