Then We Went to That Place...You Know...That Place With The Thing We Saw That One Time. Yeah, That Place.

Like most NY neighborhoods, I've got a lot of delis nearby.* And to be perfectly honest, most of them have stupid names that I've never bothered to notice. There's no way in hell you'll catch me saying, "I'm just going to stop by the 218 Operating Corp. Grocery on the way home".

So, GF and I have our own names for these stores...names that just came about all on their own and were so obvious (to us, at least), that neither of us ever had to explain which store was which to the other. Here's a short list of the delis I frequent:

-The Prison Window Store: After 11:00pm, the steel gates come down but you can line up at the bullet-proof plexiglass carousel to place your order. Money goes in -- bread and crunchy Cheetos come out.

-The Cheap Smokes Store: Usually the best priced cigarettes in the neighborhood. I don't even think they fell off of a truck.

-The Soap Store: It's closed now but for years, they had their window display lined with faded boxes of some obscure soap powder. I think the boxes were actually empty to prevent anyone from trying to buy one and messing up their display. 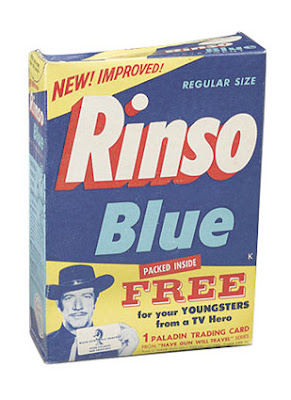 -The Al Jazeera Store: The TV over the front door is always blaring something in Arabic. Good luck getting the attention of the guy behind the counter. I don't think he's moved in 6 years.

Do you have anywhere you go that you refuse to call by its real name?

Hell yeah, we constantly refer to things that are no-longer there. ie, "at the bottom of the Old Stadium Loop, turn right" (the old stadium was torn down when I was in jr high)

I also constantly change names, so "Kroger's" is " K-Rodgers" and so on and so forth.

Oh man, a Paladin trading card? I never even knew such a thing existed.

I didn't even notice the Paladin card. Now I want one too.

(I just picked that picture off of GoogleImages. The real soap boxes were some sort of Pukey Pink brand I never heard of.)

You guys are old.

I'll even trade some of my Kaiser Wilhelm commemorative coins for some Paladin card goodness. XD

My fave name for a store that isn't really named that...
is Sewage.
It is actually named Canada Salvage, and is a Mom & Pop Hardware store that has been there forever! But everyone around here calls it Canada sewage.

I live in Rural American where people refer to place name that no longer exist. Also, people don't live at addresses (unless the house is younger than a decade). However, those properties are addressed with the names of people who haven't lived there for decades.

"It's at the old Yodder farm." (No Yodders live there)

"It's right next door to the Stebbins place." (This property has been subdivided twice and now has 12 homes on it)

::sound of head banging on table::

"You know that ditch that runs behind where the Ford Dealship used to be (hasn't been a Ford Dealer in town since 1972) and over to where that one kid drown (back in 1952, and it's been a covered drain since 1984)."