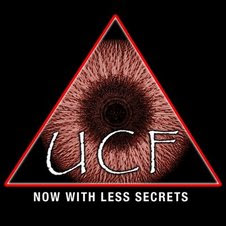 Since its inception, little more than a year ago, the shadowy group known as the UCF has inspired much speculation across the internet. While its members have repeatedly asserted that "it's just an innocuous group of online friends", more than a few intrepid individuals have suspected otherwise. Opinions are as varied as the people speculating. Are they out to discredit quasi-sciencey folks who's only sin is a lack of knowledge of their chosen fields? Are they a front for furthering the pernicious agenda of Evolutionists? Or are they, as some have surmised, in fact a group who's sole goal is to bring down the internet itself by putting too many words on it?

Reached in his secretive Sky-Lair, one self-appointed UCF debunker said, "I'm not necessarily saying they're evil (he did a finger quotes thing here), but I think we have a right to know! What's this shit they're always talking about with their sofas and chocolate cookies and toasters? What's up with that shit? Those are all obviously code words meant solely to keep the rest of us in the dark. Just what are these people hiding?"

Just what are they hiding, indeed?

This reporter has worked tirelessly for almost 12 minutes and discovered the truth! After filtering through the results of a GoogleSearch (and discarding all the references to mid-Florida institutions of higher education... a clever blind alley, that), it can be revealed that the UCF is, in fact, working behind the scenes at the G-20 summit to further their agenda. This reporter was able to meet with UCF representatives in one of their secret bunkers. To reach the bunker, I was first led into a basement loo at 10 Downing street, ushered into a secret doorway and then blindfolded and walked through a circuitous route for over 40 minutes. Entering the secret chamber, I was witness to Russian President Dmitry Medvedev concluding his meeting with UCF representatives. I couldn't make out any of what was being said, but I don't think it would be going too far to say that his demeanor was that of a supplicant.

In the room, there was a large oak conference table with one seat on the near side and 5 masked individuals seated on the far side. Their silence was palpable and eerie as I was ushered to my seat. I was allowed to retain a pencil (with the eraser removed), and a small pad of notepaper, but all recording devices were confiscated and added to a growing pile in a corner, where my escort stomped on them repeatedly. After regaining my equilibrium, I went right to questioning them.

World News Debunkerators Organization: Thank you for inviting me. I'm told you're ready to come out from the shadows and take your place publicly on the World Stage.

The man in the center seat turned to his left and leaned toward his neighbor. The two whispered to each other for a moment, and then this was repeated with his neighbor to the right. After a few moments, the man at the center of the table turned back toward me.

WNDO: We've been told that you're an International organization, but frankly, I've only been able to find a few members who aren't in the U.S. Can you respond to this.

UCF Rep#1: We're actually working on that. We thought we had gone international from the very beginning, having two members in Alaska. The two of them kept whining that Alaska was part of the U.S., but we didn't believe them until their Governor ran for Vice President. We're still a little leery, what with all their foreign words like, glacier and bear, but we're giving them the benefit of a doubt. At one point we were reaching out to add a French member, but that ran up against a brick wall.

WNDO: Oh? What was the problem?

UCF Rep#1: There was a near universal demand (and by that, I mean one of us), for us to require a gift of endless pirrogi shipments to accept the Frenchman. I keep pointing out that pirrogis are Polish, but he won't bend on his demand.

UCF Rep #3: (Yelling), I know pirrogis are fucking polish! But that bastard knows where to get 'em and I'm not signing off on him joining until he sends some.

UCF Rep #5: Shut up! Let's get back to the international thing. We've got a Cannuck! That's international. They've got a fucking bird on their money. How much more foreign can you get than having birds on your money.

His fellow UCFers quiet him down and usher him into his seat, but this reporter is able to pick the name "Ashcroft" out of the babble. At this point, the UCF member at the far right end of the table starts declaiming in an eldritch voice, reminiscent of The Penguin from the old Batman television show.

UCF Rep #4: This always happens, Newt. I told you I should take this meeting alone and then just let you guys know what happened.

UCF Rep #1: Shut up Dick! You had eight years of dictating to everybody. We all agreed that if we were going to ususurp the UCF identity for the sake of world domination, we'd all get equal votes in what happens.

At this point, UCF Rep #4 tore off his mask and stormed from the room.

UCF Rep #1: No, no, no. That's just what he wants you to believe. Maybe a distant cousin, but nothing more.

At this point, the other members of the panel departed angrilly, leaving only "Newt", the spokesman. After an uncomfortable silence, I left too.

I'd like to be able to say that I've lifted the veil on just what this UCF thing is, but I'm sorry to say that I may have only muddied the waters further. Rest assured that I'll work tirelessly to get the answers and report back to you.

Anyway, I thought this report would interest you. Have a happy April First.
Posted by Nathan at 6:50 AM

SIR YOUR ATTEMPT TO MISINFOIRNM THE PUBLIC ABOUT THE REAL NATURE OF THE "UCF" WILL NOT ABIDE. THE IFDEA THE REPOBLICAN PARTY IS ORGANIZED ENOUGH TO BE A PART OF SUCHA FAR REACHINC CONSPIRACY IS LUDICROUS HA-HA-HA-HA! IT HAS BEEN PROVEN THE "UCF" IS NOTHING MORE THAN A FRONT FOR THE "CERN" ORGANIZATION[1] WHICH IS IN TURN A FRONT FOR PENATGON WEAPONS RESEARCH INTO THE KINDS OF WEAPONS USED AGAINST AMERICANS BY THERE OWN GOIVERMENT ON SEPTEMBER 11[2].

IT IS WELL KNOWN THAT *YOU* ARE YOURSELF IN CHARGE OF THE "UCF".[3] YOUR LIES WILL BE EXPOSED IN PUBLIC!!! LIKE THE BIBLE SAYS: YOU BELONG TO YOUR FATHER THE DEVIL AND HE IS THE *FATHER* OF LIES!!![4] GIVE YOURSELF TO JESUS AND ABANDON THE UCF BEFORE YOU ARE IN HELL AND JESUS WILL HAVE THE LAST LAUGH AT YOU SINNER. APOLOIGOIZE FOR YOUR HOAX AGAINST THE WORLD WITH "UCF" WHICH PROBLAY STANDS FOR "UNITED *CATHOLIC* FRAUD" TOO!!! REPENT FOR JESUS SAKE AND *STOP THIS "CERN" EARTHICIDE NOW!!!!!!!*

See what you started?

[1]how girl get pragnent?

We are not amused.

The Queen Of France said...

Silence! We are the only Queen.

We shall prove it:

eh em: We are the champions, my friiiiiieeeend, and weeeeee'llll keep on fighting 'till the end....

It would be really nice if all Royalty linked themselves in their comments so that the polybloggimites know who to blame...er... thank.

That does sound really dirty, doesn't it?

The Ghost Of Freddie Mercury said...

But love, not all of us royals have websites as fine as the one my former bandmates have established since I shuffled off the mortal coil to join the choir celestial. However, dear on behalf of all of us queens, living, dead or fictional, let me just suggest you blame Paul Rodgers. The poor sod can never fill these tight leather pants.

Sounds like something you need to hire someone to spray for.