"It Was A Photo Op! Get The Picture?"

Thousands of people in lower Manhattan and New Jersey evacuated office buildings this morning due to what the Department of Defense and the F.A.A. are calling a "routine training mission and photo-op". Local Authorities seem to have been notified in advance but also to have been directed not to notify the public or even the rank and file within their own organizations.

The F.A.A. has said they will issue a further press release later today, but in the meantime, Polybloggimous has done some digging on it's own. Immediately upon hearing about the incident, Polybloggimous contacted it's own Pentagon Informant, Brigadier Cletus Flightline, IV who had the following to say while requesting anonymity. (Cletus, I keep telling you I can't use anonymous sources, but if you get into any trouble just tell them I said, "Oops. My Bad".)

Some of us in the Defense community were extremely pleased by the previous administration's tireless efforts to keep the public fearful of future terrorist attacks and felt we could not sit idly by while the current administration flushes eight years of hard work down the drain with their Chill Out attitude. We felt that America required a reminder that the terrorists are still out there and fear is the most prudent response.

When Flightline was asked if such an attack was really likely, he responded,

Well, sure, we're talking about the terrorists getting pretty damned lucky on a day when 70 or so City, State and Federal agencies are all asleep at the switch simultaneously, but hey, it could happen. We just managed to pull this off, didn't we? I dare you to say people weren't terrorized.

Further inquiries into this event have revealed that not only was the operation partially funded by "an adult incontinence garment", but that DoD took along an unnamed passenger to "honor his past good works." Brigadier Flightline refused to reveal the identity of the mystery passenger but did let slip that during one particularly low pass by the aircraft over the city, he was overheard to say, "Damn, Lookit 'em run!" 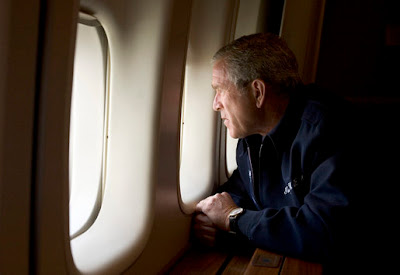 Polybloggimous will reveal additional information as it becomes available.

Disclaimer: The proprieter of Polybloggimous did not leave his home, phone anyone or have direct communication with anyone while researching this story. Details of this incident are still sketchy and Polybloggimous cannot be held responsible for the accuracy of any information contained herein which later proves to be faulty, pulled from his ass, or completely imaginary. If any of this proves to be the case, please accept this hearty, "Oops. My Bad".
Posted by Nathan at 2:56 PM

From now on, I'm getting all my news directly from POLYBLOGGIMOUS.

Only you have the REST OF THE STORY.