O.K. I'll admit it. The first time I heard about people making pizzas on the grill, I thought it was a really stupid idea. I'm not sure if we have Yuppies anymore, but it sounded like something they would do so we could sneer at them. I finally knuckled under.

Yup, we grilled some pizzas today. They were really, really good. Really!

Now, if any of you are expecting a recipe, you'll be disappointed. Pizza is a very personal thing, so you should look around the internet and choose one of the 607,000 dough recipes that show up when you search for it. This is mostly about technique.

First, there's some debate about it, but I went with the folks who advised a hot fire. And it seems to have been the right choice. 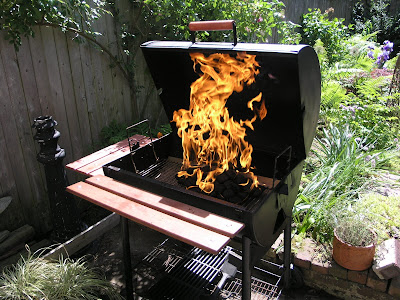 Roll out your dough in a shape that fits your grill. Oblongs seemed best for my grill. You shouldn't need to oil the grill or the dough; just drop it on there over the coals. You may need to pop some air bubbles while the first side is cooking. Leave it over the coals just long enough for the dough to start toasting on the bottom and for it to begin to be rigid. And don't close the lid for this part; you don't want to cook the top any more than you have to at this point. 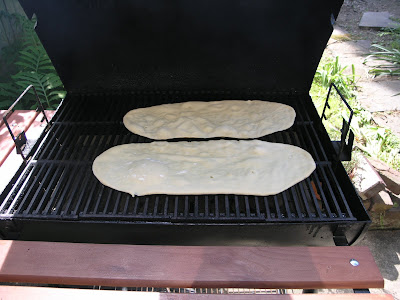 When you've cooked the bottom enough (just a little), take it back off the grill and flip it over so that the bottom is now the top and the uncooked side is standing by to be the bottom when you put it back on the grill. Don't try to just flip it and put the toppings on while it stays on the grill. It'll be a race and you'll lose. 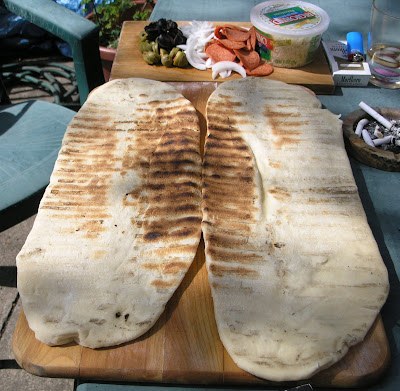 The recipes I read all said you should go light on the sauce because it might get the dough too soggy. I say sauce to your heart's content...the recommenders are obviously a bunch of pansies and should be ignored. 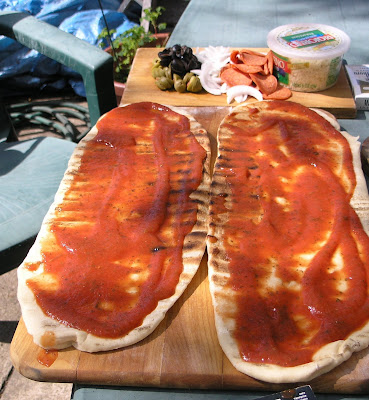 You can't really see it, but there's a hell of a lot of cheese under the toppings and then a little more sprinkled over the top...just to hold things together. On the subject of toppings...put whatever you want on there. The recommenders, once again caution about putting too much stuff on (especially things that have a lot of water content), and here, I'd listen a little. This pizza cooks very fast over high heat and doesn't leave a lot of time for water to evaporate. Also, if you're one of those people who think things like whole clams in the shells belong on pizza, I don't even want to talk to you. I'll listen to justifications for just about anything on pizza, but if you can't just pick it up and eat it, it's not a pizza! 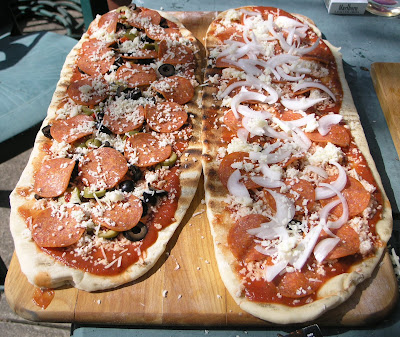 Slap those suckers back onto the grill. Close the lid. You want the heat getting to the stuff on top, don't you? What's that you say? You have a grill without a lid? Shame on you! Go get a damn grill with a lid right this very instant. You'll thank me later. 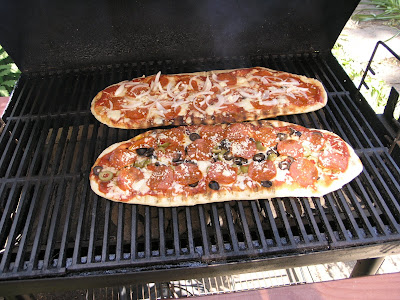 At this point, you're only minutes from done. You basically want to be obsessive compulsive about checking the bottom while opening the lid as few times as possible. Unless you've got a glass-bottomed grill, this part is gonna drive you batshit. You want to let it cook just short of really burning the bottom. A little bit of char is what you're going for. 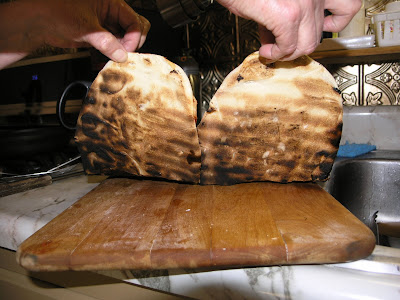 The pizza actually does take on a little flavor from the grill that you won't get cooking it in the oven. We loved it. 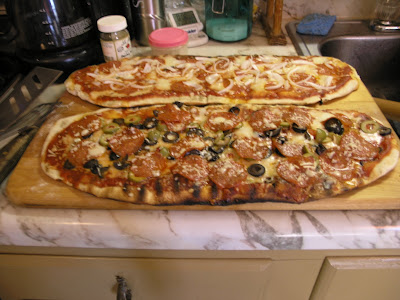 Oh, and one other thing. If you're having this for lunch and you have an actual dinner planned, you should start making it before 3:00 p.m. It's very filling and having lunch at 4:00 p.m. is not conducive to having another full meal at dinner time.

Mmmmmm, I have to say that is one fine looking pizza. I'd try one right now, but I am too stuffed from making a pig of myself eating all those ribs I BBQ'd today.

Now I'm going to go pimp you on my blog.

Wants to have pizza for breakfast at the moment.

Nom nom nom. Except for the olives.