Once Upon A Time In Queens.

One of my first jobs in NY was as a Locations P.A. on Coming to America. The McDowell's Restaurant in the movie was actually a Wendy's on Queens Boulevard that was scheduled to be completely refurbished. The production made a deal to rent the site for a few months to create the McDowell's and my job was to babysit the set while they were dressing it. Mostly, I didn't have a clue what I was doing, but since I didn't have all that many responsibilities, I managed to fake it.

At any rate, the production had also jumped through all of the hoops necessary to keep McDonald's from getting all pissy and injuctive-y and stuff like that. The only problem was that the folks at the corporate offices neglected to tell anyone at the local level of McDonald's.

On the day the McDowell's signs showed up, we were all out in the parking lot watching the signs get lifted into place and having a fine old time. Suddenly, a car came screeching into the parking lot and two men came flying out of it. One of them started snapping pictures like mad and the other one just started screaming. "You people think you can fuck with McDonalds? You have no idea what kind of shit storm you've stepped into!" He went on in that vein for quite a while until he ran out of steam...probably because we were all laughing and that probably wasn't the reaction he'd been expecting. 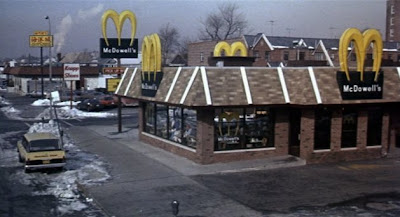 This next part really doesn't have anything to do with anything, but it seemed appropriate.

I love movies that have something after the credits. In fact, I wrote an essay about that once.

You just earned even more of my respect for having something to do with Coming to America. This in on my list of best movies ever.

Well, I was about as low on the totem pole as you can get...but thanks!