At the southern tip of Brooklyn, nestled under the Verrazano Bridge, you'll find the neighborhoods of Ft. Hamilton and Bay Ridge. Admittedly, these neighborhoods could be said to be fairly insular. When I first moved to NY, these were primarily Italian neighborhoods. (I once met a pair of sisters who were in their 80's, lived in the house where they had grown up, and had never been to Manhattan!) There's a large Polish population there now, and a variety of folks with varying shades of brown skin moving in. (The old Italian ladies are horrified...trust me.) 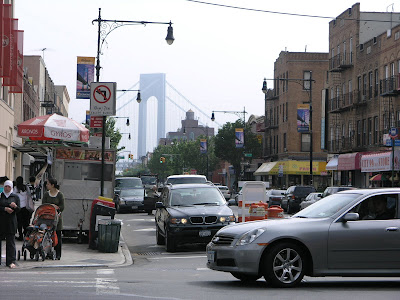 Anyway, this is a neighborhood where the people living there know their neighborhood intimately and they probably keep in touch with the folks they left behind, so they're also up to date about what's going on a thousand or more miles away. What they're probably completely unfamiliar with is what's going on just a few miles down the road or anywhere west of the Hudson River.

Which brings us to this odd juxtaposition. I realize that Brooklyn might not be the first place that comes to mind when you envision going somewhere to soak up some rays, so it's only natural that a tanning center in Bay Ridge might want to make you have visions of some island; thoughts of a white sandy beach with the surf lazily lapping at the shore. I'd get that.

What, however posessed these people to choose Alaska as their exemplar of fun in the sun? I don't see anyone pushing the rich coffee brewed in the hills of Weehawken, NJ. I've never run across someone touting the delicious taste of Norwegian rum. Nobody goes to Sheboygan to see celebrities.

Maybe I'm a little slow. Somebody explain it to me. 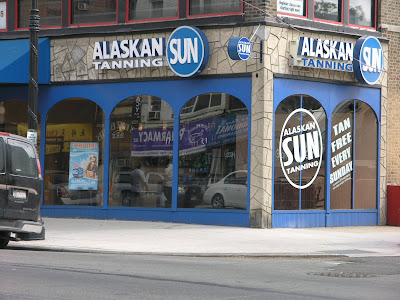 And what about the other six months?

No, it's the artificial sun thing. Everybody knows that the sun in Alaska is artificial.

It's the healthy tan.

You come out paler than you went in.

And what about the other six months?More like seven, but yeah, WTF?

We Alaskan aren't exactly known for tanning, well except for Palin, but that's probably because she doesn't exactly spend much time here any more...

Errm, the dazzling ice crystals reflect light better up there?

The Alaska way is the safe way to tan, you know.

2) Have you never looked at any pics of me? I don't tan. Then again, I'm a whitey. Alaska Natives actually tan nicely.