This May Explain Some Things.

I've always wondered why I'm not a world-famous Academy Award winning actor. (Hey! That's a completely natural thing to wonder about. I bet you do it all the time.) Well it turns out that the reason for my current lack of fame and accolades may trace its roots to the fact that I've just remembered -- wait for it-- I'm actually a washed-up child actor.

I was reminded this morning of a Public Service Announcement my sister and I starred in sometime in the late 60's. It was a commercial promoting the Summer Reading Program for the Jacksonville Public Library. I had the following meaty role: While hanging upside down from a set of monkey-bars, I proudly proclaimed, "Mine's a monster book!" The proof of what an accomplished actor I was is in the fact that I was able to deliver that line perfectly over and over without having the slightest idea what I was talking about. For years, in fact, I was convinced I'd been saying "Mynza monster book". I thought that might be the name of the book, but who cared. I was a thespian. And none of that troublesome "What's my motivation?" crap from Nathan. I just said that line as many times as they wanted while looking absolutely adorable. (You'll have to trust me on the adorable part -- somehow the clip has avoided showing up on YouTube.)

My sister was not as lucky as I was. Her role called for her to ride her bicycle through the park while reading a book she had propped up in the basket. Before the commercial aired, some Safety-Nazi decided this bit of action might not be a great message to send to the youth of Jacksonville, and her part got cut. (HaHaHaHaHa.)

So I'm not a star now because my fame flared too early and was snuffed before adolescence -- like so many of my fellow retired child actors. Since my sister's part got cut, I don't know what her excuse is for her continued obscurity.

Here's a picture of the two of us looking like twins from a few years apart. (I'm the one with the mustache.) 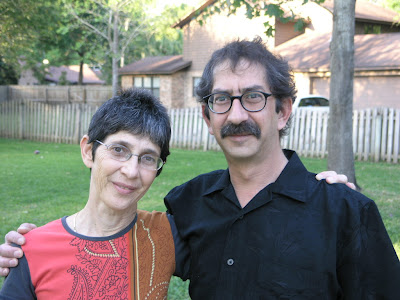 Update: Big Sis tells me she got into the commercial as a more sedate child reading a book while on a swingset. I'm sure she remembers it better than I do. Furthermore, she's going to send me a copy of a picture of us in this same pose from when we looked like twins (before I had the option of facial hair) which I shall dutifully post. And she's going to contact the library and see if anyone can dig up a copy of the commercial itself! That will be a most excellent coup if she can track it down.
Posted by Nathan at 11:22 AM

What a sad, sad story.

And it does 'splain some things...

Hey wait, you have a mustache?