I've written before about how some of my jobs happen really quickly. Somebody sends me emails, tells me what they want to shoot, gives me a little time to prep it and file permits, and then they show up, shoot and leave. Poof!

So, the other day, I'm on the phone with a Producer friend of mine:

PF: Hey, I saw a screening of In The Loop the other day.

PF: Yeah. I was surprised though at what got cut. Almost none of what we shot is in it.

PF: Well, it's not so surprising, I guess. From what I hear, the first cut was almost 4 hours long.

I swear to God, I had to go through my old show records to jog my memory. Until I found my notes, I had no idea what this movie might be. (Even the IMDB listing didn't really help since we barely had any of the cast here in NY and they mostly spent their time being filmed in one car while I road around in another.)

For your own reminder, check out my post on Double Dipping from last June. (The pertinent part begins in the fourth paragraph.)

Yesterday a package of kitchen stuff GF ordered arrived and she opened it this morning. Among other things, there was this little colander that's about 6" across the top. (That's a coffee maker in the background for comparison.) 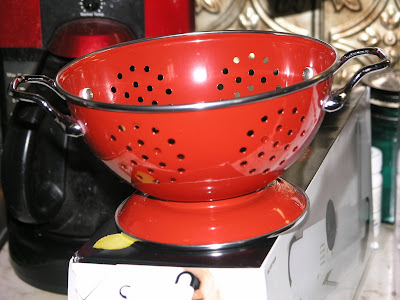 Now, I'm not about to go start counting them, but we have a number of things in the kitchen of varying sizes that qualify as colanders, sieves, strainers and the like.

Me: Uh, did we really need another colander?

GF: No. But it's really cute. And it's red. And it was only like four dollars.

Strangely, I can't fault such perfect reasoning.
Posted by Nathan at 11:34 AM

I'm down to one good colander because the other ones are those mesh ones that food gets trapped in and the other one was plastic and my wife left it too close to the burner and got distracted with whatever book she was reading while she was cooking.