There's still almost an hour to enter yesterday's contest. Guess how many miles we drove on our road trip. Get a prize that I didn't want for Christmas and now have an opportunity to palm off on one of you. (Scroll down you lazy bastard. Do I have to link everything?)

I think this is pretty cool. Sara Watson, a second year art student at the University of Lancashire (that's somewhere in England) decided to make a car disappear. Brava! (This reminds me that I need to do a post about Scenic Artists...they amaze me sometimes.) 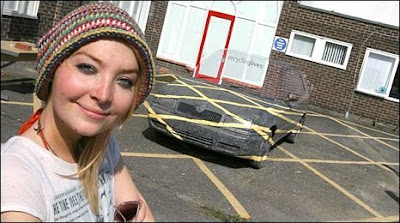 I don't want to take anything away from the U.S. Navy, but I've decided the best way to defeat the Somali Pirates is to sic some of Major League Baseball's lawyers on them for trademark infringement. The Pirates are a proud team with a rich tradition and the brand is being diminished by potential confusion. Let those bastards keep taking money and then having to give it all to some team they never heard of in Pittsburgh. See how long they keep bothering with the effort after that.

BTW, I tend to think the 1897 team would have just chartered a ship and gone over there to kick some ass all on their own. 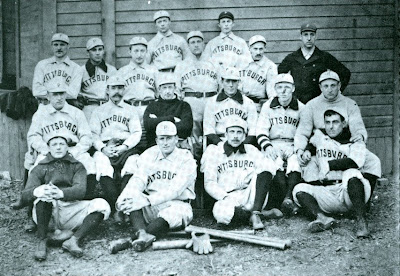 That's all for now. I may add some stuff later today. I may not. I'm feeling somewhat haphazard today.

MWT seems to think that the Ford POS flies! (faster than most commercial jets, no less).

Janiece is of the opinion that we drove as fast as traffic would allow at all times, slowed down to 50 mph for the tolls and stopped for one pee-break. Refueling was achieved by KC-135 aerial tanker. Uh...not so much.

Jeri, on the other extreme guesses that we just went to IKEA (ok, including a few dozen loops of the parking lot looking for a space.) (Shh Jeri. It's GF's rental from work.)

neurondoc believes that I allow for a half hour difference in time zones as you travel south along the east coast. (You'd have lost anyway.)

Jenny and Kimby both put in fine reasonable guesses...but not winners.

I'm not telling what the prize is because I want Michelle to be surprised. Then she can tell you all about it (and let us know her rating of the prize in terms of awesometicity or blatant suckitude.)
Posted by Nathan at 11:00 AM

I got the prize I was hoping for too. :D

If I had time to check on my blog reading yesterday, I would have said 201 miles. Honest! Oh, well, that'll teach me...

And to think that's street legal in England. Those crazy Brits!

Jeez Jeff, If you think flattery is gonna make me change my ruling, you're doing it rwong.

Figured you'd be aiming for one to two hours away. Nice day trip without feeling like you've spent the entire time in the car.

And Nathan, I keep telling you, you HAVE to go to Jungle Jim's one day.

3. It's near Cincinnati. If I'm never within breathing distance of Cincinnati again in my life, I won't have any regrets. (Have I told you how much I loathe Cincinnati? No? Well, I do.)

Nathan, we have discussed this before, and it's come up a couple times in relation to Cincinnati.

All I'm saying is that if you were in, say, Columbus, it would be worth your while to drive down to Jungle Jim's.

Also, Jungle Jim's is where I've seen durian being sold.

This may surprise you but durian isn't really any kind of a draw for me. :D

You were asking when we'd discussed Jungle Jim's before.

I was giving examples. :)

Dang. I just read the original contest post and was going to answer "212 miles. Is it too late to guess?" when I realized I ought to check to see if there was a more recent post with results and/or a contest extension. Sure enough, it IS too late. :(

Is it too late to enter?

Did I win yet?

Michelle, I can personally verify at least 10 purveyors of durian, all within 5 miles of Nathan's apartment.

Do you want one?

And Skyline Chili, while it is not actually Chili, is a good enough reason to visit Cinci, especially if you go for it on Labor Day to take in the fireworks, which are the best I've seen outside of Japan.

John, I do NOT want durian. As I said, it was JUST context!

My reason to go to Cincinnati is because I have friends there whom I miss.