Another Saturday Multi-Post. Admit It. You Missed These, Didn't You?

So the cats did their normal thing and woke me up around 6:30 this morning. Stupid felis domesticuses. (That probably isn't the right way to pluralize that but I don't know any Latin even after I'm properly caffeinated.) Anyway, the local CBS Morning Show (whatever they call it), had this guy on. And they kept announcing, "We'll be back with Paul Potts right after this message.", and I kept thinking they were going to have Pol Pot on the damned show. And I thought that was going to be one hell of a get, what with Pol Pot's rather negative opinion of all of us American Running dogs, and what with him being severely dead and all. 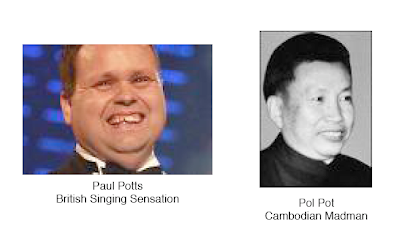 I was really disappointed when they put the singing guy on. If I were him, I'd have changed my name just to avoid any negative connotations. Something like "Paul Potts, the guy who sings and hasn't killed anybody at all", would work for me. And if he doesn't want to change his name, he could at least foam at the mouth a little just for ambiguity's sake.

I'll be back later with something else. I don't know what it will be and I can't promise it'll be worth your time or mine...but it'll be something. Hey! It's Multi-Post Saturday. Yay!


Yesterday, one of us here was in charge of making the grocery list for dinner and one of us was in charge of going to the store to buy the things on the list; I won't say who had which responsibility. (And while we're on the subject, I've never been able to decide if it's nice of the grocery store to keep my stuff on their shelves until I need it or if I'm pissed at them for keeping my stuff on their shelves and making me come all the way over there for it.)

Anyway, last night was taco night. At first glance, the list appeared to just have every ingredient needed for tacos without any regard to what we might actually have in the house already. A quick perusal of the cabinet and the fridge allowed a number of ingredients to be crossed off the list. A second perusal of the list revealed that there were other ingredients that were on neither the list nor on our shelves.

All of this prompted me to say to GF, "This has got to be the worst shopping list ever!" (Oops, I told.)

I can live with this slight indiscretion, since she's likely to read this and say, "Oh, so is this some of that brilliant you've been waiting for?"*

So I was doing something that made complete and utter sense to me...


and GF says, "You just make this stuff up as you go along, don't you."

In her defense, she kissed me after she said it. (Also, in her defense, I thought, "Just how many years has it taken you to figure that out?")

Don't give him such a hard time, Nathan. For all you know, he had his name legally changed from "Stalin Hitler."

This cracked me the hell up. "Severely dead." hehe.