...as in we wonder what the hell is wrong with her!

If you've been paying attention, you know we have three cats. Teufel, the young lad, gets into stuff. That's his specialty. If you try to pull him out of stuff, he deploys all of his pointy bits in a valiant attempt to stay inside of whatever stuff he's gotten into. He's very single minded. (That's actually a polite way to say that he's got a tiny little brain incapable of holding more than one thought at a time.)

Widget, the older one likes to throw up. Often. If you're in the room when she does it, she'll look at you proudly while standing over it. Then, Teufel and LuLu will come and eat it if you don't clean it up fast enough. (By fast enough, I mean you could have Star Trek's transporter and still not be fast enough.)

LuLu farts. Really noxious, peel the paint off the walls farts...which taken all together makes the current storyline on Girls With Slingshots totally appropriate.

Recently, we've noticed that there's only one thing worse than her farts. That would be her contributions to the litter box. They're worse. Much worse. Like what the fuck is that, chase you out of the room worse. And since she only makes the most paltry effort at burying her...contributions, they last much longer. This too, is a pride thing. 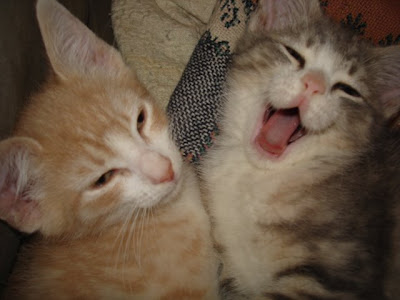 (Please note that this is an old recycled picture, but it seems to show everyone's appropriate attitude and I didn't think you really wanted to see any of the other choices for visible evidence.)

I'm at a loss as to how to deal with this. We're in Brooklyn, so, by necessity, our cats are strictly indoor cats. And it's not like we have a barn or anything to banish her to. Changing her diet isn't really an option either. We already have to close Widget into the bathroom twice-a-day so she gets a shot at her fat-cat-diet food before the other two monsters can get at it. We're not about to feed them in a rotation or stick one of them in a closet at meal times.

I've found all sorts of suggested solutions for this on the internet, and truthfully, all of them seem to involve major expenditures of time, money, effort and/or some combination of all three. I'm honestly not desperate enough to go there yet. Mostly, I just thought you all needed to hear about cat farts this morning.

Ah, cat farts. Nothing quite like them. It's the protein diet.

That comic is too funny. Disgusting but funny. And spot on, too. *Gak*

Kat also has issues with burying his scat.

Even though we have extra large boxes, for some reason he scrapes *outside* the box, which of course doesn't do a thing to cover the mess he made.

And if it were only the cats that were gas powered around here...

Perhaps there is a method to capture the methane. Could be a good source of alternative energy.