A little Bit Of This. A Little Bit of That.

Here, have an advance look at my next two days. In no particular order, this is what we're going to be looking at so we can choose a total of 5 locations for a two-day shoot. (We'll go look at them in a particular order because we have a schedule to keep and some of the locations are expecting us at specific times, but I didn't have the energy to make Blogger show them to you in a particular order. Besides, some of my readers prefer randomness.)

BTW, we won't actually shoot in NY until early April and I haven't the foggiest idea when you'll be able to watch it on T.V. Anyway, here's the tour for you...just quicker and warmer with less car-sickness.

I like this place a lot, but it probably won't make the cut. Looking cool doesn't always fit the script best. Too bad. This place would hurt the Producer's checkbook, but it would be a piece of cake for me. 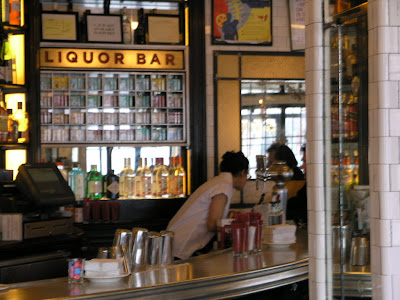 What could be more iconic than a place under the elevated train. 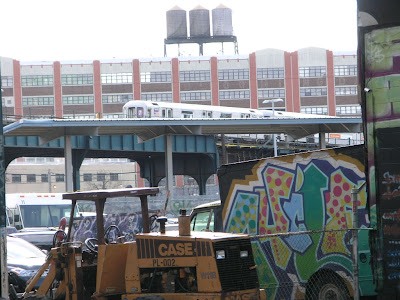 Wouldn't you sit in that window if you were bribing someone in government? 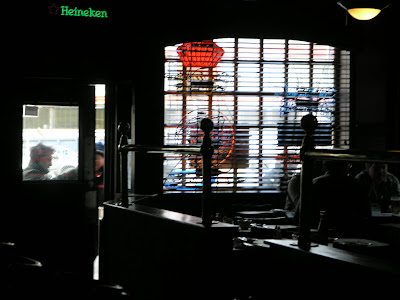 Sure hope the cops can't see us. 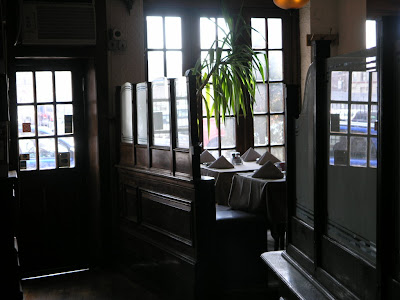 Hey, it was a tough day at work today. Let's go bond. 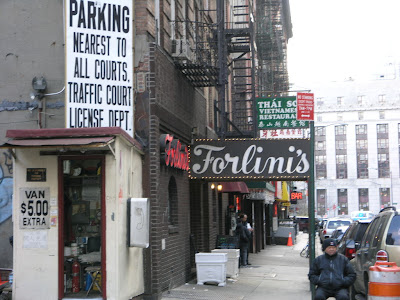 Who knew the cops had long lenses? 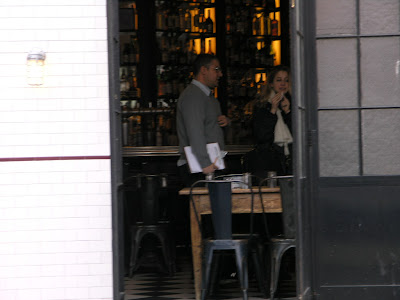 This looks like a great place to rendezvous at 2:00 A.M. Incidentally, some artist may actually own the intellectual rights to this stuff, in which case, we'll need their permission to shoot this street. The entire block looks like this. 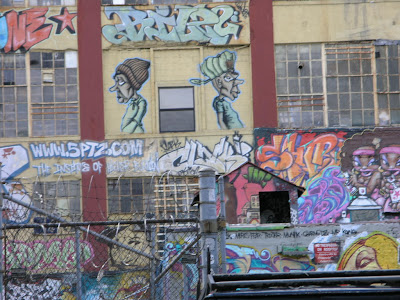 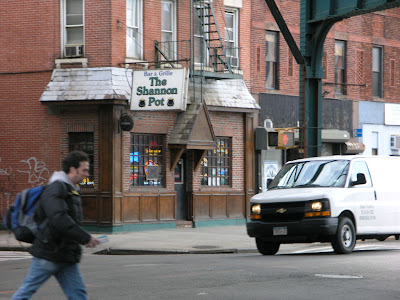 Oooh. Such a lovely night spot. 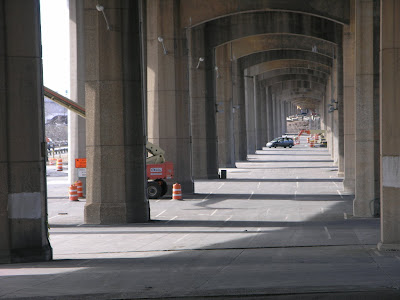 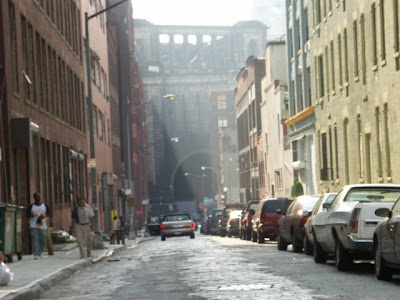 Probably not here, because, believe it or not, there are a bunch of actual nightclubs here now. The street is jammed with limos and Hummers until 3:00 a.m. It's hard to make a place look desolate and scary when there are hundreds of hipsters pretending they don't want to be seen arriving. 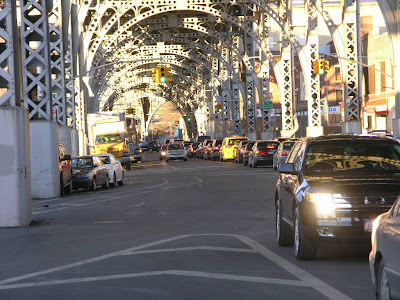 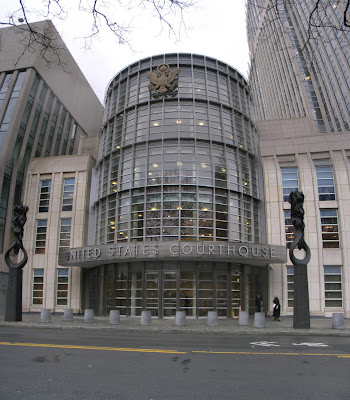 Look, we live in the city, but we jog with our dog across the river. Pay no attention to the massive jump in geography. 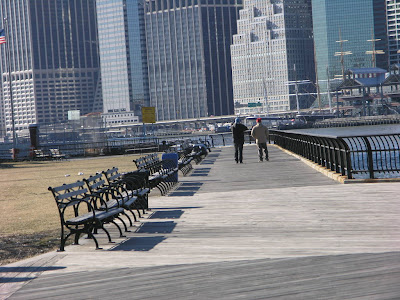 We, could, however jog a couple of miles away across this other stretch of river. 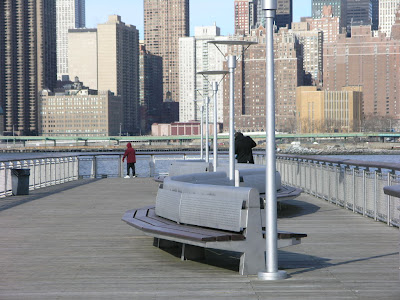 Uh, what the hell has this got to do with the show? 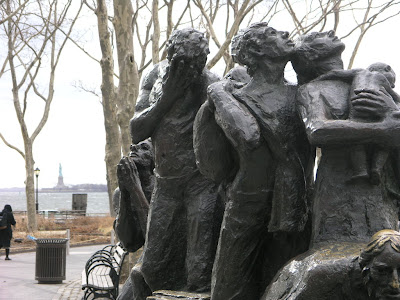 I want a lawyer! 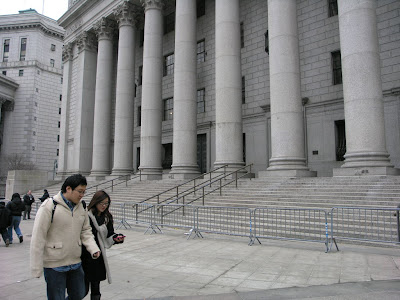 No, really. I want a lawyer. 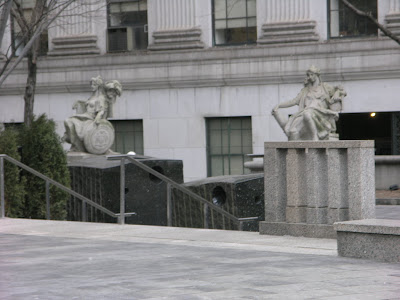 Never mind the lawyer. Wouldn't this be more fair if we both had guns? 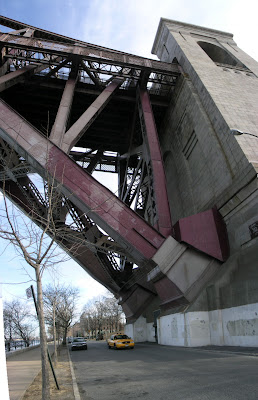 Don't you all feel like you got a free advanced viewing of the show? Sure, it might have been better with actors and sound and dialog and stuff, but the locations are really the most important thing. And it's a lot easier at this stage of the game before you have to haul a bunch of trucks and one-hundred or so of you closest friends around with you everywhere you go.

Yes, us crew-folks do all have a very narrow view of which part of the process is most important. And the rest of you annoy the shit out of those of us who are right.
Posted by Nathan at 9:25 AM

Obviously I need to save up my money and come to New York when you're not working and pay you to show me all the cool places and go bar hopping at all the cool bars.

Well, if I did, then technically you'd be working, but it'd be work where you could eat and drink and make fun of people (probably including me being all touristy, though not embarrassingly so) stuff like that. You know, fun work.

Maybe we could get John to come with. But NO stinky tofu. Nope. And no Dominos, either.

Great show! I think it's your commentary in between shots that really makes it great. I like how everything about the action and plot is left up to the imagination. :)

Wow. What sucks is that after living in NY for 9 years I recongnized maybe one place and guessed another.

Ramps, Nathan. Ramps are the most important to a crew!

Okay, but if you have to scrub all that graffiti off and spray new graffiti on, is that worth it?

And how can you beat a place that has a sign, "Liquor Bar." I mean, how great is that.

Didja see those pics of the courthouse steps? I'm gonna get the set dressers to cover all of them with layout board (cut about a 1/6th of an inch too big on each step) and not tape it down very well. Oh, and we'll park the prop truck right out of frame and the grip truck around the block.