Variations on a Meme.

I pick and choose which memes I'll follow. I (almost never) assign the meme to others 'cause I think that's just plain rude (usually). Now there's one running around that I like. It first came to my attention on Kim's blog and I responded, following the rules, in her comments thread. Then Eric decided to jump on board. Feel free to join us and play (on your blog or in anyone's comments you choose...or not). (BTW, in the interests of mayhem, I hereby invite you to post your response in any blog flying the UCF Logo and to do so without any explanation whatsoever. Go ahead. They'll thank you. Really!)

Anyway, I decided that since I'd already done one version of this following the rules, I should put something up here with the rules slightly changed. Here's the original rules:

I did two slightly different versions. First, here's a version where I picked out the right sentences, but, instead of random books, I chose from five books by Neal Stephenson, in order of publication:

William Anothy Cozzano’s office was a scandal. “Staring at us.” “People started doing this about the time you left for Cambridge.” Nevertheless, the very notion that such a rustic fellow would challenge Upnor to a duel practically had the French nobles falling down into the path with tears running down their cheeks. “I’m going home now,” he says.

My second paragraph all comes from one book; Jeff Shaara's The Glorious Cause.

He had sat out the raw misery of the storm through most of the night, keeping his boat tight against the shore. At least this day would have accomplished something. The lookouts slouched in their towers above him, and the only sounds were low voices, quiet conversations, and, back in the wooden huts, the work of the cooks, the rattle of tin plates already piling up for the evening meal. When they saw the officers, hats went up, the flag held out, and behind them, more men, a second flag, one man holding it aloft on the point of a bayonet. And it is Christmas Eve.

O.K. Here's what I find interesting about this.

1. I actually like that the one paragraph cobbled together from Shaara's book tells the entire story of the American Revolution without any of the nasty battles and stuff. (Quick. Without looking it up, tell me what year the Revolution began and when it ended. Score extra points if you know how much longer it took to ratify the Constitution. Extra, extra points for Furiners getting it right.)

2. In spite of the fact that Stephenson is usually a fairly difficult (though completely worthwhile) read, Shaara manages to pack almost twice the word-count into his mashed-up paragraph. The fact is, Shaara never met a sentence he didn't think would benefit from a bunch more words. And his tactic seems to be that you can just keep adding commas as long as you like and you won't have to start a new sentence until someone jams a period in there. Let that be a lesson to you schoolkids trying to come up with 1200 words on the history of your hometown.

3. That's all I find particularly interesting here. Sue me.

Oh, BTW, there's still time to join The International Internet Bacon-Abatement Coalition. Bacon is embarrassed and it needs your help. 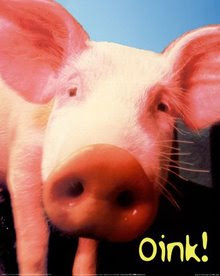 You asked for it.

Just keep in mind that I'm at work.

The World Wide Web is the Guttenberg press of our time. Because it's very easy to mistakenly type $gender = 'M' instead of $gender == 'M', some people advocate rewriting such a condition as 'M' == $gender, which will create error messages if mistakenly typed as 'M' = $gender. Many others will be useful from time to time; we describe some of them next. Any extra spaces and carriage returns are completely ignored by the browser. Our advice: keep hacking!

I would like to point out that the two books that claim to be "the definitive guides" are two of the last books I reach for when I've got questions.

Did they have watch towers in the Revolutionary war?

Yes. They were considered quite the revolutionary development.

Okay, so about these revolutionary watchtowers: did princes keep a view from them? What about the women, what were they doing? Did their servants have shoes? What kind of noises were made by the wildlife outside in the cold distance, and was it windy?

Ok, I have turned around grabbed the first five books off the end stack in my office. These are not work-related all.

There are some great words in the Oxford English Dictionary. When selling, the canny Better Foodie encourages vendors with the gastro-good life. Mrs. Makely, however, didn't mind that at all. A good cologne with lime and lime-flower notes. The amount of ppi or dpi is referred to as the resolution of the artwork.

BACONS OF THE WORLD UNITE! THE ONLY THING YOU HAVE TO LOSE ARE YOUR MEMES!

Aw, man. The five books I chose at random turned out to be Charlotte's Web, The Sheep Pig, Olivia, Animal Farm, and Blandings Castle. Then I saw that sweet face at the bottom of your post...and...I couldn't bear to go on.

Sigmund Ausfaller woke up shivering, prone on a cold floor. He nodded slowly at that and looked through a couple of pages on a clipboard. He stopped outside the door, turning his head to listen. A pair of Cygnans took him then, like a sack of laundry, and zoomed off with him. I suspect it's just beginning.

- all from the "most recently read and need to shelved properly" scifi pile in my den.

You know, that paragraph almost makes sense. I may finish the last hundred page of my fucking brain eating damned book via this method. Yeah. Rap "artists" do it right? Sampling or something it's called. They get awards and shit for it. I think I'm on to something.