The Trivial Shall Set You Free.

Today, I'm going to offer some unsolicited advice to my fellow bloggers. Some of you, (and you know who you are), like to post about topics that tend to upset people. As often as not, it's on a topic that is highly Googleable (yes, dammit, that's a word). This often results in you being found. It's also a known fact that among the people who take the time to Google a topic which might upset people, there is a large subset of people just looking for something to be upset about. They can be divided into further subsets, consisting of the bat-shit crazy, the frothy, the poo-flinging monkeys, the hideous arse-candles, the unhinged, and possibly worst of all...MENSA MEMBERS! As often as not, they show up to defend some paragon you've dared to insult and for some unfathomable reason, they take umbrage that in addition to the fact you may have called into question their idol's credentials and/or sanity, you may have used bad language to emphasize your point. They get particularly wound up when you call the object of their affection a Fuck-nut weasel.

I, on the other hand usually stick to inanities. For the most part, inanity begets inanity and I rarely find myself forced to deal with anyone who gets me all het up. One notable exception was when I posted this picture of a candidate (for what, I can't remember) who thought it would be a brilliant idea to speak to a group celebrating Hitler's birthday. (I didn't even notice at the time, but the "Happy Birthday" streamer across the front of the dais was an especially festive touch.) 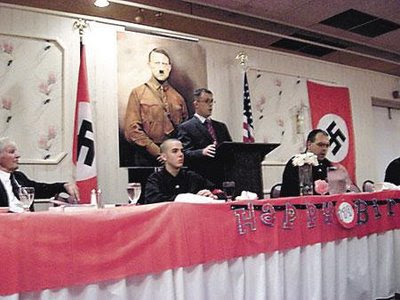 Much to my surprise, I got a prompt response from some Grand Muckey-muck with the American Nazi Party telling me that I was a Northern-Liberal-WhiteGuiltAfflicted-Jewboy, etc. etc. etc. I can't give you an exact quote because I deleted his ass faster than you can say Achtung, Baby.

The fact is though, that was an aberration. For better or worse, what I write here rarely causes a visceral reaction. I mean really, how many people get overly bent out of shape about Grocery Store Baggers, or my disdain for Jeffery Deaver's knowledge of film production, or even experimentation with Stinky Tofu. Sure, this stuff gets me frothy, but the reaction it provokes is usually finger pointing and giggling at the silly man. I can live with that.

And what utterly inconsequential issue has got me obsessed this morning? Optimum Fucking Online! For those of you who don't live in their service area, Optimum is an internet and cable and phone provider in NY, NJ and CT. I have no idea whether or not they provide a decent service. For all I know, they're the Mother Theresa, Greenpeace, PETA, American Heart Association, Easter Seals, and Jerry's Kids of Internet Service Providers.* They may be the best Internet Service Provider in the whole wide world. This is immaterial. What matters is that they annoy me.

Why? A couple of reasons. The first is that they are the Official Sponsor of Daytime Television on every single damned channel in my viewing area.** Their commercials get more airtime than every derivative of Law & Order including every cable and local syndicated version. That's a lot of airtime. Second, their commercials are jaw droppingly stupid (some say offensive), and earwormy in a way that makes you want to destroy that massive HD TV you just dropped six months of grocery money on.

Anyway, these commercials have been airing and annoying me for a year or more, and up to now, I've managed to ignore them to the best of my ability. I cringed when they were on and then I got over it. Their latest spot not only pisses me off at them, it offers stupid people all over the Tri-State Area a really good idea for how to annoy me further. Watch this:

Here's what gets me. It starts with Uber nerd pretending to turn on his camera and saying to the lens, "Hey Optimum. Check out my commercial." We're supposed to believe that some Optimum customer is so fucking in love with their service that he made his own commercial for them. I suppose the cheesy animated crap (and the use of his pretend girlfriend), is supposed to make us think he really could have come up with it. And then it ends with the pretend girlfriend pretending to walk in on him with an "Oh, my guy" expression. I assume this is supposed to be like having Mom walk in on the Tweeners' slumber party and embarrassing them while they jump on the bed and emulate Hannah Montana with their hairbrush microphones.

And here's the part that's got me losing it. This commercial is nothing but a nefarious plot to get stupid people with too much time on their hands*** to take this thing viral. Their genius Ad Agency said, "Hey, we'll get bazillions of your customers to make their own commercials for you and that'll prove that everyone loves you and you won't have to pay anyone (except us), for your commercials and you'll save a fortune and you'll make a fortune and would you like some more fizzy water and biscotti?" So far, nobody seems to have taken them up on the idea. This makes me hopeful for civilization.

P.S. If I've ticked off any Mensa members, I'm going to humbly suggest that you learn how to use the internet before you tell me off. Responding to me one of my commenters blogs (as one such exemplar of the breed recently did elsewhere) is not likely to impress anyone. Just a suggestion.
-----------------------------------------------------
*It's actually kind of hard to come up with a list of organizations that are universally adored...you try. So if any of you want to point out anything nefarious about my list, feel free to not bother. We'll both be happier.

**Anyone who wants to point out that I could turn off the TV may also feel free to not bother. Or that I should leave the house. Or any other constructive advice you may have to offer. Please see above.

***The irony of me having the time to post about this is not lost on me, thank you very much.

****Those who know me wouldn't necessarily classify me as a particularly dangerous person, but I know people and I'm not afraid to call them.
Posted by Nathan at 10:08 AM

We are Mensa, therefor your argument is invalid.

Have a nice day, stupid.

Hey, I resemble that paragraph about attracting the crazies. And I'm totally stealing your troll classification system, by the way.

Because you are my Fearless Leader.

It's actually kind of hard to come up with a list of organizations that are universally adored...you try.

I hate that fuckin Universal Kitten Lovers Association of America! Who do they think they are trying to take over from the well-known and much beloved Universal Cat Lovers of America (UCLA), huh? Kittens are cats, too. But they want some special kind of attention given to kittens that isn't already given to cats, and I tell you, that's just wrong! Every time I see those silly UKLAA commercials (you know, the ones with the kitten playing the ukelele, and talking, like kittens magically know how to talk but then lose that ability when they grow up to be cats) I want to change channels at the very least, but they put their commercials on all channels at the same time, so I can't even get away from them that way! It's a massive conspiracy against me specifically, and all the rest of you, too, even though you don't know about it.

Rise up, world, and tell the UKLAA that they can't treat us like that! Our dignity as a nation is at stake, and I for one won't stand still for it!

It could be worse

It could be a Dominos commercial touting super duper fast delivery and helpful employees, and it announced the "Dominos of the Year" award was awarded to your local Dominos for it's extra special excellent service, which means all the employees are getting executive-size bonuses.

Chris, nah, Chang who is not Chang (and some of you know whom I'm talking about) just annoys the crap out of me.

And yeah, didn't these marketing geniuses find out that faking viral marketing brings about a major backlash (because people like to do viral marketing, but when they figure out they've been had by professionals, they get real pissy). My guess is that they will. Soon. So very soon.

Chang who is not Chang (and some of you know whom I'm talking about) just annoys the crap out of me.

I thought it was just me.

It's not like he was there to refute something. I'm not sure the law applies. OTOH, if Steve said C(w.i.n.c.) was a Nazi, then you'd have something.

For the record, I've never been annoyed by him.

Which means you owe everyone who called you on it.

Now show pictures of your cats.