Mommy-eeeeeee! The Big Kids Are Picking On Me.

A couple of days ago, "D" of Dollygrippery posted about his hate/hate relationship with layout board. For those of you who are uninitiated, layout board is a fiberboard product that comes in 1/8" thick by 4' by 8' sheets. Think of it as really dense cardboard. It's used to protect floors and walls from being gouged or gettin dirty from all of the equipment we haul around everywhere. Depending on where you are in the country, it can be a few different people's jobs to deal with the stuff.

In L.A., there are companies who do pretty much nothing but deal with the layout board for productions. Here's a guy (I've chopped off his name), who has almost 80 credits for doing "layout board". I guess someone's got to do everything, but talk about being removed from the glamor. (Can you just imagine having Christian Bale launch into a tirade at the poor layout board guys? "You and I are done professionally!") 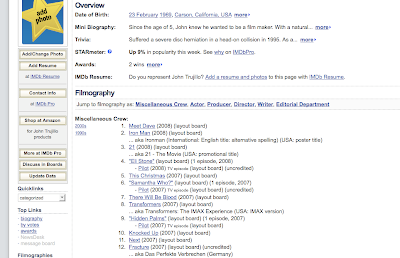 Regardless of who has to deal with it (and regardless of the fact that it has its necessary applications), the stuff is a flat-out pain in the ass. It's unwieldy and wants to bend every whichwhay when you're carrying it. It's a lot heavier than you expect it to be. It's a bitch to cut and you're always at risk of slicing a finger off when you're trying to work with it. And it's A.) always having to be moved out of the shot and B.) never replaced in time to protect the floor from that Mambo Stand that needs to be in that corner, right fucking NOW!

Other than to to agree with "D" that most every type of wheels we have on dollies and stands, won't leave a mark on your lovely wood, carpet or marble floors unless they're dirty or greasy, I'm not about to continue the whole layout board discussion here. No, I want to address something else that became apparent in the comments section, namely that Location Managers get blamed for a lot of shit. I feel singled out here. (Not really. I've got a pretty thick skin and I don't think I'm often guilty of what they were complaining about, but it gave me a cutesy idea for how to start off this post, so I'm blaming "D" and his readers anyway.)

Basically, the gist of some of the comments was that Location Managers sometimes forget that the whole purpose of a location is to be somewhere they can get a movie made, massive crew, truckloads of equipment and all. To be more plain about it, some crews feel like they're getting fucked over by Location Managers a little too often. Fine. Go ahead and feel that way. But turnabout is fair play. I've had more than my share of crews fucking me over.

That room we're not touching.

On one show, we took over a house for 30 days of shooting. After multiple scouts, it was decided that there were two rooms in the house that we never needed to shoot in and we didn't need them for staging areas or video village. These two rooms were to be locked up and sealed off and be the only two spaces in the house we wouldn't need to concern ourselves with restoring. With only a couple of days shooting in the house remaining, the A.D. came to me and mentioned that we owed an insert shot. (An insert is a closeup of a hand or face or whatever and there is very little background that will be seen.) She wanted to know if we could do it in one of those two rooms since it would only need a few crew members and just a table for background. I said, "O.K., but let's please get in and out of there with a minimum of fuss."

Ten minutes after they started setting up, I discovered that someone had sliced off two feet of carpet so the door could be closed when the cable was run under it. D'oh!

The 6" diameter vent stack in exactly the wrong 6" space.

On another job, we had a crew of construction grips build a platform on a rooftop. The platform was a massive undertaking, ultimately covering about 40' by 50' of rooftop and solid enough to support a ton or two worth of camera crane. Now, the geometry of camera cranes is both interesting and complicated. If you want to have the lens precisely at position "A", there is a 360º circle around that point where the base of the crane can be. Obviously, not every position for the base is feasible because of surface conditions and some other positions place the base squarely in the shot you want to get. Factor in the fact that position "A" is probably only where the lens will be at the beginning of the shot. The lens may boom up or down. It may pan left or right. The arm may be swinging one way or another. And the base may need to move during the shot. All of these things taken together mean that there really aren't many choices about how to position the crane to get the shot.

This particular platform meant that the crane base could be placed anywhere within that 40' by 50' space except the one spot they had left a hole to accommodate a 6" vent stack coming out of the roof of the building. And that wasn't a problem...until the director created a shot that required one wheel of the crane base to be precisely where the vent stack was. The grips come to me and ask if they can cut the vent stack and cover it with the platform. I ask the property owner. I don't remember the details exactly, but the property owner didn't want the vent stack cut. (Some silly thing about trapping the smell of sewage in 20 or so apartments or some such nonsense.) I delivered the news to the grip that we'd have to work around it. He said O.K. I left the roof to deal with something else.

When I returned half an hour later, the platform covered its entire space with no sign of a vent stack anywhere. Lot's of innocent "who me?" glances met my arrival. The building owner was not pleased.

It's really common on a tech scout to have the gaffer point out a bunch of rooftops and fire escapes and tell me they'd like to put lights on them for a shot. We do our best and line up as many of them as possible. To do this, we're usually dealing with both a tenant (because the fire escape is right outside their window) and the building owner ('cause it's his damned building). I wish I could count the number of times we had permission to be on the roof of one building and someone decided the light would work better from the roof next door. From their point of view, it's moving the light 30' to the left and hoisting it over a 10" parapet wall. From my point of view, it's a roof owned by some guy I don't know from a hole in the wall.

The cast gets in on the act.

I was working on one movie that had lots of thuggy characters shooting guns at each other in every other scene. Yay! Fun stuff.

One morning, I popped into the Church Basement we were using for the cast to hang out in and found them all smoking pot and showing off their guns to each other. First, I radioed the A.D. and asked him to deal with the pot smoking in the church basement. Then I radioed the Prop Master and asked if there was any reason the prop guns had been handed out before the cast was on set. He reminded me that we didn't actually have any weapons on set that day and all of them were locked up in his gun safe back at his shop.

I left that for the A.D. to deal with as well.

Actually, now that I look back on this and a bunch of other stuff I didn't bother including, I'm thinking some crew in my future is going to get the short end of the stick just on principle.
Posted by Nathan at 4:29 PM

Excellent post. Personally, I love those layout board companies. We used to have to rely on production assistants to put that stuff down -- and PA's already have their hands full at the beginning of any shoot day, so half the time we'd end up helping them just so we could run our cable and lights into the building. When the production company contracts the job out, by the time we get there, the entire house/building has been securely boarded and taped.

That's the good side of layout board -- the bad side is using it on stage. Sit com sets have extremely flimsy floor veneer that the wheels of our man-lifts chew up in a matter of minutes, so we have to put layout board down before going in to light a set. Even when it's taped down, the stuff buckles under the drive/steering wheels of those heavy lifts, which triggers a safety lock that prevents the lift from ascending. At that point, either we need someone on the floor to override the safety lock or else spend five minutes backing-and-forthing in an effort to find a spot flat enough to ascend, at which point the drive wheels will take us in where we need to go. I can't count the man-hours I've wasted dealing with this crap.

I make a point of cooperating with location managers as much as possible, and they usually appreciate that. Their's is a tough job nobody else appreciates until they really do have to put a big lamp on the next house over -- the one we didn't specify on the scout. That's when the location manager really earns his/her money, and many times I've had my ass saved my ass by a location manager who was able to open a door previously off limits.

What an absurd business...

I wasn't talking about the guys who get there, look at the lights and then go "Oops, guess it needs to be on the next roof." Usually they come to me and ask me to get permission.

The ones I was talking about are the ones who just move the light across the roofs without bothering to ask anyone (and yes it's happened a few times).