A bunch of you guys have been posting pictures of your younger selves. Unfortunately, I have a distinct lack of access to most of those pictures and almost none of them in a digital format (Hey, big sister, send me some of those pics you had scanned, huh?) I did however remember that I have this most flattering photo of my 17 year old self...in an expired passport. 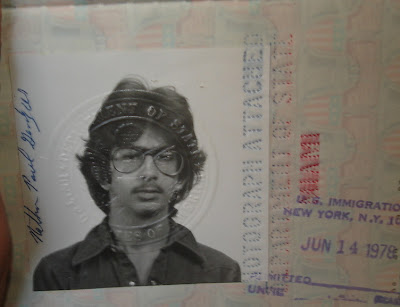 Allow me to answer some questions before you bother to ask them.

- The top scientists in the late 70's believed that humans were evolving so that their cheeks would be able to assist their eyes with vision. Yes, it was necessary to own glasses that covered a maximum square yardage on your face.

- I had, in fact had a recent haircut...the first one since I was 12 years old. Merely weeks before this photo was taken, my hair reached the middle of my back.

I kind of miss the days when I could look out from any part of my glasses and be able to focus. None of that targetting nonsense to get the optimal spot over where my eyes are supposed to be. (Of course, I might just be saying that because my current ones are a bit off, and it's annoying, but I'm also too lazy to get them adjusted...)

Well, it's a well know fact that the 70s was a horrible decade for pictures. Just like the camera puts on 10lbs. And yeah, I miss stylish big glasses, instead of the German Proctologist glasses I have now.

I wish I had my old archives available to pictorially prove that, but some ten years later than the time of your picture, I looked exactly the same, hair, glasses and mustashe... Which kind of makes sense - our 80's were your 70's...

Oh, I've got a passport photo to beat that one. I'll see if I can scan it.

It was taken as a replacement for a stolen one at the US Embassy in Moscow after having spent a 12-hour trip hiding in the toilet of a Soviet train. o.O

And then there was the paisley...


If you guys need me, I'll be hiding under the bed

John, my uncle's second wife *still* has hair that looks like Farrah.

Better mustache than I had at 17.