It's Official. The Saturday Multi-Post Is A Thing.

The Saturday Multi-Post is officially a tradition. Whether I've called it that or not, this will be the fifth or sixth edition. As with all things Polybloggimous-y (you are hereby invited to suggest alternate coinages for the word that makes Polybloggimous into an adjective)(which I realize upon proofing this entry that Polybloggimous is already an adjective, so never mind), I make no promises. In other words, if I miss a Saturday, don't be surprised or disappointed. (Note how I presume that any entries here, much less Saturday entries, are important to your life. It's my delusion and I'm sticking to it.) Some Saturday in the future, I might go completely nuts and post Multiple Multi-Posts. Hey, you never know.

I just love watching news coverage of hurricanes. The camera is rock steady because the cameraman is lashed to a telephone pole or some-such and he's positioned behind some natural or improvised windbreak. The reporter is in the bit of wind tunnel he's deterimined is windy enough to show that this is a dangerous storm, but not so windy that he'll be blown away. Invariably, at least one guy gets it wrong and we get hilarious footage of a reporter tumbling down the street trying to grab a tree or streetlight...anything to get control. Or somethimes, he's standing there talking and you get to see the sign from the pharmacy in the next county finally come to a sudden stop as it gives him a full body slam.

And, no! Don't start throwing sexist labels at me. I think it's just as funny when the reporter is a woman.

How do I get on this thing? Do I really want to? Who decides what's a Blog of Note?

Nathan Bransford is there and I read him every once in a while. He's got a good blog. I bet some of you have been there before. Clever Girl Goes Blog looks well done. I'm not sure it's something I'd read regularly, but I can totally get the idea of Blogs of Note trying to target a wide audience. It doesn't have to be all for me. No, the issue I take with that blog is that a brief perusal reveals that it's updated on a fairly irregular basis. Shouldn't a Blog of Note, have lots of regularly posted new content?

Another thing that may keep me off the Blogs of Note is the fact that frankly, every once in a while, my fucking potty mouth takes control of my brain and fingertips and causes my language to turn suddenly to shit. Stupid Family Friendly Filters.

My next door neighbor rang my bell a few moments ago. He's got the guys from the cable company doing some work. If you live in Brownstone Brooklyn, odds are you don't have an alley behind your house. Our backyards all directly abut each other and we share fences most of the time. On one side our our backyard, there's only our fence. On the back end of the yard and on the south side, our fence is right up against the neighbor's fence. It's a hodgepodge. This picture kinda illustrates what I'm talking about. (courtesy of HFTV's Gardening Page.) 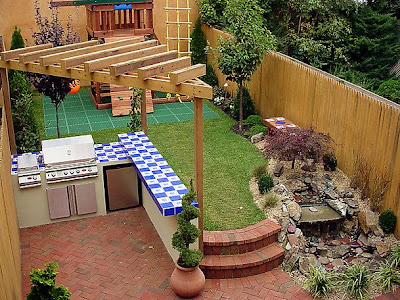 And no! Don't expect me to comment on whether or not ours is more like the before or the after. You'll get nothing from me.

Anyway, when the phone company or the cable company or any other utility shows up to work on above ground lines that traverse our various backyards, it turns into a series of doorbell ringings to ask, "Do you mind if these guys climb your fence? They've got to run a line to the pole five houses down." So, of course, being a neighborly guy (not to mention the fact that I'm pretty sure all of those utilities have some kind of easement anyway), I say "Sure, knock your brains out." So, a few minutes later, I'm standing in the backyard talking to the Carribean Sounding CableGuy over the fence and he's deciding where he should come over the fence and I say, "Wouldn't it be easier to just walk through our house?" And he says, "Yeah, you don't mind?" "Not at all", I say.

Time has elapsed: The CableGuys are finished in our yard, Turns out the boss (the same guy I'd been speaking to over the fence), is a Renaissance CableGuy. First of all, he could identify every plant in our yard, knew which to be careful of and even knew about the weed with the purple berries that you can never wash off your shirt. Then he started speaking to my neighbor in Spanish. One of his assistants say, "I didn't know you speak Spanish." He replies, "I speak a little of every language I can get my hands on." Then he proceeds to rattle off a bunch of stuff in Italian, Chinese, Polish Russian and another language I didn't recognize at all. Is it possible John the Scientist just visited me incognito as a Carribean Renaissance CableGuy?

I was just out running around the neighborhood and I picked up a couple of brownies from the bakery for dessert. Then I decided we had plenty of dessert in the house and these brownies had snack written all over them. So I stopped into the cute little coffee shop practically across the street from my house.

Me: Can I have two medium coffees, please?

Girl behind the counter: ::smiles brightly:: Sorry, we're out of coffee right now.

I'd probably pay good money to see a reporter go tumbling down the street.

Good God, Cindi, in case you missed it, it was Heraldo Rivera who took the tumble into the (literally) sewage-infested waters on Galveston island yesterday. I mean, is Karma working overtime, or what?

I love me some mail that doesn't go missing in Tau Ceti.

Because I can't imagine the IGPS (Inter-Galactic Postal Service) is going to be any more efficient than the USPS.

Let me know how you like the jam and apple butter!

And GF found Warm Hearts, Warm Babies in your neck of the woods. They'll be getting some nifty little teenie-tiny hats in your name. Yay Janiece!

The apple butter was absolutely deeeelish!!
Most excellent. A big thank you.

I tried to order pizza at Pizza Hut once and the girl behind the counter said "Okay, one medium pepperoni and mushroom. We're out of cheese right now, is that okay?"

Cheese. They were out of CHEESE!!! but she was still going to sell me a pizza. With no cheese. Is that okay?

welcome to the blog. If you want pizza stories, search my site for Dominoes. Actually, if you Google Dominoes Pizza Tracker, I think I'm still on the first page.

"Dominoes needs to rot in hell" will definitely get you to the pizza story from...well, hell.