How Many Alternate Titles Can You Come Up With For Various & Sundry?

I think it was over on the Whatever where there was a recent discussion about recognizing famous and semi-famous people in public. I commented that I rarely recognize anyone out of context. I'm not usually looking for famous people in public and I rarely notice them if I walk by them. GF has a unique way of 'running into' famous people...she has a list of famous people she's almost run down in her car. They include Paul Shaffer, Conan O'Brien, Naomi Campbell, Monica Lewinski and Martha Stewart twice!

So yesterday, I'm stopped at the light at 59th Street and Park Avenue, and who should cross the street directly in front of me...not 10 away? Some hot young engenue? Not so much. My brilliant celebrity-spotting was Larry fucking King. Gawd, is that man creepy-scary looking. He looks like he's wearing shoulder pads.

Also, on the location scouting front, I think somebody once asked how we find the houses we're looking for and I answered that we just drive to likely neighborhoods and then start knocking on doors and/or leaving letters telling the owner that we'd like to scout their house and to call us if they're interested. Well the show I'm working on now is a show where they interview NYPD detectives about interesting cases they've had in the past and then re-create portions of what happened. The producer called me today and gave me an address in Staten Island that I should go check out. It seems that it was a crack house back in the 80's and one of the cops has an interesting story about a bust they did there once. So, I went to said address...and proceeded to shoot a few shots from the street without getting out of the car.

To be honest, the photos don't do the block justice. It's a really scary looking block when you're there in person. 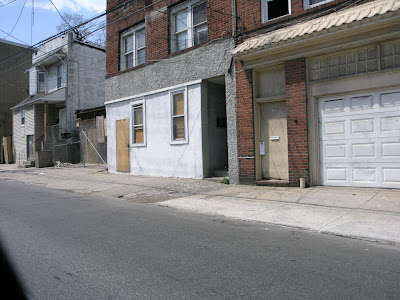 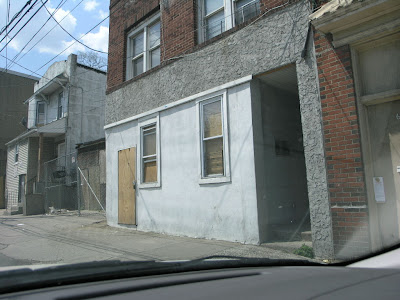 Me: Well the good news is that the house is still there and the block is every bit as skeevy as you'd want it to be.

Producer: Was there anybody home?

Me: That's the bad news. The front door is boarded up and there's no fucking way I'm wandering around that house and back alley by myself.

Yeah...just call me Super-Wuss. (I'll track down who the owner is and arrange to meet them there.)

Check back here some time after 8:00pm EST to see pictures of the lovely lamb chops I'm going to grill in a little while. 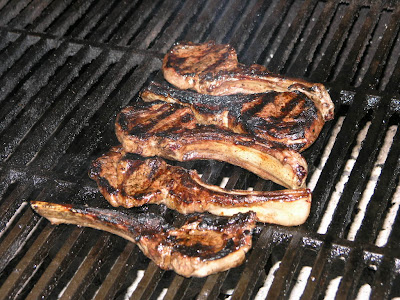 And for a bonus...last night's skirt steak. (The foil contains fresh string beans with sliced tomatoes and mushrooms.) It was all delicious. (And no I don't take pictures of dinner every night. I needed this picture for one of the threads on the 'e'.) 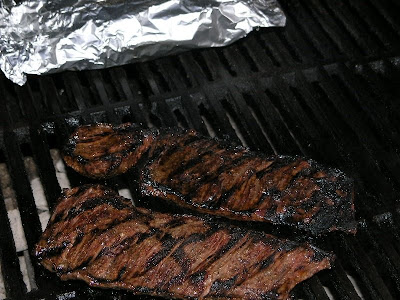 Michelle, I really mean it when I say the pictures don't do it justice. You turn a corner from a perfectly fine street (in spite of being relatively low income), and then you're on this street that just says, "lock the doors, roll up the windows and don't stop for red lights".

You're not a wuss Nathan. I wouldn't have set foot outside my car in that neighborhood, let alone gone wandering around. Creepy...

I agree about the skeevy neighborhood. Even walking thru downtown Seattle to the ferry, it's all pretty yuppie upscale. I'm so spoiled! :P

One of the entertaining things about having teenagers is when I download my digital camera to my computer and find a stack of pictures that I did not take. (No, get your mind out of the gutter.) Last time, it was a dozen pictures of a pot of boiling eggs. When I asked my son why... he said, "Can't you see that they're arranged like a smiley face?" Huh. Art photography at its finest.

So, you're not the only one who takes pics of your dinner. ;)

Better than some neighborhoods I saw in Iraq, worse than some too.

Being a rural Alaskan, cities creep me in the best of times, I'm always on edge and probably would be even on Fifth Ave ;)


The lamb chops, on the other hand look fantastic. I've got some lamb in the freezer, maybe I'll make Irish stew tonight.