I told you our kittens are defective. Well Teufel is really weird. I mentioned that he'd magically grown his balls back after the ASPCA swears he's fixed. Well, I also think he's a bit younger than they said (about 10 weeks by now). He still wants to nurse. He tries to nurse from the other kitten. When doing this, he chews off the fuzz growing back from her fixing procedure. He tried to nurse on GF's ear. This morning he tried to nurse on my belly. We'll be happy when this behavior is over. LuLu, on the other hand, prefers to sit on our shoulders. And even though it's adorable, it's not adorable every freakin' minute of the day! And she's agile...here, look. 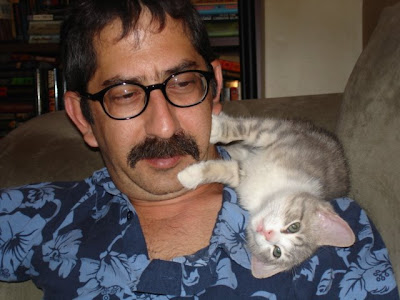 Here's something that's kind of neat (at least I think so). The company I'm working for at the moment has their office in the Starrett-Lehigh Building. This was originally a Freight Distribution building with a railroad as its ground floor tenant. And it's huge! It occupies the entire block between 26th and 27th Streets between 11th Avenue and the West Side Highway. And it's 18 stories tall. So, what's so cool? Below, you can see one of the loading docks and the freight elevators. Well, what's so cool about a loading dock? This one is on the 17th floor! That's right. You can drive a truck into the freight elevator, send it up to the 17th floor and let it sit there unloading right on the floor it's delivering to. They knew how to build some Macho-Assed buildings in the 30's. 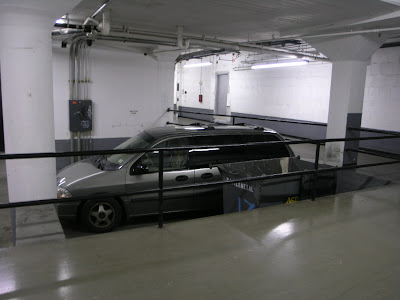 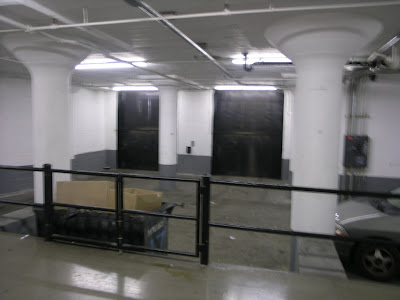 And Item the Third.

It's Fleet Week in New York. Below, is a shot of the USS Kearsarge (LHD 3). (The web site will ask you for a username and password, but just hit 'cancel' and it'll let you navigate the site.)

Kearsarge, (named for Kearsarge Mountain in New Hampshire), is an Amphibious Assault ship with a crew of 77 Officers, 1,100 Sailors and 2,000 Marines. It's the fourth ship of it's name (dating back to the Civil War era sloop that defeated the CSS Alabama), and is one of only two United States ship names mandated by congress to be used more than once. (I'm not sure what the other one is but I'm sure somebody will tell me.) It's the biggest ship they brought to town this year (and the only one I had time to get a shot of). Go look at some of the pics on their website. The Amphibious landing craft are especially cool. One of the other ships in town is the USS Leyte Gulf (CG 55). It's a Ticonderoga class AEGIS Guided Missile Cruiser home-ported in Norfolk VA.

Enjoy the town while you're here Navy Dudes and Dudettes!

Everyone else, have a great weekend! 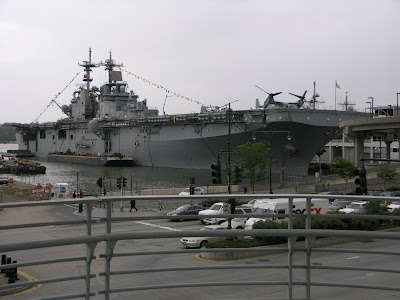 Oh, and I almost forgot. The Anonymous Production Assistant apparently enjoyed our random drive-by the other day. Way to go folks...that was fun. And his blog is really good. You should keep going there.
Posted by Nathan at 8:08 PM

That is an extremely cute cat. Of course, kittens can't help it...