A Hat Full of Random!

I had to put the lining into my jacket today. This does not please me. It's not really all that cold here yet, (especially not by many of your standards), but I've liked it just being a little cool and wearing a light coat. Yesterday, I wore sandals when I went out for my morning bagel. Tonight and tomorrow, there's a chance of light snow. 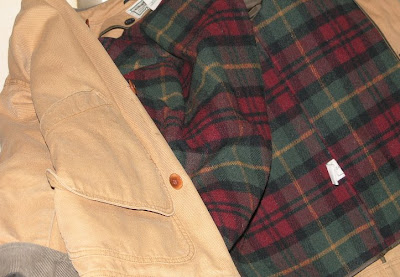 Speaking of going out for my bagel, when I go there on a Sunday morning, there's usually a long line. I always figure I'll outsmart the system by calling my order in before I go up there. I've done this three or four times now. Not once, has my order been ready when I showed up for it. Yesterday, they hadn't even started on it. (In fairness, the first time I called in my order, I actually called it in to their other store in Park Slope.)

In addition to not being pleased about having to put the lining in my coat, I'm really miffed about how early it's getting dark. Sunset at 4:30? This truly sucks and I want something done about it. I'm fairly certain this came up during the recent election and I'm expecting Obama to keep the sun up til at least 6:00 p.m. Maybe an Executive Order or something. And none of that pansy-assed resetting clocks...I want more daylight.

Side Note: I don't think I've ever mentioned that when I got hired to work on Iron Will, one of my first thoughts was, Hey cool. A movie about a dogsled race. It'll be all daylight exteriors...nice short Winter days. Sweeeeeet. Then I got the script and every third page had some crap about "they race through the night." D'oh!

Anyway, the early dark has thrown the Feline Overlords into a tizzy too. The morning ritual remains the same...anyone who sleeps past 4:30 a.m. gets a paw upside the head. There is an alternate tactic that involves claws and toes. The evening ritual is a little more polite. They come in and stare at you beatifically and you imagine this sweet voice saying, "I looooove you". This is followed by them turning downright demanding and saying, "Feed Meeeeeeeee! Feed Me Now!"

Earlier today, I stocked up on kitty food. The dry stuff that comes in a bag went into the cupboard where it's semi-safe. The canned stuff just went onto the kitchen table. I mean it's in cans fer-chrissake. So, I heard this noise a little while ago, and, sure enough, Teufel and LuLu were trying to get the plastic wrapping off the case. 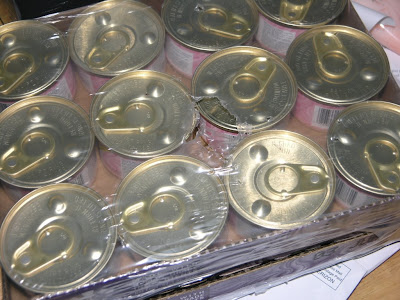 I have no idea what the plan was if they ever got one of the cans free, but I'm pretty impressed that they recognized the cans at all. I mean, hey, we're talking about cats. With apologies to anyone who has, like an actual brain injury, I've always contended that cats are just born that way. How else do you explain how they can be playing with a cat toy for 10 minutes or so, then they leave the room and take a nap, come back a couple of hours later and notice the toy right where they left it. This is followed by a cautious investigation and culminates in the cat looking at you ecstatically and clearly thinking, "HEY, WHEN DID WE GET A CAT TOY?" before pouncing.

What else can I randomly babble about? Yesterday's haul of new visitors came to eight additional visits and even a 2nd shout-out. Yay for International Bloggy Love. Man, Blogger's gonna be pissed at me for using up all of their bandwidth.

I also ran across this story today. The short version is this...Richard J. Peltz has dropped a lawsuit against The University of Arkansas, Little Rock and a student group after the University launched an investigation and came out with a statement agreeing that Peltz had done nothing racist or inappropriate.

One of the examples of his alleged racial insensitivity was that he used an article on the death of Rosa Parks from The Onion to prompt class discussion. The black students’ memo called The Onion “a conservative based medium that uses satire” and said that the article “poked fun at the contribution Rosa Parks made” to the civil rights movement. As Peltz has noted, The Onion is not seen by most people as conservative and in fact regularly makes fun of conservatives (as well as liberals), and the article in question appears to mock, not Parks, but Republicans who think that racial discrimination is all in the past.

As various accusations circulated about Peltz, the law school didn’t say that hs was in the wrong, but it didn’t say he was being unfairly accused, either — and it prevented him from teaching constitutional law or other required courses, relegating him to electives. The statement from the university that Peltz said made him comfortable dropping the suit reviewed the various charges and said that there was no basis for calling Peltz racist. “With reference to any charge of racism levied against you, there is no evidence that you are or have been a racist or acted in a racist fashion during your employment at the law school,” said the statement, signed by John DiPippa, interim dean of the law school, and Joel E. Anderson, chancellor of the university.

Another complaint against him was that he handed out a "basic grammar worksheet" to the entire class which was somehow seen as racist.

This episode seems to be on its way to culminating the way it should, but it makes you wonder why anybody would want to teach anywhere in the first place. Students are, by definition, ignorant although hopefully less so by the time they're studying Constitutional Law. If a Professor's attempts to relieve his students of their ignorance is seen as singling out individuals or groups then he's facing a steep uphill battle.

I'm going to leave off here. I've kept the kitties waiting long enough. Even Widget's getting into the act now and she's usually the patient stoic one.
Posted by Nathan at 5:30 PM

I hadn't heard about the Peltz story. ::Head::Palm:: The stupid, it burns.

Careful. Did you attribute me for that Random?!

I just switched from jacket to light winter coat, only to find out that the zipper is broken. But that's ok. Temperatures here are only in the 30s. It's not really cold yet. I have another coat for that.