The "Write Me A Headline" Contest

Matt points out that I published this without a headline. I usually write the headline first, but couldn't think of one when I started. I figured something in the post would suggest one, and then I totally forgot to write one. (Also, I started writing this last night and I forgot to adjust the "post date and time" when I published it.)

So, you get a contest. Whoever suggests the best Headline for this wins a lovely Panavision Ballcap. 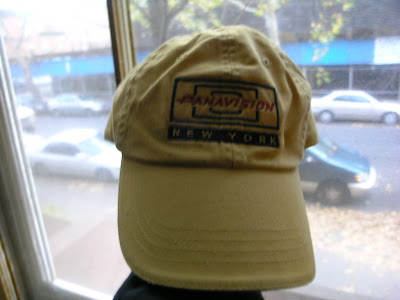 This cap was part of the wrap loot from "Marker" which is the Steven Seagal movie I worked on that was eventually released as "Pistol Whipped". 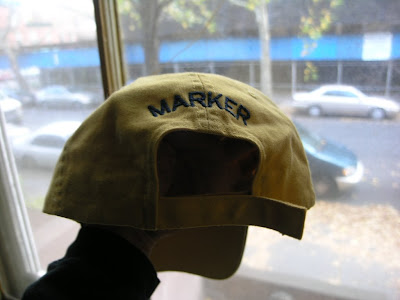 I've mentioned that my first job in film was working at a Rental House for lighting and grip equipment. My usual job was pulling orders of lights and cables and stands and flags and scrims and spare bulbs and you name it. The job consisted mostly of loading trucks with heavy, dirty equipment. We also built a lot of our own equipment. Equipment has changed quite a bit in the last 20 - 30 years. Banks of fluorescent lighting are common as dirt now . In the early 80's, no one was manufacturing them, so we built them ourselves. The ones we built had eight two-foot tubes. They actually functioned really well, but between the steel bale and yoke (the thing that mounts them to the stand), and the fact that we made the case out of plywood, these suckers were heavy. That's O.K. Lots of equipment used to be heavy. Today's fluorescent banks measure in ounces, not pounds.

We had some old Mole-Richardson "Heavy Head" arc lights. These were made of iron and were just unimaginably heavy. You should also be aware that the old carbon arc lights were just that. Inside this head, and behind the fresnel lens, were two carbon rods, going off like a welder's torch and some schlub had to be on a ladder behind the light turning a wheel a small increment every minute or so to keep the gap between the two rods close enough to continue to arc.

So, I guess what I'm saying here is that once upon a time in the film biz, a lot of jobs had a lot more to do with brawn than anything else. Lifting an arc was always a two-man job, sometimes three. I totally remember having to be rescued while trying to lift my end of one of those mothers onto a tailgate...much less over our heads onto a stand.

All of this is leading up to my move to NY in 1986. Oh, c'mon, that totally goes with the flow of the story; please try to keep up! When I was in Boston, it was a union town, but the union was NABET (Natl. Assoc. of Broadcast Engineers and Technicians). Nobody in NABET gave me any shit over touching a piece of equipment. They called our company if somethingt broke down and if I could rebuild it or rewire it, it was all good. (Moment of truth: our shit broke down a lot. We bought a lot of our gear second hand and those fluorescent banks we built had a 32-pin connector to power them. You try connecting that many contacts correctly and securely.)

At any rate, nobody in Boston at the time thought twice about seeing me handle gear on a set.

When I announced that I was moving to NY, all of my friends took turns taking me aside to clue me in that NY was an I.A.T.S.E. town. I was warned repeatedly that as a P.A....I'd be eaten for lunch if I dared place hands on a piece of equipment. It just wasn't done.

In the years since I moved here, there have been a great many innovations in lightweight equipment (and I have no inclination to touch the stuff anymore anyway). Most of the guys hauling cable and pushing dollies went to college and majored in film...or archeology...or philosophy. Make assumptions at your own risk. But when I arrived in NY in 1986, the gear was still heavy and the guys were still all about the brawn. (Nobody's figured out how to make a 25 lb. sandbag weigh 5 lbs. yet, but I hear they're working on it.)

One of my first jobs in NY was as a P.A. on a commercial shooting in a studio near Grand Central Terminal. I'd been recommended for the job by a friend, but I didn't know a soul on the job. To be perfectly honest, I'd spent a lot of time one step removed from sets, but practically zero time on sets. And I was fairly clueless as to what I was supposed to do. But thanks to my friends in Boston, I knew exactly what not to do...don't touch the equipment.

So, fairly early in this day, I was standing in a corner trying to take it all in and figure out some way to be useful, (indespensable if I could figure out a way to swing it), and what do I see? One of the grips is pushing the McAlister Dolly onto the set.

Let's take a brief moment to talk about the McAlister Dolly. Prior to the invention of the McAlister Dolly, camera dollies were absolute behemoths. One guy had to push the thing. Someone else turned a wheel that steered it. Yet another person tuned a wheel that made the camera go up or down on the boom. The McAlister Dolly could be controlled by one person; all of the controls were reachable from the pushing position. But it was still made out of extremely heavy metal. Here, take a look. 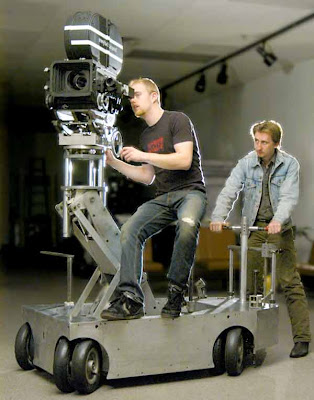 Photo courtesy of these guys with more photos on the link.
I won't go so far as to say that being a dolly grip in those days was all about brawn...he had to be able to do a delicate dance...pushing the thing at the right speed, twisting the knob to raise the camera, switching the steering mode and stopping the dolly on the correct mark. But before you could even be considered to do all of those things, you had to be capable of getting the damned thing moving at all. Between the dolly itself, the camera, the camera operator and, at least one Assistant cameraman, you could easily be pushing 1000 lbs. So, one of the job requirements was that you be a beefy guy. It was a battle with inertia.

O.K. let's not sugarcoat it. The dude I saw pushing the dolly onto the stage had a beer belly the size of Oklahoma, a stained T-shirt that didn't conceal all of his nether regions and a chewed up unlit cigar in his mouth. He was...scary looking to this 26 year old naif who had only been warned about how severely I could suffer if I dared tread on any I.A. crew member's turf. Unfortunately, at precisely the moment I looked over and noticed his arrival on the stage, he was encountering a roadblock; one of the many pieces of feeder cable snaking around the stage was blocking his path. I'm not shitting you when I tell you that this paragon of intellect walked over, lifted the cable into the air and then looked back at the dolly...seemingly wondering why it wasn't moving through the path he'd cleared for it.

He looked at me and jerked his head in a "C'mere" gesture. I did my best "deer in the headlights" impersonation. He jerked his head again, annoyed and emphatic. I walked over to him. He put the cable into my hand. I held it up over my head as he pushed the dolly under it. At some point during this process, one leg of the cable came loose and a light on the other side of the stage...exploded.

This was followed immediately by the Gaffer looking over at me with the cable in my hand and him storming over to ream me a new one. I just stood there and took it. The grip with the dolly never even looked back. I got sent home about six minutes later.

Oddly enough, that company never called me again. On the plus side, I did get my $65 paycheck a month later. Sweeeeeeet.
Posted by Nathan at 10:30 AM

Nathan, what a weighty post. I mean that's really got some heft to it.

I would imagine it's because of all the heavy lifting that you forgot a headline. :) Or maybe you just hit the publish button too soon again :P

Hope your contest works better than mine, I tried to give away a Matrix crew bag. The winner passed (smart move on his part) Maybe the Panavision hat is a better prize.

"Nathan Weighs in on some Heavy Issues in the Filming Biz"

"Nathan's Surefire Method to Pump You Up!"

"What Not to Do While You're on the (Film) Crew"

Yawwwwwwn. I think the cap's still up for grabs.

"Would You Just Hold This For Me Just Like...Oh God No, Not Like That!"

And I don't want a prize.

Things get 'splody for Nathan, with pay!

Grip me this, Batman

A Move, a Grip and a Trip

"And that, Your Honor, was when I snapped."

"One toe over the line" - 'cause you know I love me my music lyric headlines.

Money for nothing, grips for free.

It took me a bit to figure out why they were glowing.

"No, Seriously. Don't Touch The Equipment (in NY)"

That Ain't Heavy, That's My Dolly.

We have some lovely entries. I'm gonna leave the contest open until sometime tomorrow.

And those guys still look like they're glowing/being electrocuted.