The massive outpouring of comments about Part I leads me to believe that I may have bored the crap out of most of you. Tough. I'm gonna post Part II anyway. Before I get to it, I just want to mention a minor scare I got earlier today. While looking at my stats, I noticed a visit from an nyc.gov domain. You'll remember that I expressed mild trepidation that someone from the film office might read yesterday's entry. It turned out to be someone reading one of my posts about Ft. Greene Park. Whew! Of the hook.

So, I left off with the end of the NY exteriors.

The second night of NY shooting involved all of the interior scenes at Grand Central Terminal, including Ricki getting on the train. Trains add their own set of complications to things. Luckily, for the scene of her boarding the train, we were planning to cut as soon as the doors close and we never needed to see the train move. That means that we were able to run cables into the doors we weren't looking at to light the inside of the train. If the train needs to move, you need generators on the train and all the cables need to be safetied and lots of other not fun stuff.

Having said that, that's the only bullet we dodged. If the train in your movie is going from NY to Boston, it's either Amtrak or some anonymous railroad. When you're contacting a railroad to ask them to get involved in your movie, many of them just say No, out of hand. The rest of them are concerned about liability, how their railroad in particular will be portrayed, and how the railroad industry in general will be portrayed. I was not at all surprised that Amtrak didn't want to participate in a movie that is set up by a derailment.

That left us to create an anonymous railroad. And we knew that we'd have to shoot trains in NY using Metro-North equipment and in Toronto using VIA rail equipment. And we'd have to make them look like the same train. We did this by putting sandblast paper on the outside of the cars to make them seem to have a different paint scheme and then we'd just do the same thing when we went back to Toronto. Here's a (bad) screenshot from the movie showing the horrendous clown-car design we settled on for some unfathomable reason. 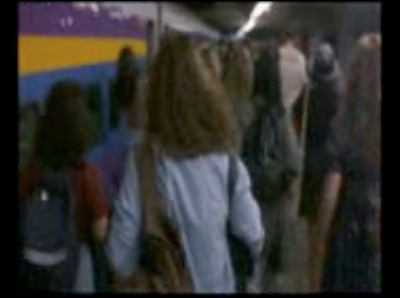 I mention going back to Toronto. When scheduling this movie, it was decided to shoot Toronto first, then all the scenes in the U.S. The reason for this is that if you start in Canada, your cast is working under AFTRA rules except for the end of the movie in the U.S. where SAG takes jurisdiction. If you were to start in the U.S., SAG would have jurisdiction for the duration. That would have been a big difference in costs. The shots of the train flying by in the rain, however, didn't call for any of the cast, so we left that to last and went back for it.

We shot this scene on a pretty dramatic piece of rail in the Don Valley, just east of Toronto. One of the cool things about the location is that in the background, you see the Bloor Street Viaduct crossing over the valley perpendicular to the railroad. And Toronto's subway system has a train that crosses it. It's all quite dramatic looking.

Side note: I mentioned that railroads' first concern is their liability...they don't want any. This scene involved prepping one railroad's equipment in a second railroad's maintenance yard to shoot the scene on a third railroad's line. It ended up being a ridiculously complicated 4-way contract in both English and French. And the liability language could fairly be construed as meaning that if the head of one of the railroads ordered his engineer to drink a quart of rum, then forced him at gunpoint to run us down on the tracks, it would be our fault. As the Location Manager, I'm the one who normally signs location agreements. Occasionally, I'll get a Producer to sign one if I feel like I need to cover my ass. Twice, I've felt it necessary to get the Studio attorney to be the one to sign. Nobody wanted to have their name on this document and it had to go straight to the Chairman of the studio.

Anyway, back to the story. The shot starts high up, looking at a subway train crossing the Viaduct and then cranes down to pick up our train speeding toward us through the rain.

The beginning of the shot: 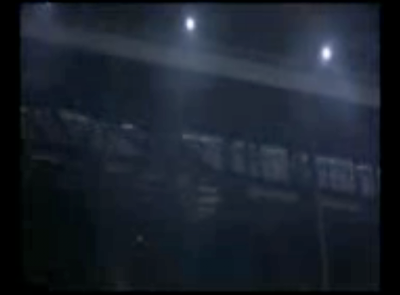 The train speeding toward us: 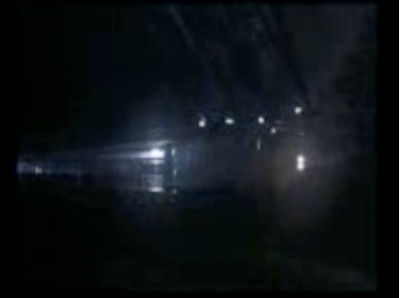 Our Effects guy in Toronto was a genius and the rain looked great and worked exactly as advertised. (I apologize that you can barely see anything; the video I took these shots from on YouTube is really muddy.) He had about a dozen raintowers and spinners on the Viaduct, another bunch along the length of track approaching us, and a rig directly over the camera crane for foreground rain.

Here's where things turned special. Sandblast paper is supposed to peel off really easily...like Post It notes. But to make things easier, in NY, the scenic artists had only peeled the backing from the edges of the paper. They neglected to give that little tip to the Toronto scenics when they sent the paper and info on the color scheme. So, the Toronto scenics removed all of the backing. They were scheduled to show up at the maintenance yard at 8:00 a.m. the next morning to remove the paper and give the train back to its owners. The head scenic expected it to take about 5 hours for him and 3 more guys to clean up the train.

I got a phone call at about 9:30 a.m. to tell me there was a problem. The paper was not coming off. They'd get an edge loose and manage to peel about 2 inches of the stuff before it ripped. He needed more bodies and more equipment and some solvent. And blow dryers. No, better make that heat guns. So, I O.K.'d him hiring 4 more guys and told him to get whatever gear he needed, just get the train cleaned up.

The thing to realize here is that for every hour until we could hand back their train, we were paying for being in the yard. We were paying a rental on the train. And we were paying a four-man crew who had to be there in case the train had to move. Ultimately, it took two full days with 12 scenics working in rotating round-the-clock shifts to get the damned train off of payroll.
Posted by Nathan at 3:59 PM

I can never think of anything substantial to say to these things in response, but I do enjoy reading them quite a lot. ;)

Yes, but in the future, those of us paying attention will make sure it's not us peeling off the whole back of the paper thanks to your story.
:)