On Loot, The Giving and Receiving Of...And Some Other Stuff.

OK, So a couple of days ago, I posted a post without a headline and Matt called me on it and inspired me to have a "Write me a headline" contest. I have now chosen a winning headline, which won't, ya'know, actually become the headline, but we'll all know that it really should be the headline, only I'm too lazy to make the number of changes to that post which would allow it to be the headline and for everything else to still make sense.

And the winner is MattW with "Hey Kid Come Over Here and Hold This and I'll Give You 65 Bucks." So, Matt, soon, you'll have a nifty Panavision cap winging its way to you. (Hint: Check with all my previous contest winners and I think you'll find a concensus that while my prizes all eventually make it to where they should go, I'm a little slow about...getting them in the mail, so I wouldn't hold my breath while anxiously waiting by the mailbox. Go about your business and that way it'll be a nifty surprise when it shows up.)

A package showed up in the mail the other day. First, there was a card in the package.

Embiggen it if you can't read it here. 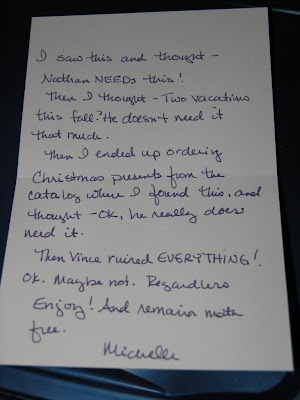 From Michelle: A T-Shirt with message on it. (I decided that the message was the important thing for you to see. The rest of the T-shirt looks like...a T-shirt.) 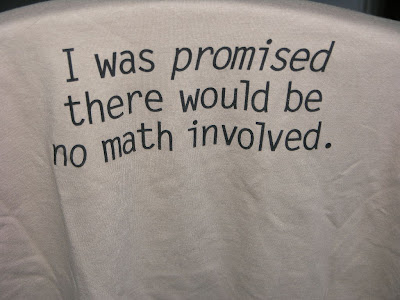 And Some Other Stuff.

A whole bunch of folks were posting sunsets the other day inspired by Scalzi's periodic sky on fire over the cornfield shots. It started with Jim. And soon, MWT ponied up, followed by Anne.
Here's my entry. You should know that if I were to take a ride on the B38 bus and if I were to walk an additional 4 blocks down to the Brooklyn Heights Promenade and if the sky were cooperating, I'd be able to show you a really dramatic unobstructed view of the lower Manhattan Skyline with the sun setting in all it's glory to the south and west of the city.

But I didn't do that. I walked two blocks to the top of the hill in Ft. Greene Park and shot what there was to see.

First, looking essentially northwest. That's the Empire State Bldg. and a couple of stacks at the ConEd plant on Manhattan's east side. 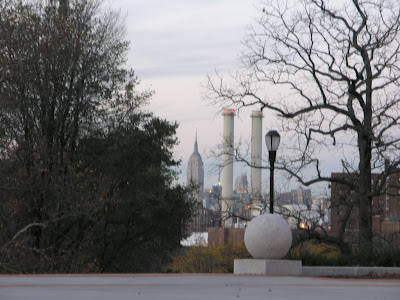 This is looking due north. There's buildings! 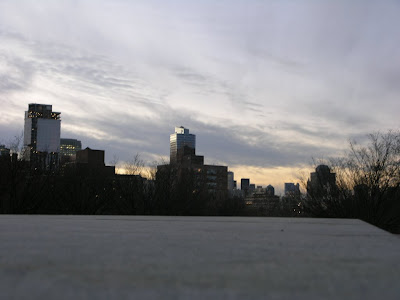 Here's a view to the south. Park benches, a street lamp, trees buildings and totally obstructed sky. Where's my cornfield, mountains or river when I need them? 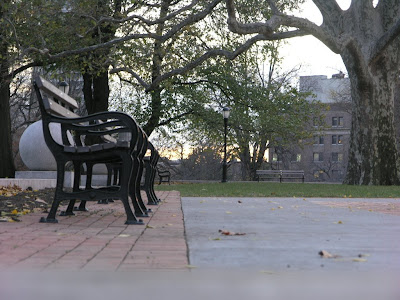 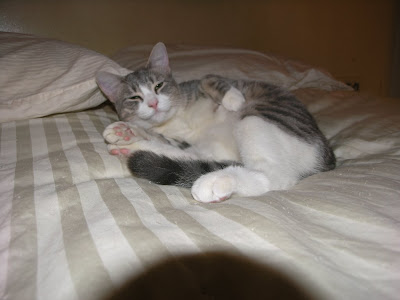 Yes, you do! And as a little added bonus, I'm going to send it with the strap adjusted to fit me. Then you can confirm for everyone else that I have a tiny little pinhead. :D

LuLu has a "Dude, you're harshing my mellow" look going on. Have you noticed your catnip supplies declining faster than expected?

That T-shirt suit you perfectly, Pinhead.

She was pissed because I interrupted her tongue bath.

And Jim posted while I was writing that last comment, so no, I'm not insinuating that Michelle was involved.

Lulu is the one who's tongue bath was interrupted.

Yes, and Michelle wins the internet.
Use it wisely.

Damn. That was supposed to come after the tongue bath comment.

I will use my powers for...

Your sunset has now been linked to the sunset directory. I missed it because your blog post did not have a sunsetty title, sorry!

Let me see - we had four sunsets in the list before, add one, that makes five, five sunsets now! ;)

Well, it's not like it was a particularly good sunset.

A sunset is as a sunset does.