Just a few days ago, Vince alluded to some Machinations. He said,

Plans are in place and coalitions are being collated and soon, very soon, something will arrive at someone’s home. Yes it will. And then there will be snickering and even some evil laughing here.

I still have no idea what coalitions were collated, but I can reveal that there was an arrival at my door yesterday. Yup folks. Knowing my aversion to any forms of math requiring more than my own ten fingers and maybe a toe or two, Vince has sent me the Math Hurts Test Answer T-Shirt.* 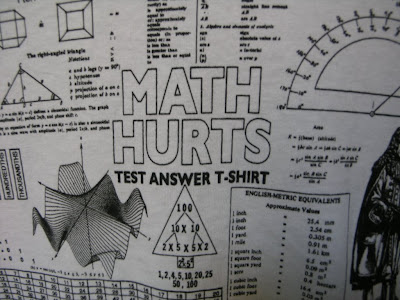 It's covered with charts and diagrams and theorems and calculations and...math-ey stuff. There's a lovely portrait of Leonardo Fibonacci on the back, (and yes I am familiar with him, thank you very much). 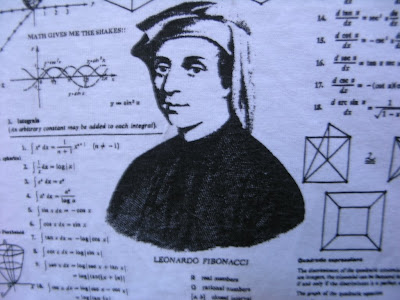 But here's the thing Mr. Vince, Funny-pants, Math torturing, Wilderness-dwelling dude! The joke's on you! See, when I'm wearing it, I can't see it. So hah! Your visions of my head going all 'splodey have been foiled.

*T-Shirt courtesy of this place. Well, the envelope was from them, but interestingly enough, I can't find this particular shirt on their site.
Posted by Nathan at 12:22 PM

I have nothing more to add at this point.

The lighting on that middle picture looks almost like there's a neck coming out of the top of the shirt - but no arms coming out of it or body in it. Kind of eerie, really.

I don't know what that has to do with its mathiness though.

That was faster than I thought it would be. I just figured, you know, that when you were confused, mathematically speaking, why help would be available. Even if you have to remove the shirt and all.

And the shirt did come from the Computer Gear site: http://www.computergear.com/matcribsheet.html

I assure you, if I get confused, the stuff on that shirt is so far beyond my feeble skills that it's not going to be any help.

I stretched the shirt out on the back of a chair, so there's a wooden rail where the neck would be.

Hey, I see some geometry on it! There's a good place for you to start (if you're going to start figuring out what the shirt says at all, that is).

I don't see myself studying it to closely, but geometry was the one part of math that always made sense to me in school. I'm visual like that.

See, the big flaw with that shirt as far as I can tell, is that everything on it should be written upside-down so you can look down at your chest and crib off of it. Or written backwards so that when you go to the bathroom in the middle of the exam you can look at yourself in the mirror and check out the answers to #19 and #28.

I had the exact same thought. Well, that and that it's not terribly covert.