As The Hairball Turns

All I can say is Wow...just Wow! I came home a couple of hours ago to find a package waiting in the mail. It was from Fairbanks, Alaska and it was addressed to Widget and her Trainees. It would appear that Tania's cats, Skulker and Orphelia decided to send Widget, LuLu & Teufel a catnip blanket. And a couple of little plushy toys. And a packet of Alaska-grown catnip, (known the world over as the most potent catnip grown anywhere on Earth).

Does this mean Janiece has to add an entirely new category for UCFer pets interacting behind their owners backs? I think it may. 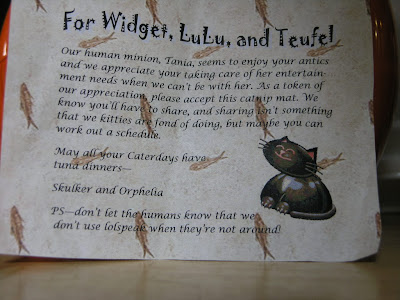 Here's the little beasties enjoying their new toy. (Don't bother with the sound...it's just some guy on PBS nattering away about pearls.) LuLu's acting a little nonchalant, but don't let that fool you. She just doesn't like to act childish on video. Believe me. She just goes batshit as soon as the camera is off.

Thanks Tania! (Uh, I mean Skulker and Orphelia).
Posted by Nathan at 5:02 PM

(That comment was from my three cats, Kitty, Cinnamon, and Fuzzball.)

Vince, I have one in my car for your kitties, but I need your address. You can email my gmail me at tania dot clucas and I'll get it popped in the mail.

Dog people have something in the works, never fear...

When I woke up this morning the blanket was in the kitchen with one corner in the water dish. Teufel looked up at me with this look of pride in his accomplishment.

I love the sound of kitties licking a catnip mat.
*rasp rasp rasp*

The sound makes me giggle-snort.

Nathan, could you tell the difference between wet from the water bowl and wet from cat drool?!

Hee! I love that Widget grabs Teufel briefly in a clear "settle down you little twerp" maneuver.

Skulker and Ophelia are clearly awesome. ;)