I Don't Actually Give A Rat's Ass, But I've Never Let That Stop Me From Whining Before.

First of all, consider this fair warning that today's post will be liberally peppered with profanities! It starts right the fuck now! Why? I'm just in a pissy mood. Go read something else if you're such a delicate flower.

And while we're on the subject, yeah, I know that all of the pictures in this post suck. I took them out the window while doing 50mph on the FDR Drive. I risked my life to get you these fucking pictures. How dare you bitch about the lack of quality.

First, let's start with U Thant Island. U Thant was the 3rd Secretary-General of the United Nations. He served from 1961 to 1971. Now, I don't care what you think of the U.N., but becoming Secretary-General and holding the job for ten years is something of an accomplishment. And how did the city choose to honor U (or is it Mr. Thant)? They named a fucking rock in the middle of the East River after him.

My picture of the island sucks, (the island is toward the right side of the frame just left of the pillar), but the one on the Wicki link is much better. (I bet some overachieving asshole actually got out of his car to take that picture.) 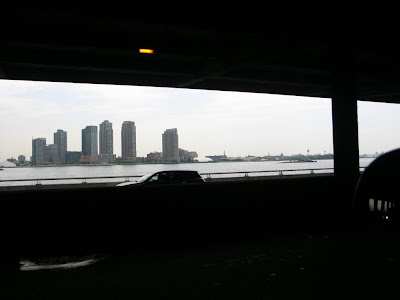 OK, let's move on. I'm sure I've mentioned this in passing somewhere or other before, but now I have photo documentation. It's really shitty documentation, but documentation nonetheless.

In 1994, Ari Halberstam was shot while in a van full of teenagers about to go over the Brooklyn Bridge. My memory of the event was that the shooter was just a crazy person, but the website says it was a terrorist. I won't argue. Anyway, the city decided to memorialize him...by naming the ramp leading from the FDR Drive onto the Brooklyn Bridge after him. I truly empathize with the wish to memorialize someone who's been murdered,...but a fucking ramp? I really think that's kind of pathetic...like those filthy teddybears and falling down crosses you see propped up along the highway where some yahoo fell asleep at the wheel and plowed into a tree. NYC has a couple of gazillion parks of varying sizes. They all need names. I think that might have been better.

The other thing that makes me crazy about this, though, is how many fucking times do they have to tell me that I'm on the Ari Halberstam Memorial Ramp.

Here's the first sign as you exit the FDR Drive. (The blue thing.) 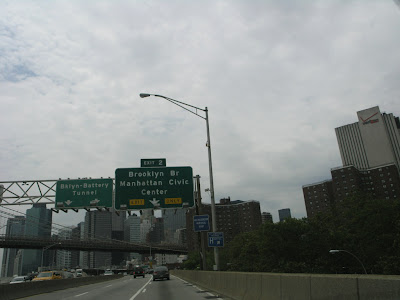 Then there's another one as you proceed up the ramp. 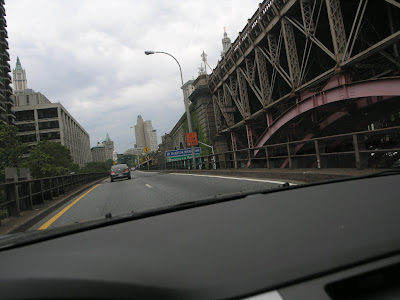 Here's three more as you get close to the bridge. Enough already. I know where I am. Perhaps you could put up this many signs telling me where the fucking bridge is in the first place. 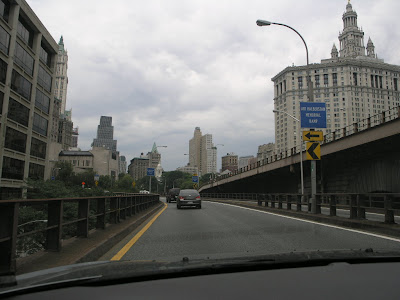 And what the fuck is up with the NYC Waterfalls? It's public art! There are four of these towers on the East River right now, one on a Manhattan pier (first picture), one under the Brooklyn tower of the Brooklyn Bridge, (second picture), one on a Brooklyn pier and a fourth on Governors Island. You don't get pictures of the last two, because weren't you listening when I told you I shot all of these while driving fast because I had an appointment to get to. Jeez, pay attention! 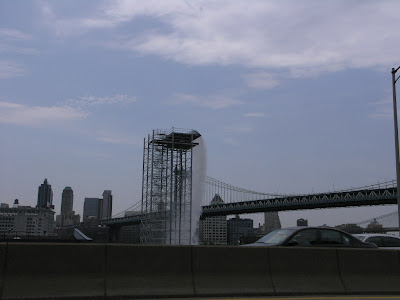 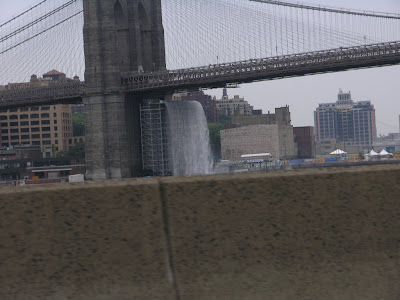 OK, so anyway, it's art and they light up at night and folks from out of town can Oooh & Ahhh and say pithy shit like, "Gosh, Gladys, we sure aint got nothin' like this back in Guthrieville". Well, I've got a couple of problems with this. First of all, setting them up and operating them for the next four months is going to cost $18 million dollars. Granted, most of that money is from private donors and who am I to tell anybody what they should be doing with their money. Go ahead, piss your money away any way you want. I don't give a shit. But $2 million dollars of this is being paid for by the City of NY. Why didn't I get a vote on this? I vote they reimburse me for getting my car towed a few weeks ago. Fuck waterfalls!

And the second thing. I got home the other day and guess what was waiting for me in my email? A notice from the office that issues Film Permits telling me that there are huge swathes of lower Manhattan and the Brooklyn waterfront where I won't be able to shoot until fucking October! (I have no idea why this turned into a negative when I converted it from a PDF to a JPG. Maybe the computer fairies didn't think it would match the crappy pictures if they didn't fuck it up a little. Maybe my couch is doing 50mph and I'm still risking my life for your edification. Ingrates!) 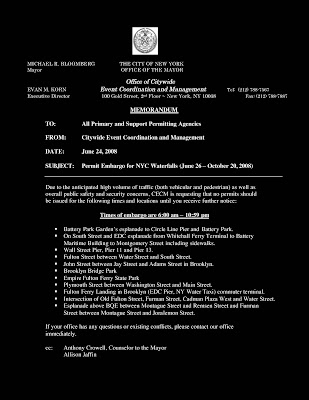 It's a good thing it's Friday.

Anybody got any suggestions on where we should go?

-It should be within about a 3 hour drive.
-It should include water (lake or beach).
-It can be a little on the rustic side, but not a dump.
-no Bed & Breakfasts...those creep me out, no end.
Posted by Nathan at 2:52 PM

Well fuck me running, if that wasn't basically a whiny-ass piss and moan post. Seems like you had a 'tude today, dude. You need to, like, have some liquid attitude adjustment, then just keep it cool, fool. Rest your weary feet on a fine, soft seat with a good cigar in a non-Bill Clinton sort of way. Tune in to the click and flick and become one with the tube as it drains your brain.

Hmmm, I believe a quote from Mystery, Alaska is appropriate:

John Biebe: You okay?
Mr. Walsh: No, I'm not okay! Do I look okay? The fucker shot me! What the fuck-ass fuck of a bum-fuck shithole town is this? I make a business call. I give him my card. And the hick-ass fucker shoots my foot off! Cock-fucking shit!

Me thinks somebody needs to pet the kitties ;)

Gotta run to the store and then feed the furry beasts. They're giving me looks like they might start chewing on my feet if I don't do my duty.

We were just there a few weeks ago.

Wow, you're couch can get up to 50 mph?! Mine only does about 35, but it gets fantastic mileage. Guess I shouldn't complain...

Try Point Pleasant Beach, NJ for the 4th. Nice town, plenty of crap to do, restaurants and bars and such. A great hotel is the White Sands, right on Ocean Ave. It's probably only a litte over an hour from Brooklyn from what I remember. I haven't been to your neck of the woods in a long time.

I know we've called a couple of places in Point Pleasant. No luck with rooms so far.