The previous post may have given you the impression that I had a...challenging day. Actually, truth be told, most of today was just fine. The only crappy thing was that I had to stop by someone's set in Harlem, and every way I tried to go, I'd run into construction delays and two different accidents that had the cops closing parts of roads for a while. I ended up having to drive way out of my way to get there, but that's just another day in NY. Not that big of a deal.

No, I just saw those things I posted about and got myself worked up for a little rant. It was kinda fun.

But even if I had had a crappy day, UCF would have put a smile on my face. The mail came late today and there were a couple of nice surprises there.

First we have a post card from Jeri with a lovely pic of Yellowstone. If you can't tell, the picture is of Mammoth Hot Springs. On the card, Jeri says she's surprised there hasn't been more filming there. She asks if permits are a problem. Answer: I don't know. I haven't shot in many National Parks, but I didn't have any big problems with the ones I did use. (OK, the Park Rangers at Grant's Tomb threatened to have me arrested when we shot the scene of Howard Stern that was supposed to be on the steps of a Washington D.C. landmark. We had our permits in place but we may have neglected to mention the girls in bikinis who would be gushing all over Howard. They didn't find it amusing.) Actually, Jeri, I think you answer your own question when you mention the huge crowds and the backed up traffic. 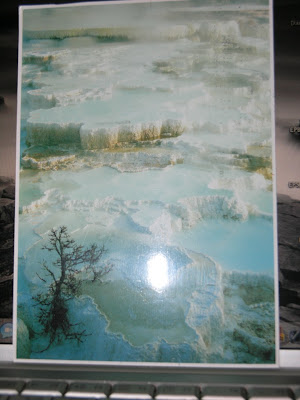 Also in the mail...my loot from winning Week 1 of Todd Wheeler's Summer Reading Contest. Two book marks which will come in very handy. I'm not going to show you the dog-eared pages on the book I'm reading, but I really should be ashamed of myself. Anyway, one of them is the really nice cloth one you see on the right and the other is the Todd-Wheeler.com one on heavy card stock. 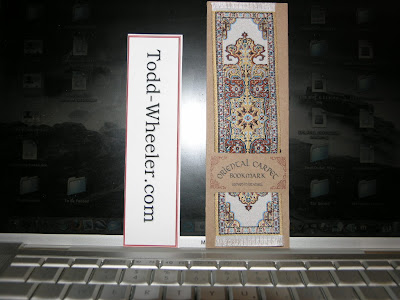 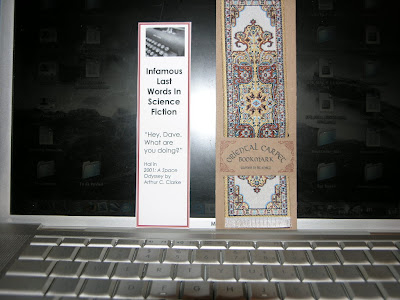 BTW, I don't know whether or not Todd considers himself a UCFer (and as I've said, folks are free to opt out if we embarrass them too much), but I checked and he was commenting hear in my first two weeks, so he's absolutely in as far as I'm concerned.

Janiece...I think I'm owed another snag on the hairball.
Posted by Nathan at 6:43 PM

I'm honored and humbled and shall do my best to uphold all that UCF stands for.

I'm fairly certain it stands for throwing out the most jarring non sequitur you can come up with. I'll have to get back to you after discussing with the executive committee. (And good luck getting them together.)

The UCF stands for something? I thought we just sat around with our feet on the coffee table throwing virtual popcorn at each other.

Glad the postcard got there so quickly. I realize I'm being an utter copycat of Anne - but hey, it was a really fun idea.

Hotel wireless sucks. Totally and completely. I should be back online with some actual reliable bandwidth next week. Have a better weekend!

The UCF stands for something? I thought we just sat around with our feet on the coffee table throwing virtual popcorn at each other.

Well that, too, but of course we stand for something. The UCF is here to defend the defenseless! Befriend the friendless! And to defeat...the defeatless!

I thought we showed up at each others places and drank all the beer and ate all the chocolate.

After all, what are friends for?

I hear some folks have been leaving graffiti messages. Stuff like

For a good time, call Charlotte.

Frankly, I think that crosses the line.

(Not-Sophie rises up in righteous indignation)

I did NOT write that!

Heh. Thanks, Jeri, for the credit of bringing postcards to the UCF, but from now on there will be no protests of copycatting! It's just one of those cool things the UCF does for each other.

Beer is not copycatting either.

(To be explained later)