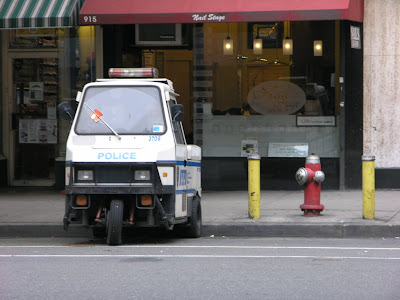 I'm guessing that is a meter maid vehicle?

That's an NYPD police cushman parked around the corner from the precinct.

Parking and Traffic enforcement are part of NYPD.

It looks a little like a fireman's training course. "QUICK! Which one is the fire hydrant!"

Aw, give 'em a break. It's not like it's easy to drive around in a glorified scooter all day. They can't feel good about themselves to begin with.

Here's part of what I find amusing.

A few years back when the city incorporated Parking Enforcement into the Police Department, the (then), Brownies campaigned to be allowed to carry weapons. Their rationale was that 'meter maids' were in danger from irate motorists and they were backed up by the fact that at the time, there had been a rash of folks beating up Brownies when they caught them writing tickets.

The NYPD response, to paraphrase, amounted to "Uh, no! We do not want a bunch of semi-literate civil servants running around with guns. They can have the uniform, because that affords them more protection under the law, but no hardware."

So, cut to seeing this cop's Cushman with the ticket. Every ticket includes the name of the traffic agent who wrote it. I'm guessing someone's getting a visit today.