I had to go shoot a few things in Dumbo this morning for the show I'm working on. "What the hell is Dumbo?", I hear you all asking. Well, here in NYC, we have a penchant for using semi-acronyms to describe a neighborhood. You've all heard of Soho...South Of Houston. And Tribeca...the Triangle BElow CAnal. Well, Dumbo is Down Under the Manhattan Bridge Overpass, (on the Brooklyn side).

So, anyway, I decided, as long as I'm out running around with my camera, it won't take any time to snap off some extra shots. They might inspire a blog post. And as you all know, anything that gives you an idea is a good thing.

So I walked by this sculpture I'd never seen before. I've actually been a big fan of the artist since I discovered his stuff about 10-15 years ago. Look around his site a bit. There's some really nifty stuff. 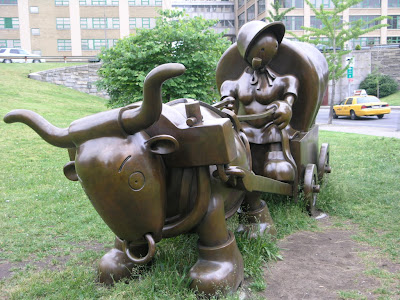 For those of you who don't bother to check the link, I wouldn't want anyone to accuse me of failing to credit the artist. TaaaaDaaaaa! 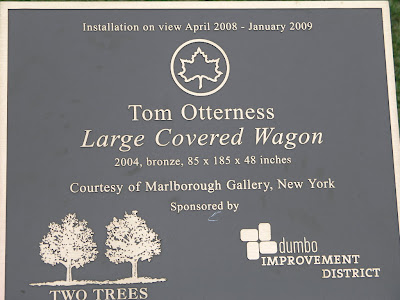 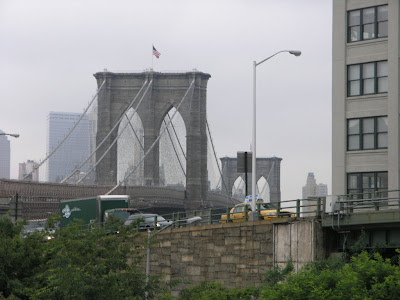 And another one. I don't have anything momentous to say about the bridge that other people haven't already said, but it really is a magnificent and beautiful bridge. Think about this: A bridge that was designed late in the 19th Century is accommodating three lanes of traffic in each direction 8 years into the 21st Century. And that's within the width of those arches that were designed for trolleys and horse-carriages. I'm impressed. I suppose they could put on a second level between the arches (which ain't gonna happen to a landmark like the Brooklyn Bridge), but you can't widen those stone arches. 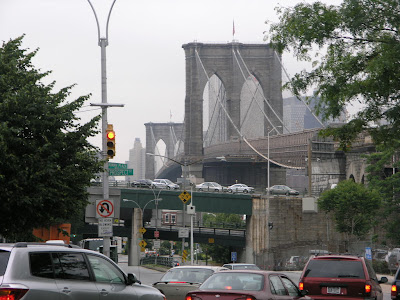 You may think this is another picture of the bridge, and technically, you'd be right, but this is really here because it's the street where they shot the scene in Scent of a Woman where Al Pacino is driving-while-blind. Note the cobblestones and the old freight rail tracks. 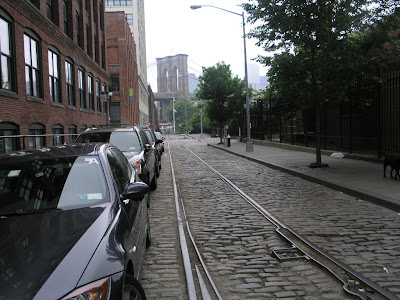 Here's a pan showing the same street on the right and part of the underside of the Manhattan Bridge.

Well, as long as I'm here and I've mentioned Dumbo and shot one bridge, I may as well get some more coverage of the bridge for which the neighborhood is named. 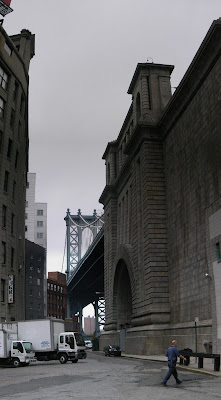 And here's from the other side of the bridge. Note the street sculpture and the out door cafe. 10 years ago, you wouldn't have wanted to live in this neighborhood, because, among other things, there was absolutely nowhere to get anything to eat or drink, buy groceries, or any of the other stuff you like to have near where you live. A lot of the old buildings have been renovated into luxury apartments. The people have flooded in and the stores have followed. 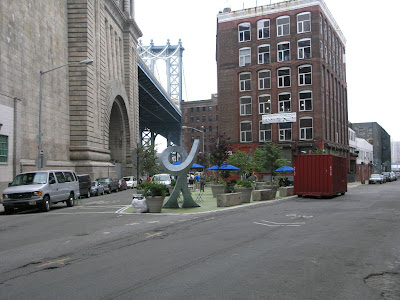 And there are more than a few new buildings going up alongside the old factories and warehouses. 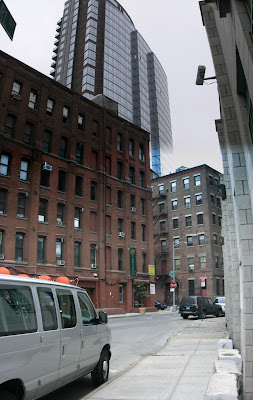 Oooh! Someone's shooting here this Sunday. Actually, as you might guess, this neighborhood gets more than it's fair share of filming. Hey, it's unique. According to IMDB, Castle is a new TV show starring Nathan Fillion, which, I suppose, should excite some of you Firefly fans. Anyway, getting signs like this posted is the job of the Parking Coordinator...who works for the Location Manager...who is sometimes, Me! 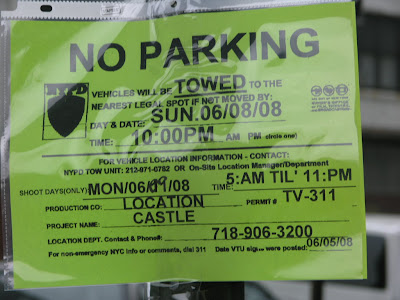 By now, you're all definitely wondering if I've got any common theme that will reveal itself. Be patient with me just a little longer and we'll get to it. But first...this! This is an intersection on the edge of Williamsburg where you can always see a bunch of Hassid's waiting around. (There are usually a lot more than this.) Hassids who have cars or mini-vans will pull up, roll down the window and holler "West 34th Street" or wherever, and anyone going near there piles in. I once drove by this place with the Teamster Captain of a movie I was on. We joked about setting up a hidden camera and then having him show up there in Hassidic clothes to see if he'd get a ride. Oh, did I mention he's 6'10", 300-something pounds of muscle and a very dark-complected black man? We both thought that would be funny and we still threaten to do it some day. 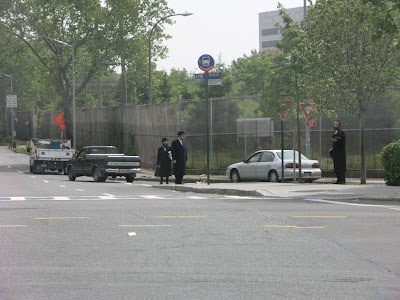 Then I had to go where my job just started shooting today. I was out on the roof (don't ask why), and shot you a picture of this restaurant. I have no evidence to back this up but I've always believed the place is mobbed-up and that the name is just a clever play on "John Doe".

And guess what, the roof has another view toward the Manhattan Bridge and the Brooklyn Bridge. (The Manhattan Bridge is the nearer one and that's the south end of Manhattan in the picture. Once upon a time, the World Trade Center would have dominated this shot.)

And it suddenly occurred to me. My blog post is about ways to get across the East River! 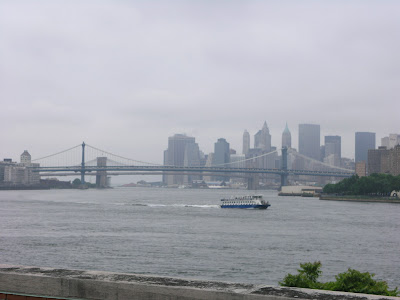 Because, if I turned about 150º, I'd be looking at the Williamsburg Bridge. The Williamsburg Bridge is, by far, the ugliest of the East River crossings. And unlike the Brooklyn Bridge, it was not built with the foresight to continue to be a wonderful way to travel into the 21st Century. It's got two lanes in each direction. Trucks can go on the Brooklyn-bound side, but the two lanes are so narrow that most of them straddle the two lanes. I feel crowded when a car passes me on it. 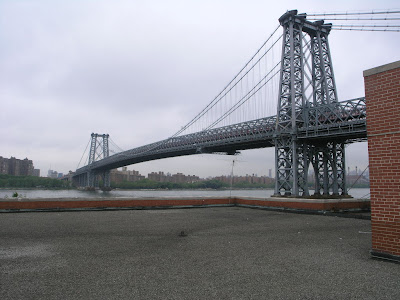 Well, I've come this far, and I only have one more bridge to show you. It's really not far out of my way, so I went there. This is the Queensborrough or 59th Street Bridge. It's the one you used to see in the title sequence for Taxi. It's being repainted or having some of its never ending construction going on, but it's really an attractive bridge with a fantastic view of Midtown as you cross it. 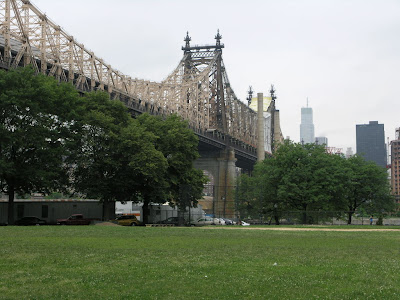 Oops! I almost forgot. There's another way to cross the East River. I give you the least photogenic of the options...The Queens-Midtown Tunnel. Trust me...it's under there! 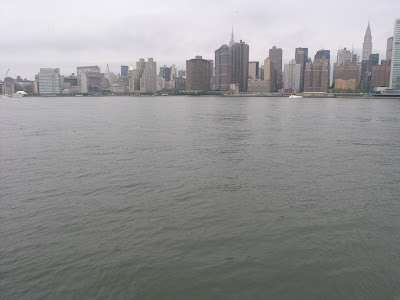 Well thanks for bearing with me on this wandering post. And please don't miss the next post down. You have to go visit the first blog where I knew the blogger in real life first!
Posted by Nathan at 3:17 PM

Nathan. Stop it you're making me home sick!

Can a person be homesick for such a "sick home" as I once had, only 1/2 a block from the "Giando" Restaurant, (pictured) under the Willy'sburg Bridge, (literally under the bridge)!?!

Arrgh! Can I be homesick for a home where I could see what my "neigbors" were having for dinner by looking out my window down onto the dirty mattress on the street below? Hi guys...Once I saw Chinese Food cartons with chopstick sticking out of them on that "quaint" little set-up under the bridge. Perfect.

Arrgh! Can I be home sick for a place where I once saw a dirty pigeon with a broken wing eating the remains of...yes, a Chicken McNugget?!

Well...you've done it. I don't know how. Maybe you're using an anti-scuzz filter on your camera, or maybe I've been away from NY (BROOKLAND) for WAY too long.

I'm sorry. Is this more like you remember things?

I've never been to New York beyond flying in and out of JFK, although I have a friend who lived and worked in New York for 15 years.

Your pictures are a great way for me and others to see parts of New York through your eyes.

Keep up the good work!

Thanks for the wonderful excursion, Nathan, from another displaced Brooklynite (ok, willingly displaced...)

... that was me being clever with different ways I can identify myself...